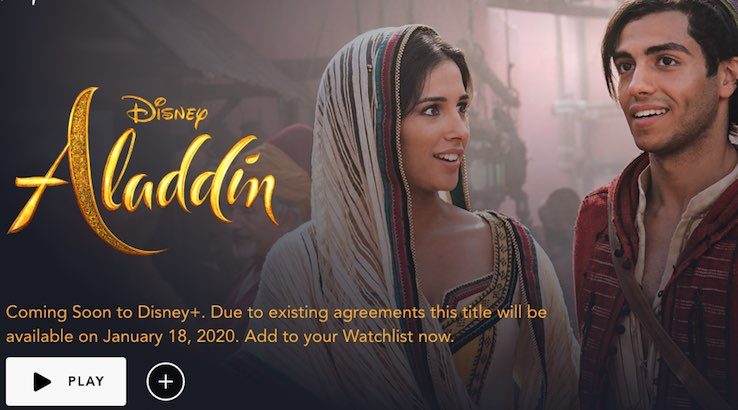 Disney+ offers subscribers plenty of content to binge, from classic animated flicks to original hit shows like The Mandalorian. However, some popular titles were missing from the streaming service at launch. Among them, the live-action Aladdin remake, which opened in cinemas back in May.

Thankfully, the wait to stream the box office hit on Disney+ is over. The Disney+ platform released Aladdin on 18 January 2020. It joined several other big titles coming to Disney+ in 2020.

Additionally, Disney is working on a spin-off revolving around Aladdin character Prince Anders, which will star Billy Magnussen.

The live-action Aladdin remake was directed by Guy Ritchie and stars Mena Massoud, Will Smith, Naomi Scott, Marwan Kenzari, Navid Negahban and Nasim Pedrad, among others. The story revolves around the title character, a street urchin who stumbles upon a magic lamp that contains a genie. With the genie’s help, he hopes to be able to impress the feisty Princess Jasmine, as long as he can best a deceptive sorcerer who wants the lamp for himself.

Aladdin was a great success for Disney, managing to become the seventh highest-grossing film of the year. There are already rumours of a sequel, which isn’t surprising given the film’s earnings, which surpassed US$1 billion worldwide.

Streaming platform Disney+ offers subscribers a generous content library, with titles not only from Disney itself, but also subsidiaries Marvel, Star Wars, Pixar and National Geographic. In other words, you can stream iconic Star Wars movies, blockbusters like Avengers: Endgame, Disney Channel series, original content like Lady and the Tramp, plus plenty of classics from the Disney vault.

In addition, the service comes with an intuitive interface and several fun features meant to make streaming your favourite Disney titles as easy as possible.

A subscription to Disney+ costs $9.99/month.