Getting around in Los Angeles

The nuts and bolts of navigating LA like a local.

While parts of downtown LA and Hollywood are lovely to see on foot, you’ll need to hop on the Metro to access more scattered attractions and neighborhoods. Plan your itinerary in advance, because some off-the-grid points may be better-accessed by car.

Sometimes public transportation in LA gets a bad rap. Less than one-twelfth of residents use it on a daily basis — a stark contrast to NYC, where a quarter of the population takes public transit every day. LA locals may shy away because rail stations can be inconvenient to get to without hopping on the bus first.

In LA, the subway and light rail are both referred to as Metro Rail lines. Locals use both to get where they need to be.

A single-ride fare with the LA Metro is just $1.75, though you can buy a day pass for $7 or a weekly pass for $25 — cheaper than the cost of renting a car. You’ll load fares onto a Metro TAP card (these cost $2 plus fare) and swipe for entry at most stations. Catch a ride around town via three different bus services:

Pro tip: Download the LA Mobile app, which lets you buy, store and use tickets with LADOT Transit.

How to plot your routes:

Instead of poring over a map, use these tools to help you get there seamlessly:

There’s no shortage of wheels for rent or hire to take you directly to your destination.

More than 2,300 taxis cruise through Los Angeles. Before climbing in, make sure the cab features an official City of Los Angeles Taxicab Seal: 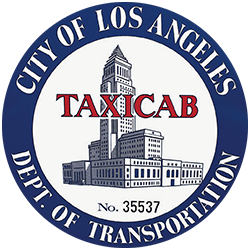 It’s a good idea to book or call a taxi in advance, since hailing one from the side of the road is extremely difficult and even illegal in some areas, including downtown.

Uber and Lyft reign supreme in Los Angeles and tend to be cheaper than cabs overall. Both offer transport from LAX.

You can also rent a bicycle from a local shop, though prices might be higher than sticking with Metro Bike.

Hop on one of the many available tours, whether you’re hoping to get a behind-the-scenes look at Universal Studios or are more interested in a historical retrospective of old-town LA.

Car rentals in Los Angeles
Depending on where you’re visiting, a car could save you the hassle of coordinating public transport. Here are the major car rental services in LA:

Renting a car from Enterprise in Los Angeles costs an average of $44 per day, according to data from Kayak.com.

Price data obtained July 2019. Prices are subject to change and should be used only as a general guide.

Heed these insider tips for a smooth ride when you get behind the wheel:

Centrally located options for touching down in LA include:

If you’re not renting a car, consider booking a shuttle from the airport to your final destination. Viator and Jayride both offer quick, cheap transport.

Public transportation in Los Angeles is well-suited for visitors hopping between popular sites, but travelers planning off-the-beaten track excursions might be better-suited renting a car. Once you plan your itinerary in the City of Angels, find places to eat and drink.

Hotels in Los Angeles Cheap flights to LA for 2021