We explain how agreed value car insurance works, the likely costs involved and why it could be a good bet for classic car owners.

What is agreed value car insurance?

As standard, most car insurance policies base the maximum amount they’ll pay out for a claim on the car’s market value. This is equivalent to the car’s standard retail value, taking into account depreciation over time. The market value of your car is recalculated whenever you make a claim.

When you take out agreed value car insurance, you agree on the value of your vehicle with your insurer, and the car is insured for this amount. The agreed value of the car will not automatically decrease over time.

It’s most often used for classic or unusual cars where it’s harder to establish a realistic market value.

An agreed value policy usually comes into its own if you need to replace, rather than repair, the car after an incident – if it’s written off after a crash or stolen, for example. Agreed values are usually higher than you’d receive based on the estimated market value. It means that if you’ve spent significant time and money restoring a classic car, for example, the extra value you’ve added is taken into account. The higher the agreed value of your car, the higher your premium is likely to be.

Classic car values can fluctuate over time. In some cases, prices may go up as well as down. You can adjust your agreed value at policy renewal time to take account of this. Some providers, though not all, may let you make adjustments mid-term too.

The key difference in cover is that you agree up-front what your car is worth, rather than it being dictated by external factors.

Example: Up in flames 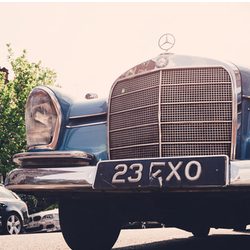 John had spent nearly 15 years restoring a classic Mercedes-Benz 600, which he kept parked in an exterior shed of his property. John had the car insured under agreed value cover for £90,000.

Late one evening, John awoke to see the garage up in flames from his bedroom window. By the time local firefighters had arrived, all that was left of the garage and car were mounds of ash and scrap metal.

The insurance company declared the vehicle to be a total loss. John is paid the agreed value of £90,000. If he’d had a car insurance policy based on market value, the pay-out would have likely been much lower.

Are there any exclusions for agreed value car insurance?

Some additional pitfalls you may encounter with agreed value insurance include:

What are the different types of agreed value car insurance?

Who are agreed value policies best for?

Agreed value insurance is mainly for rare or unusual cars, where insurers may not have accurate information on a car’s true cash value, or where a car is worth more than average compared to those of a similar age. Examples include:

What do I need to get an agreed value car insurance quote?

In addition, you’ll also need to provide evidence of your car’s resale value.

How do I get evidence of my car’s value?

To get agreed value car insurance based on the likely sale value of your car, you’ll need to provide the insurer with evidence of that value.

Some insurers may accept a price you provide directly, backed by evidence such as small ads for similar vehicles in a similar condition. You may also need to supply photos of the car, inside and out, plus the engine. Bills for recent restoration work you’ve had done may support the fact it’s worth more than a car of its age would otherwise be.

Yes. Reasons for this include:

As with any car insurance, there are some tactics you can use to keep costs down. These include building up a no-claims discount, keeping mileage down and parking your car in a secure location. But you’ll need to weigh up the peace of mind of having agreed value cover against whether your car is unique and atypical enough to justify the extra cost.

What affects the cost of agreed value car insurance policies?

In addition to the car’s condition and stated resale value, the specific cost of premiums depends on a range of factors, including:

If the market value of a car is easy to establish, and would cover you for the cost of a like-for-like replacement, it’s probably not worth paying extra for an agreed value policy. This is most likely to apply to:

Where can I buy agreed value car insurance?

Agreed value can be tricky to find. It is much less common than market value cover, and may not be available from many mainstream car insurance providers. However, there are a number of smaller car insurers that specialise in agreed value car insurance.

If you’re a current member of a classic car owners’ club, or a similar club for enthusiasts, it may be able to recommend a specialist policy for your model of car.

How do I claim on agreed value car insurance?

The process for claiming on agreed value insurance should be very similar to making a claim on standard car insurance. The exact details will vary slightly by insurer. Check the small print and make sure you tick all of the right boxes. These are likely to include contacting your insurer as soon as possible after an incident, taking photos of damage and getting the details of any other drivers involved in an accident. If there’s any criminal activity involved, such as theft or vandalism, you’ll also need to report the crime to the police.

The main difference is that, if your car is written off and your claim is successful, you’ll receive the full agreed value of your car, rather than the current market value.

Agreed value car insurance is pricier than policies based on a car’s market value. If you own a mainstream, modern car, it’s probably not necessary. But for owners of classics, or anything a bit rarer or more unusual, agreed value insurance could offer peace of mind that you’ll get the full value of your car back if its written off or stolen.

The offers compared on this page are chosen from a range of products we can track; we don't cover every product on the market...yet. Unless we've indicated otherwise, products are shown in no particular order or ranking. The terms "best", "top", "cheap" (and variations), aren't product ratings, although we always explain what's great about a product when we highlight it; this is subject to our terms of use. When making a big financial decision, it's wise to consider getting independent financial advice, and always consider your own financial circumstances when comparing products so you get what's right for you.
*Based on data provided by Consumer Intelligence Ltd, www.consumerintelligence.com (July ’22). 51% of car insurance customers could save £341.77
Was this content helpful to you?
Thank you for your feedback!

Ceri Stanaway is a researcher, writer and editor with more than 15 years’ experience, including a long stint at independent publisher Which?. She’s helped people find the best products and services, and avoid the pitfalls, across topics ranging from broadband to insurance. Outside of work, you can often find her sampling the fares in local cafes.