What you need to know about withdrawing and spending korunas in the Czech Republic.

Like so many destinations in the region, westernization in recent years has lifted the living standards, monthly salaries and daily costs, which in turn has increased expenses for travelers. Although the Czech Republic is not as cheap as it used to be, with local know-how and a bit of travel savviness, your visit there doesn’t need to be expensive, either.

How much should I budget to travel in Czech Republic?

Although the Czech Republic still enjoys a lingering reputation as a bargain destination, in reality prices have risen considerably in recent years. Travelers will still find it rather affordable in comparison to western European countries. Budget travelers can get around the city for as little as $40 a day, while midrange travelers should plan on budgeting $90 or more.

How to send money to Czech Republic

Which should I opt for: travel card, debit card or credit card?

People traveling to the Czech Republic will find that debit, credit and travel cards can be used throughout the country, especially in major cities such as Prague, Brno and Ostrava. Visa, Mastercard and American Express products can be used for purchases and at ATM machines (bancomats) for withdrawals.

In Prague, cards are accepted at restaurants, hotels, supermarkets, retailers, train and metro stations. Bars and small eateries are cash only. Outside the capital and cities, you’ll need cash more often. Most Czech banks don’t charge ATM usage fees (non-bank affiliated ATMs generally will) so a product which waives the currency conversion fee and international ATM withdrawal fee is most suited for a trip to the Czech Republic.

Travel money options for Czech Republic at a glance

How different travel money products work in the Czech Republic

According to a report published in the New Europe Investor, the Czech Republic is the number one country in the European Union for contactless card payments, so load your credit cards onto your smartphone for simple payments.

Unfortunately, no US travel cards allow you to load and spend in Czech koruna.

Look for a card like the Chase Sapphire Reserve® that waives the fee for foreign transaction . This card features complimentary travel insurance when you charge your flight. It also protects you with anti-fraud guarantees. Avoid using your credit card to withdraw cash if possible. This will be considered a cash advance and will cost you a fee and will attract high interest immediately.

Using a credit card in the Czech Republic

Taking cash with you to Czech Republic

While cards are widely accepted, there are a handful of times when you’ll need cash — markets, hole in the wall bars, small transactions at some stores and rural areas are all cash only.

Greg visited the Czech Republic for the first time on his last trip to Europe. He started his trip in Prague and visited Kutna Hora, Plzen (the home of Pilsner!) and Cesky Krumlov.

Greg took these cards with him:

Why did you take these cards?
Greg used the Capital One 360 because he wanted to take advantage no international ATM fees. The Capital One 360 card also lets him spend overseas without paying extra for foreign transactions.

He applied for the Barclaycard to get the 40,000 points for signing up and ended up using this account to pay for his flight so he could be covered by the complimentary international travel insurance feature.

Where could you use your cards?
There were a couple of times where he couldn’t use his card when he was having a beer at old town, but he could pay with his card when he went out to eat at restaurants and when he bought food from supermarkets and convenience stores.

He says that he could use his card in less places in Cesky Krumlov and Kunta Hora than in Prague. He booked the Pilsner Urquell brewery tour online using his debit card and paid cash for beers when he was there.

What’s your travel money recommendation?
Greg says it’s worth the effort applying for the Barclaycard. The credit card worked everywhere he tried to use it, and he says you’ve got a lot to gain from being a Barclaycard member.

Do you have any travel money tips?

What is the official currency of the czech republic, the euro or the czech koruna?

A full member of the European Union since 2004, The Czech Republic has yet to introduce the euro as the official currency. The euro acts as a kind of unofficial currency in the Czech Republic, often readily accepted, sometimes even more than cards. Unless you are sure of the exchange rate between the euros and the koruna, you should pay with koruna to be sure you get the best rate.

Getting familiar with banknotes 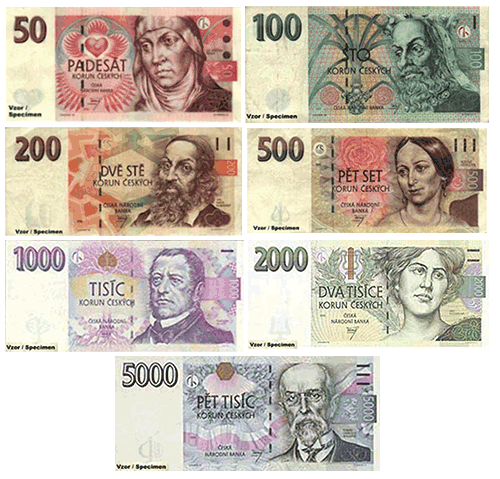 Buying Czech koruna in the US

It is likely that your bank can sell you koruna before you travel. You can also buy koruna from Travelex and other foreign exchange providers in shopping centers and airports. The main difference between a provider like Travelex and your bank is that the bank fees are often much lower.

It is easy to get cash exchanged in Prague and all over the Czech Republic, even in smaller towns. Look for the word “valuty” meaning change. Some exchange places will charge a flat fee for the service and others will charge a commission.

A commission is more suitable if you are changing a small amount of money and a fixed rate is better for larger amounts.

Stay away from the exchange places in the Old Town, Wenceslas Square and other tourist centers as they often have poorer exchange rates and higher commission designed just for tourists. Banks generally charge two percent.

While emergency cash assistance from companies such as Visa and Mastercard can give you the money in your account if your card is lost or stolen, this request can take a up to a couple of days to process. Travel friendly debit cards combine some of the benefits of a travel card minus the fees. You might want to take a credit card so you can access an emergency line of credit — there will also be times when you’ll need to put down a credit card as a security deposit.

Find travel insurance for your trip to Czech Republic