South Korea is a modern and cosmopolitan country, with exciting culture and food. What’s the best way to pay for your travel in South Korea? Use credit.

According to the Bank of Korea, only about 20% of financial transactions in Korea are made with cash. Between credit card, debit cards and the popular T-money cards, the South Korean central bank has an ambitious goal of being cashless by 2020.

We’ll help you navigate the best cards to bring and help save you money on fees.

South Korea uses the T-money card to streamline payments for buses, taxis and the subway. They recently extended those payments for retail and restaurants, making it the most popular way to pay your way in South Korea.

Like a debit card, it’s connected to your bank and makes automatic withdrawals each time you make a payment. You can use the T-money card on your smartphone, making payments as easy as a tap of your phone.

From 2016–2018. South Korea is promoting travel with it’s Korea Tour Card. For less than $4, it’s offered to tourists for all the benefits of the T-money card, but with additional discounts to tourist attractions and shopping.

What should I budget for my trip to South Korea?

South Korea can be considered expensive compared to budget destinations like Thailand, Cambodia and Vietnam. But you’ll find it less pricey than other developed countries like Japan.

Expect to spend up to $50 daily if you’re traveling on a tight budget. If you loosen those purse straps, you can find yourself spending up to $100 to $300 a day.

Travel money options for South Korea at a glance

*Prices are indicative and subject to change

South Korea is one of the fastest-growing global economies and the fourth-largest economy in Asia. Remarkably it was able to rise from one of the world’s poorest countries to a highly developed nation in only one generation.

Historically, the US dollar has been stronger against the won. Over the past decade, the USD has generally been worth between 1,000 and 1,200 KRW.

You can use your Visa or Mastercard and travel money card almost everywhere in South Korea. While you can use debit cards to make purchases, not all ATMs accept foreign cards. Always look for the word “Global” on ATMs before you try it.

Mobile payments are wildly popular with the youth in South Korea. So, load your credit cards onto your smartphones and leave your credit cards back at the hotel when you go out in big cities. That said, always carry a bit of cash on you for tips or smaller restaurants and street food.

Travel money options for South Korea at a glance

Visa, Mastercard and American Express credit cards are accepted throughout much of South Korea. You want to find cards that will waive the foreign transaction fees, offer travel benefits and insurance to get the most from your spending. You’ll find that Visa and Mastercard use their own exchange rates that are close to the market rate, and better than the rate offered on most prepaid travel cards.

A debit card is a good way to access your cash while in South Korea, though be aware that not all ATMs accept foreign debit cards. Look for the “Global” sign on machines that will take your cards. Also, many ATM machines shut down after 11 p.m.

A debit card is a good choice if you want to avoid racking up debt and carrying a balance on your credit cards. It’s best if you can find a card that waives international teller fees.

Though many of the travel cards you find on the market will carry South Korean won, South Korea has its own travel card. Buy the Korean travel card for less than $4 and get discounts on museums and shopping, covered by travel insurance and pay for food, travel and entertainment.

Traveler’s checks once had a place — in a money belt tucked under your shirt. Today, this travel money product is a hassle to buy, carry and cash. The main benefit of a traveler’s check is security because only you can cash your traveler’s checks and they can be replaced if lost or stolen.

However, credit cards, debit cards and travel cards have taken over from traveler’s checks. Your bank will give you your money back if you’re the victim of card fraud.

Paying with cash in South Korea

Although card payments are the norm in South Korea, street food, small restaurants and some public transport only accept cash — some merchants also won’t take cards for purchases under 10,000 won: about $10.

You can make withdrawals at Cash Dispenser Machines or visit an exchange office or bank to get foreign currency changed when you arrive in South Korea. Banks are open from 9 a.m. to 4 p.m. weekdays.

There are two types of ATMs in South Korea, those that accept foreign cards and those that don’t — cash dispenser (CD) machines generally accept international cards. If you insert your card into an ATM and it gives you an error message, you’ll need to search for another machine.

Look for the “Global” logo on the front of the ATM and select the English option before you insert your credit, debit or travel card. These types of ATMs are common in public places such as bus and train stations, and are out of service after 11 p.m.

Local ATM operator fees will apply. You’ll save on each withdrawal if you find a debit card that waives foreign transaction fees. 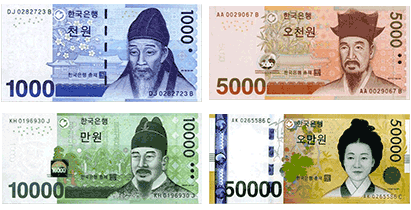 On his last trip to South Korea, Peter visited Seoul for one week before heading to Hong Kong. While in Seoul, he took a flight from Gimpo International Airport (Western Seoul) to Jeju Island so he could see the Seongsan Sunrise Peak, one of the New Seven Wonders of Nature.

Where could you use your cards?
Peter says card acceptance was much the same as at home — convenience stores, supermarkets, restaurants, hotels, train stations and even vending machines.

What about using ATMs?
Peter had to look for Global ATMs that accept international cards — fairly easy in larger cities. He found he needed more cash on Jeju Island, so he withdrew about 300,000 KRW before he arrived.

What travel money tips do you have for South Korea?
Peter purchased a Korean travel or T-money card to make payments easier. It can be used to pay for goods and services at most Korean merchants. What’s more, Peter says you can get a discount when you use the T-money Card to pay for public transport.

Buying currency in the US

The import and export of local currency is allowed up to KRW 8,000,000, or about $7,000 USD. Be sure to declare any incoming money greater than $10,000, including traveler’s checks. And you can’t take out more than you bring in.

You can always send your money to South Korea ahead of time with a money transfer service and have it waiting to be picked up when you arrive.