Using a credit card in Egypt

Make the best out of your plastic and cash during your holiday in the shadow of the pyramids. 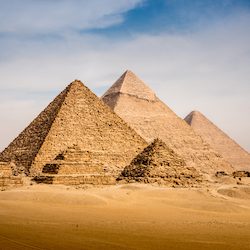 Santander All in One Credit Card

Whether you’re going to snorkel among the colourful fish of the reef or visit the symbols of Egypt’s thousand-year-old history, you’ll need to sort your money out before travelling.

Egypt is still a mostly cash-based society. Although credit card payments are becoming increasingly common and will be taken by many hotels and restaurants in Cairo or other tourist locations, you’ll need cash to enjoy the local cuisine or shop for textiles and spices at the souk.

The local currency is the Egyptian pound. In 2016, the government unpegged it from the US dollar, thus freeing the exchange rate and causing the Egyptian pound to lose almost half of its value – however, the rate has been comparatively stable ever since.

Bargaining is common practice in Egypt, so carrying cash will also ensure that you can get the best deals while shopping.

Egypt’s network of ATMs has improved significantly over the years, and you can also find some belonging to the Western banks that operate in Egypt, such as HSBC and Credit Agricole.

However, while you won’t have any difficulties in finding an ATM in Cairo or Alexandria, things may become trickier if you’re heading for a more rural area, or (unsurprisingly) if you’re planning an excursion into the desert. As a general rule, don’t wait until you run out of cash to get some.

ATMs will often charge their own fee for cash withdrawals, although it can depend on the bank they belong to. They’ll also ask you if you want them to handle the currency conversion – it’s usually cheaper to refuse and let your bank at home do it, especially if you’re using a debit card that doesn’t charge foreign transaction fees.

Goods and services come comparatively cheap in Egypt for British travellers, so it would be a shame not to indulge in some local shopping. For that, you’ll definitely need cash. Be prepared to bargain the price for a while, sometimes even over a cup of mint tea – if you’re in a hurry, you’ll probably end up paying a bit more.

Some tours or services will display prices in Western currencies, usually US dollars or euros. However, they are not accepted everywhere, and you’ll probably get a better rate if you simply change your currency into the local one beforehand.

Since the currency’s value crashed in 2016, coins smaller than LE1 have become less and less common. LE5, LE10, LE20, LE50, LE100 and LE200 notes are all commonly used. It’s best to always keep some change ready as tipping is also expected pretty much everywhere.

Is it safe to use my card in Egypt?

You should follow some basic rules to ensure the safety of your card, particularly when withdrawing money from an ATM:

When weighing the pros and cons of cash and card payments in Egypt, you should take into account the range of fees that credit cards can incur:

Here’s a fairly typical section from a credit card’s terms and conditions showing non-sterling usage fees that are pretty standard.

Additionally, you can get an idea of costs by using these online currency conversion tools from Mastercard and Visa.

What is a cash advance fee?

How to prepare before travelling to Egypt

There’s no point in exchanging your money before leaving – you’ll usually be offered a better rate once you land, especially if you avoid doing it at hotels and airports. However, there are a few things that it’s better to sort out well in advance:

How to use a credit card in …

We show offers we can track - that's not every product on the market...yet. Unless we've said otherwise, products are in no particular order. The terms "best", "top", "cheap" (and variations of these) aren't ratings, though we always explain what's great about a product when we highlight it. This is subject to our terms of use. When you make major financial decisions, consider getting independent financial advice. Always consider your own circumstances when you compare products so you get what's right for you.
Was this content helpful to you?
Thank you for your feedback!

Valentina Cipriani was a writer at Finder UK. She wrote news, features and guides about banking and credit cards, helping people to improve their financial lives. She holds an MA in International Journalism.