A visitor’s guide to purchasing prepaid SIM cards in Myanmar 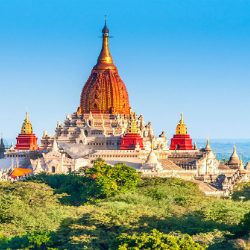 Myanmar, formerly known as Burma, borders India, Thailand, Laos and China with a population of 51 million. It attracts many visitors for both business and tourism purposes. If you are traveling to Myanmar, consider investing in a prepaid SIM card to mitigate your voice, text and data roaming expenses. You can purchase a starter pack with MMK300 credit for MMK1,500 (US$1.10).

Until just a few years ago, Myanmar was controlled by a military force and mobile access was very limited. The country allowed two external companies to come and build GSM networks in 2013. Beginning in April 2017, customers must register their SIM cards using either a student card, driver’s license, passport or national registration card (NRC). Any unregistered SIM cards will be blocked.

There are three mobile networks in Myanmar with a fourth due to open in 2018. The three currently in operation are:

Myanmar Posts and Telecommunications (MPT) operates under the slogan: “Moving Myanmar Forward”. That wasn’t always the case for the state-owned provider that owned a monopoly during the military regime and was charging US$200 for a SIM card with data as recently as 2013.

MPT has a large retail outlet conveniently located in the Arrivals corridor at the Yangon International Airport. The starter pack costs MMK1,500 and comes with MMK300 in credit. You can add another MMK300 in credit at the 30- and 90-day marks.

You can activate your SIM card by putting it in the phone, turning it on and either making a call or topping-up your card. After one of these actions is taken, you’ll receive an SMS message confirming your activation.

Top-ups are available from MMK1,000 up to MMK30,000. Topping-up your SIM card extends your balance validity to a full year from the date of your last top-up.

You need to switch to the “Swe Thahar” tariff by texting “SWE” to 1332 in order to gain access to these bundles. You will receive a 50MB bonus for the subscription. The default data rate is MMK6 per MB. There are daily, nightly and monthly packages available, as follows:

A 5% tax is added to all purchases. You can check your available data by texting “BAL” to 1332.

Tourists visiting Myanmar can buy a visitor-specific SIM card at the MPT Shop at Yangon International Airport. For MMK10,000, you get 1GB of data and MMK5,000 of credit for 10 days. However, this price is way above its other data bundle packages and may be in place to take advantage of travelers as they arrive in a new country.

Ooredoo was the first new network after the military lost control in Myanmar. Its main network is 3G at 900 MHz. There is no 2G backup. It started a 4G/LTE network in 2016. There are lots of outlets for Ooredoo at airports and on many street corners in the major cities. The Ooredoo SIM card starter pack goes for MMK1,500 and comes with a 10MB bonus. At such a low amount of data, top-ups are an instantaneous purchase and are available in sums from MMK500 to MMK50,000.

Ooredoo’s data bundles work on either 3G or 4G and are charged at a rate of MMK6 per MB from 9pm-6am and MMK9 per MB from 6am-9pm. The packages are as follows:

Prices have 5% tax built in. To activate, text the relevant activation code to 4646.

Telenor has the biggest 3G network in the country. It launched its 4G/LTE network in 2016 and as of 2017 it appears in 17 cities. Like its two rivals, Telenor cards are available in the airport and throughout the big cities. The starter price is MMK1,500 without any credit. Top-ups are available from MMK1,000 to MMK10,000. Make a call to any number to activate the SIM card. To access the 3G data network, you must text “SMART” to 500. Data costs MMK8 per MB by default. The following packages are available for 2G and 3G only.

A 5% tax is included already on these rates. Because of the daytime congestion online, two night-time rates are also available under a package called Super Zee Kwat. Data costs MMK1 per MB. These deals, which only function between 11pm and 7am include:

Advice from TripAdvisor about SIM cards in Myanmar

TripAdvisor is well known for its hotel and attraction reviews, but it has forums dedicated just to SIM cards and telco networks as well. Here’s some advice from some recent visitors to Myanmar.

“MPT will not be a good choice. You can easily buy Ooredoo and Telenor in every mobile phone shops. It costs 1500 MMK for a SIM, you can get a micro one too. The best is to buy 2 SIMs if your phone works for 2 SIMs.”

“I used MPT for my mobile while I was there and they were recommended to me by people I was working with in Myanmar as having the best coverage, especially outside of the larger towns.”

“I also used Ooredoo SIM for data on my iPad and my wife had Telenor on her mobile. We didn’t have any problems with any of the ones we used. Most of the people I was working with seemed to be using Ooredoo or Telenor, mainly I think because they spend a lot of time on the Internet and those companies had cheaper data plans than MPT.”

“ Internet on the iPad with Ooredoo was painfully slow at times but that’s pretty much the story with the Internet almost everywhere in Myanmar.”

“Plenty of mobile phone shops where you can buy SIMS or data or just get one at the airport when you land.”

“In Bagan, Mandalay and Yangon all 3 of them will work fine. Honestly I hear the most complaints about Telenor coverage, even within Yangon.”

Myanmar has three SIM card providers battling for customers. Here are some of the positives and negatives about these companies.

An additional question about SIM cards in Myanmar

Q: Is a new 4G network coming to Myanmar?

A: Yes. MyTel is expected to come online in the first quarter of 2018. It’s expected to cover 90% of the population at a deployment cost of US$1.5 billion.