How to buy shares in Norwegian Air Shuttle ASA

Use our graph to track the performance of NWARF stocks over time.

Is Norwegian Air Shuttle ASA under- or over-valued?

The PEG ratio provides a broader view than just the P/E ratio, as it gives more insight into Norwegian Air Shuttle ASA's future profitability. By accounting for growth, it could also help you if you're comparing the share prices of multiple high-growth companies.

We're not expecting Norwegian Air Shuttle ASA to pay a dividend over the next 12 months.

Over the last 12 months, Norwegian Air Shuttle ASA's shares have ranged in value from as little as $0.06 up to $25. A popular way to gauge a stock's volatility is its "beta".

Beta is a measure of a share's volatility in relation to the market. The market (PINK average) beta is 1, while Norwegian Air Shuttle ASA's is 1.1255. This would suggest that Norwegian Air Shuttle ASA's shares are a little bit more volatile than the average for this exchange and represent, relatively-speaking, a slightly higher risk (but potentially also market-beating returns).

Norwegian Air Shuttle ASA, together with its subsidiaries, provides scheduled and charter airline services in Norway and internationally. As of December 31, 2020, the company operated a total of 131 aircraft, whereas 55 owned and 76 leased aircrafts with a route network across Europe into North Africa, the Middle East, North America, South America, and South-East Asia. It is also involved in aircraft financing, leasing, and ownership activities; and cargo activities. The company was founded in 1993 and is headquartered in Fornebu, Norway. . 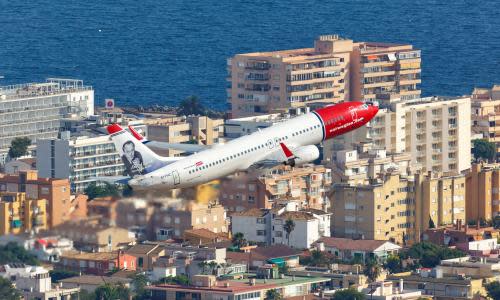