The currency of Ecuador is the United States dollar and cash is king in the "Republic of the Equator".

At the turn of the millennium, Ecuador’s official currency switched over from the Sucre to the United States dollar – the most accessible currency in the world. Here, we look at some of the best credit, travel and debit cards to use on a holiday to Ecuador and South America.

How many Dollars do I need to take to Ecuador?

Less expensive than neighbouring countries Brazil or Colombia, Ecuador is a South American holiday you can do on a budget. Although, there are plenty of five-star options too, especially in Quito. For a quick reference, a beer costs $1.50-$3, and you could probably get away with $15-$30 spending money a day, on a budget.

*Prices are approximate and subject to change

Should you take a travel card, debit card or credit card?

Although Visa and Mastercard travel, debit and credit cards are accepted in larger cities, such as Guayaquil, Quito, Esmeraldas and Manta, a lot of other places don’t have card payment options. As a general rule, always plan to have cash as your first method of payment. Also note that American Express cards are accepted in some places like major hotels and retailers, but using a Visa or MasterCard is a far safer bet.

Travel money options for Ecuador at a glance

*This table is a general summary of the travel money products in the market. Features and benefits can vary between cards.

How each travel money option works in Ecuador

Ecuador uses the US dollar, a currency supported by all travel cards is.sued in the UK. These cards allow you to avoid currency conversion fees and lock in a competitive exchange rate before your trip. Many also come with an additional, emergency card in case the first one is lost or stolen. A travel card can be used to make over-the-counter purchases and ATM withdrawals in Ecuador.

If you’re heading to the coastal towns of Ecuador, you will need to make ATM withdrawals so you can get cash in US dollars. Look for a travel card that doesn’t charge a fee for international ATM withdrawals. Note that the Ecuadorian bank or ATM operator may still charge a fee when you withdraw cash.

Also keep in mind that the currencies of other popular destinations in South America such as Colombia, Brazil, Peru and Argentina can not be loaded on any travel card at present. If Ecuador is just one stop on a bigger trip, you may want to consider one of the other types of travel money products as well.

A debit card can be used to make over-the-counter purchases and cash withdrawals from ATMs. Like credit cards and travel cards, debit card transactions are protected against fraud and unauthorised transactions.

Debit cards are accepted by few merchants in Ecuador. The price of ATM withdrawals should be a significant factor in your comparison if you’re looking to apply for a travel transaction account.

You can use a credit card to pay for flights and online bookings before or during your trip. Major retailers and restaurants in Ecuador also take cards. Credit cards should not be used for ATM withdrawals – In Ecuador or anywhere else for that matter. Cash advance fees and charges can eat up your available credit limit quickly. You can preload a credit card with your own money – something travellers do to avoid the cash advance interest rate (although cash advance fees may still apply). But some credit card features, such as fraud protection, may be void in this instance.

According to the American Express website, there are currently no locations in Ecuador where you can get your traveller’s cheques cashed. You can easily get United States dollars by making ATM withdrawals when you arrive in the country.

Cash is the main payment method used in Ecuador, which means you will need to have US notes and coins on hand to pay for things at most places. If you want to limit the amount of cash you have on hand (i.e. for security), make sure you have one or more cards that you can use to withdraw cash from ATMs throughout your trip. 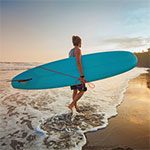 Peter recently backpacked across South America. He visited Colombia and travelled to the south of the continent. He started his trip in Esmeraldas, continued south to Guayaquil, Montanita and finally Quito before travelling to Peru. Peter spent one month in Ecuador in total.

Peter says he didn’t expect to be able to use his debit and credit cards much in Ecuador. Excluding flights and one meal at a nice restaurant, every transaction on his trip was made in cash.

Hotels he stayed at (especially in places such as Esmeraldas, Atacames and Montanita) were also cash only. Meals and drinks and travel between towns and cities all had to be paid for using cash too. Peter says he didn’t spend much time in the urban centres of Quito and Guayaquil, but he expects more businesses are setup to accept card payments in these places.

Peter says he regularly made ATM withdrawals in Ecuador as everything was cash only. He says he withdrew US$300 at a time from whichever ATM machine he could find. The most common ATMs he saw were operated by the Bank of Guayaquil. He used his St.George Visa debit card at these ATMs and both St.George and the ATM operator charged fees. He paid an international ATM withdrawal fee of $5 and a local ATM withdrawal fee of US$1.50 every time.

Do you have any travel money tips?

Buying currency in the UK

There are many ATMs in Ecuadorian cities and key tourist destinations. If you’re concerned about getting a good rate when you exchange currencies, you may want to consider a card that offers free international ATM withdrawals. ATM withdrawals are subject to the Visa and Mastercard international exchange rate, which is often better than what you can get exchanging money in other ways.

South American countries use a range of different currencies. If you’re travelling throughout the continent, exchanging money in Ecuador can be an issue outside the major cities. A bank is your best option. If you’re travelling from Peru, Colombia or Brazil and you have sols, pesos or reals, you can exchange the money to US dollars at some restaurants and hotels. You may not pay a commission on the transaction, but the rate will be much worse than what you can get a bank. Note that it is not very easy to exchange Great British Pounds for US dollars in Ecuador.

Finding cash and ATMs in Ecuador

A guide to deciphering American banknotes – The Greenback

Have you ever found yourself in a country with a wad of foreign cash? It can be all too easy to give a fifty instead of a five. Don’t get ripped off. Familiarise yourself with American banknotes before you leave. In addition to the standard $1 – $100 banknotes, America also has notes to cover larger denominations.

It’s easy to see how much your Great British Pounds will get you, as Ecuador uses the American Dollar. If you are concerned about fluctuating exchange rates while you are away, you can lock in an exchange rate by using a travel money card. You can do the same with travellers cheques, but it is almost impossible to find a place to exchange them for cash in Ecuador.

*Exchange rates are accurate as of 26 September 2017

A combination of cards and cash is the best way to approach any overseas trip. You’ll need cash for most transactions in Ecuador, especially if you’re travelling down the coast. Credit cards are great for big ticket purchases and offer interest free days if you pay the balance in full, while a debit card or travel card is ideal for ATM withdrawals. Whichever combination of products you take with you to Ecuador, be sure to spread your budget across a few different cards and always have some cash for emergencies.
Ecuador’s switch to the US dollar in 2000 has made organising travel money easier for British people. But if Ecuador is just one stop on a South American holiday, think about how you’re going to spend money in other currencies during the rest of your trip. If you have a question about travel money for Ecuador, feel free to get in touch with us by using the form at the bottom of the page.