What is Dash (DASH)?

You’ve probably heard of Bitcoin, the cryptocurrency that’s taken the world by storm. Ever since Bitcoin passed the US$1,000 price mark in January 2017 — a three-year high — general interest in cryptocurrency has skyrocketed.

If you’re wondering what’s behind the incredible growth of this cryptocurrency and how it compares to Bitcoin, you’ve come to the right place.

Like Bitcoin, Dash is a cryptocurrency — or a digital currency exchanged through encrypted software. You might hear it described as an altcoin, which refers to any cryptocurrency other than Bitcoin.

Table: shows partner brands and other brands, sorted by popularity
Ready to buy Dash tokens? Here’s how to get some of the cryptocurrency for yourself.

You have two main ways to buy Dash: trade it with Bitcoin or buy it directly with fiat currency.

Fiat currency is government-issued money like dollars, euros and yen. It’s centralised because it’s printed by the government — as opposed to many digital currencies that are decentralised and distributed by no one.

It’s easiest to buy Dash if you already own Bitcoin. Then it’s just a matter of moving your Bitcoin to a cryptocurrency exchange and trading it for Dash. Kraken, ShapeShift and Bittrex are a few popular exchanges that allow Dash trading. Read our guide on how to buy Bitcoins.

Of the hundreds of cryptocurrencies out there, Dash is one of the most popular. In the fall of 2017, it was the eighth-largest cryptocurrency by market capitalisation. At that time, the 7.5 million Dash in existence were worth US$1.5 billion.

What is market capitalisation?

Market capitalisation is what the entire market for a cryptocurrency is worth. It’s calculated by multiplying a cryptocurrency’s price by the number of coins owned by the general public.

Dash was created in part to address two of Bitcoin’s biggest problems: lack of privacy and speed of transactions. It boasts other advantages that reportedly improve on Bitcoin.

It’s a common misconception that Bitcoin transactions are anonymous. In reality it’s easy to identify a wallet address, and you can trace transactions through the blockchain.
Confused about the blockchain? Read our guide on how it works.
According to Dash developers, you can send anonymous transactions with the cryptocurrency through its PrivateSend feature. With PrivateSend, your transaction is bundled with other anonymous payments. This makes it difficult for someone to see where transactions originate and where they’re going.

In contrast, Bitcoin transactions usually take 10 minutes to an hour for confirmation. 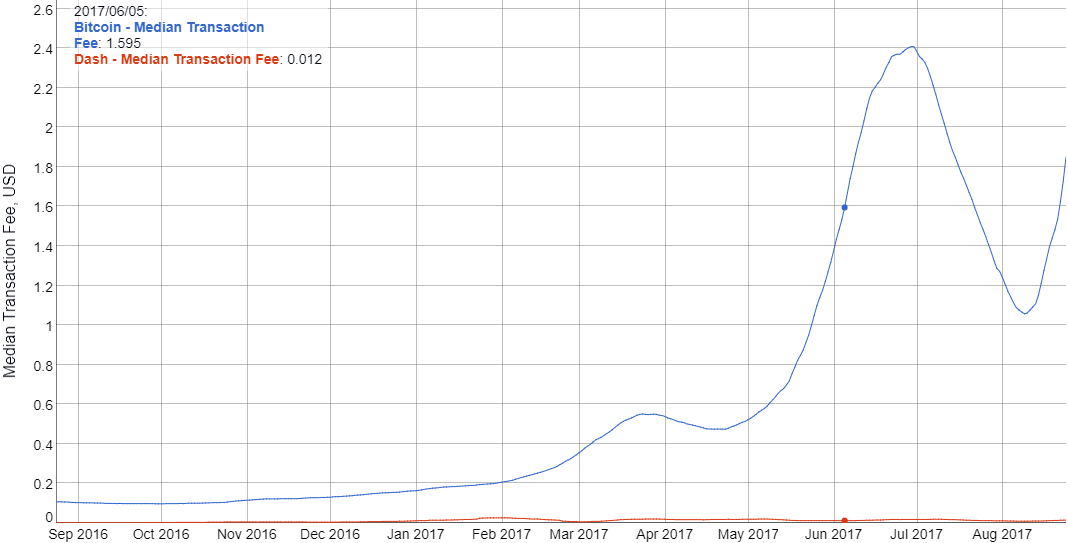 According to the developers, Dash’s governance model is superior to that of Bitcoin. Whereas Bitcoin’s development relies on community contributions, the Dash network is funded by the transaction fees it generates. In the next section, we dive deeper into Dash’s structure.

Dash’s unique structure runs on a two-tier network called the masternode network. According to Dash developers, the network is an “incentivised full-node operation.” There’s a lot to unpack there, so let’s talk about what it means.

The second tier is composed of masternodes. These are full nodes — computers that contain the full blockchain of a cryptocurrency and enforce rules of the network. Masternodes facilitate specialised transactions for PrivateSend and InstantSend. Furthermore, they control the development of the Dash network.

To understand why masternodes are “incentivised,” you should know how someone runs this type of node and what they get out of it.

Miners in a cryptocurrency network are incentivised to confirm transactions through block rewards — coins distributed when a block is solved.

Compare that to the fee distribution of Bitcoin’s block rewards:

At the time of writing, 4,756 masternodes are on the Dash network. In comparison, there are around 9,000 nodes on the Bitcoin network.

Developers often claim premines are useful to incentivise the people who created the source code — and to reward investors. Many observers, however, say premines are unethical and the work of greedy developers.