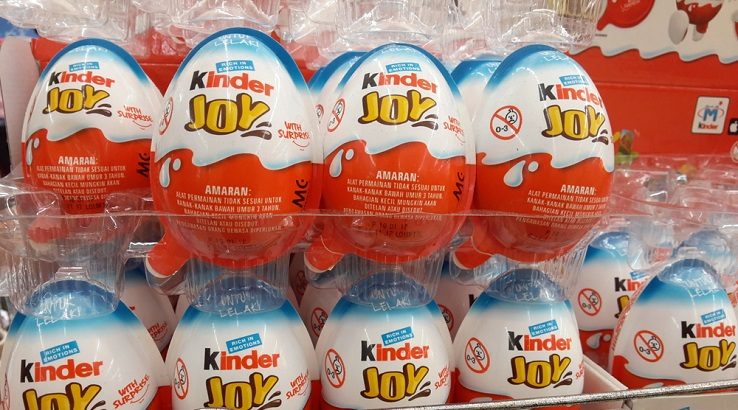 Kinder Joy eggs, containing candy and a toy, are now available in the United States for a little over $1 each.

The popular chocolate eggs, which contain a small collectible toy, will be exclusively available at Walmart for just $1.34 each for 30 days before being released to other retailers and priced a little higher, at $1.59 each.

This will be the first time the surprise eggs, produced by the company that makes Nutella, will be sold in the United States, as other versions were previously banned due to Federal Drug Administration (FDA) regulations.

The FDA doesn’t allow any food with non-edible items to be concealed inside, to avoid choking hazards.

The toy hidden inside the chocolate egg is usually a miniature collectible item, like a bike or animal figurine, and often requires some basic assembly. The joy is in the surprise of not knowing what toy is inside the egg.

The Kinder Joy eggs are different to their Kinder Surprise counterparts available in other countries because they’re sold in an egg-shaped package containing two distinct halves – one with candy, the other with a toy.

Kinder Joy eggs are made with two soft cream layers – sweet milk-cream and cocoa flavor – and feature two round, chocolate-covered wafer bites filled with sweet cocoa cream, to be eaten with the included spoon.

“The delicious, unique taste of Kinder Joy and the variety of toys will delight kids, while mom and dad will be surprised by the high quality of the confection and toys – it’s unlike anything currently on the US market.”