Clearpay or Klarna: What are the differences and which should you use?

Will it be Clearpay or Klarna? Find out what the two services have in common, how they differ and if either of them are really right for you.

Klarna vs Laybuy
Clearpay vs Klarna
Klarna vs Openpay

A group of buy now, pay later (BNPL) platforms have recently burst onto the scene in the UK, but how do you know which one to choose?

To help you narrow it down, this page compares two of the UK’s biggest names in the BNPL sphere – Klarna and Clearpay.

Sister to Aussie brand Afterpay, Clearpay has been making waves in the UK. Aimed at millennial spenders who prefer debit to credit, Clearpay is designed to offer flexible payments without the risk of getting into debt. The company assigns spending limits based on a customer’s previous spending history on the app, and importantly, charges no interest.

Klarna was founded in Sweden in 2005 and is currently the most downloaded BNPL app in the UK. Data from Sensor Tower, explained in Finder’s BNPL report “Instant hit: The rapid rise of buy now, pay later”, showed that the Klarna app had been downloaded 986,000 times between January and July 2020 – that’s 688,000 more downloads than Clearpay’s app in the same time period. Klarna offers three different payment options:

What do the companies have to say?

How did the platforms perform in 2020? This depends on the service you choose. But with most BNPL platforms, you shop online at your favourite retailers and bag items as normal. The only difference comes when you get to checkout. Here, it’s just a case of selecting a BNPL service as your payment option, such as Clearpay or Klarna. Some retailers don’t yet offer BNPL, but most of the big brands do.

When you’ve chosen your service you can select your payment terms. These vary from delaying the payment (by say 30 days) or splitting the payment into as many as six smaller chunks, which can be paid off automatically from your bank account weekly, bi-weekly or monthly.

What if I’m late making a payment?

As soon as you miss a payment, Clearpay will immediately stop you from making any further purchases. You’ll also be charged an initial late fee of £6 and a further fee of £6 if the payment is not made within 7 days. Clearpay’s late fees are capped and will never go higher than 25% of the items you purchased. Whatever happens, Clearpay says this won’t affect your credit score.

With Klarna’s ‘Pay Later’ products, all instalments are interest-free and you will never be charged a late fee, even if you miss a payment. Klarna will automatically try to collect payment for your purchase from the debit or credit card you entered at checkout. If this doesn’t go through on the scheduled due date, Klarna will make one further attempt to automatically collect payment two days later. If this attempt also fails, Klarna will issue you a statement for the full outstanding order amount, which will become payable 15 days later.

Which service is more popular?

The graph below shows Google Trends data for search interest of both Klarna and Clearpay from July 2020 compared to the previous year. As you can see, there’s really not much in it… 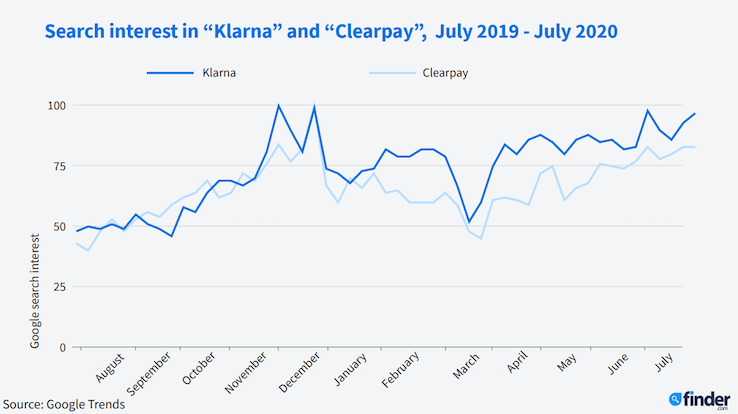 Why use a buy now pay later service?

BNPL has quite a lot going for it, actually. For starters, it can help shoppers manage large, expensive purchases by allowing the amount to be split across multiple instalments. This spreads the cost over multiple paydays, without the added interest that would apply to typical longer-term payment options.

Using a BNPL service is also a useful option if you need to order one item in several sizes. Shopprs can often try before they buy – return the items that aren’t the right size and only pay for what they keep.

Choosing between Klarna and Clearpay comes down to the payment plan that works best for you. If you want a platform that allows you to try on items you’ve bought online before you’re charged for them, Klarna’s “Pay Later” solution is probably your best bet.

For those who are paid weekly, rather than monthly, perhaps Clearpay’s four instalment option is the plan for you, allowing you to spread the cost of your item(s) over a longer time period, compared to Klarna’s three instalment option.

But it’s also worth bearing in mind the platform’s late fees. Clearpay charges a late fee if you miss a payment, whereas Klarna doesn’t at all. Yes, Klarna’s option could be a good way of stopping you from getting into debt, but if you fail to repay your instalments, you probably won’t be able to continue using the service.

Regardless, it’s vital that you only sign up for BNPL services if you’re sure you can repay the money you borrow, and definitely after you’ve read the terms and conditions.

Are you a fan of gaming but feeling the pinch this month? Shop for the latest consoles now and pay later with Klarna.

Looking to buy a new Nintendo Switch? Shop now and pay in manageable instalments with Clearpay.

Find out how buy now pay later service AppToPay works and whether it’s the right choice for you and your next online purchase.

We compare 2 of the UK’s most popular buy now, pay later services, Clearpay and Laybuy, and explore which might be the right choice for you.

Klarna and PayPal are two of the biggest names in the online payment industry. So which should you use for your next purchase? We compare the two.

How do Klarna and Laybuy compare? We put two of the UK’s most popular buy now, pay later services head to head to see how they match up and which might be the right choice for you.

The FCA is set to introduce tighter controls for buy, now pay later firms like Klarna and Clearpay.