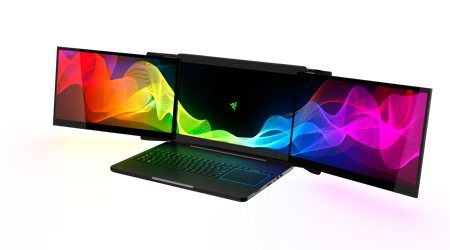 At CES 2017, there is no shortage of gaming gear to pick from, whether your choice is for headphones, gaming mice, keyboards, controllers, or even an app-controlled bicycle that teaches kids their alphabet. No, really, that’s a thing now.

Gaming laptops have also been pushed to the fore, with Lenovo launching its own gaming brand, Samsung pitching a gaming laptop and Dell adding NVIDIA options to its Inspiron line as well as beefing up its Alienware gaming line.

While it’s essentially built on the chassis of existing Razer tech, because it’s a concept, the final specifications of Project Valerie are quite open, depending on what’s state-of-the-art if it goes into final production. Razer is going to seek advice from the gaming community before going into production to ensure that it’s a design and idea that would appeal enough to cover what’s likely to be a fairly significant asking price.
From our demonstration and brief hands-on, it’s certainly something different. It’s definitely going to be more of a luggable PC than a full portable laptop, because we can’t imagine opening up all three screens on a plane or train, or even at most cafes from a pure space viewpoint. Equally, running three screens simultaneously is likely to have a serious effect on overall battery life. Check the full video above for more insights.