No reviews yet. Write a review
Reemul Balla

What can you cook in a Power AirFryer XL Health Fryer?

This is not an air fryer for the experimental foodie, as confirmed by the basic recipe guide that comes with it. It’s more suited to a family or small household who want to make stalwarts like chips, onion rings and fish fingers, and need a machine to heat them up fast from frozen.

The golden basket to cook your chips and wings in is surprisingly spacious. It’s 25cm square with a solid 11cm of depth. You can throw in a standard Sainsbury’s 900g bag of thin fries with space left over. However, the more you put in, the more likely some of the chips in the middle won’t cook. You’ll need a longer cooking time and you’ll want to shake the basket for an even cook.

The basket can take 12 medium-sized wings or 14 standard fish fingers; a 2kg chicken will just about make it, but don’t expect to cram in any potatoes for roasting as well.

With the whole chicken, a disadvantage with the Power compared with other air fryers like the Ninja OP450UK or the Innoteck Kitchen Pro, is that you’ll need to flip it to get an even cook. The outside of the bird could be a blazing brown since it’s closer to the heating element, while the inside could be underdone. So just because something fits in a basket, doesn’t mean it’s meant for it.

For baking, you can fit a 20cm round tray in the basket, or 3 small ramekins for pies.

This air fryer states it can dehydrate fruit and veg for crispy snacks and you’d think it would, with a low temperature setting of 80C. But the timer’s upper limit is an hour, while dehydrating in other fryers we’ve used typically takes at least 6 hours on low heat. So maybe not so easy.

This air fryer is not suitable for liquid dishes. If you want an array of curries and stews, you’re better off with the Ninja Foodi OP350UK or OP450UK, or Instant Pot Duo Crisp.

How big is the Power AirFryer XL Health Fryer?

Most kitchens would be able to handle the Power XL. It’s not very tall at 35cm and the modest width is the same as the height. Its depth is a tad larger than average at 39cm. Other 1-basket models like the Instant Vortex 6 and Breville Halo 5.5 L are a similar size.

This Power is rather heavy at 7.5kg given its relatively small size. The TOWER Xpress Pro Combo T17076 weighs 5.8 kg, but has more than double the capacity of this one. The Power has no handles either, so could be tricky to lift with wet or greasy hands.

Finally, the power cord is a generous 110cm so you won’t be stretching to plug it into a socket.

Is the Power AirFryer XL Health Fryer convenient to use?

It’s easy to clean the Power XL in a dishwasher, but there are some drawbacks with the machine.

Setting the cooking time is a chore as the timer increases only by increments of 1 minute. So if you’re setting a cook time of 30 minutes, you’ll be holding down the + button for what seems like an age. And the buttons make a shrill beeping noise, which can also get annoying.

The air fryer has no pause button. You have to take the basket out of the air fryer for the Power XL to pause, unlike the Philips Essential HD9252/91 or Ninja AF100 which both have pause buttons. And this Power’s basket is not the easiest to push back in. Pausing can be useful if, say, you need to pop out. An aspect we felt was confusing was the 5 claimed functions (air fry, roast and so on). Only the roast and bake icons seem to be visible on the control dial. Grill and sauté are nowhere to be found – they’re not explained in the manual nor apparently displayed on the machine. It seems to be up to you to know what temperature and time to grill something for. So while Power claims this model has 5 functions, it’s not clear how to use all of them.

But for all that, this air fryer has a major plus. It’s an absolute roadrunner when heating up. Preheating is not an issue and if you put a reasonable amount of food in the basket, it will cook much faster than a traditional oven while collecting grease in its lower tray.

Overall, the Power XL has pretty good reviews on Amazon and Currys, but there are a few critical ones, too. Most users are pleased with the speed and the crispiness of their food.

One concern was the uneven cook if you put a lot of food in; another was about the door – some users felt it didn’t close as easily as it should. And that was certainly what we found when we tried it.

Our verdict: Is Power AirFryer XL Health Fryer any good?

As a basic air fryer, the Power XL does the job. It’ll whip up crunchy fries, wings and other freezer staples in no time. Plus it’s big enough for the whole family to get a decent share.

But it lags behind some of its rivals in some key areas. All the stated functions really should be explained, but aren’t. We found the beeping buttons annoying – ditto the fiddly timer.

★★★★★ — Excellent
★★★★★ — Good
★★★★★ — Average
★★★★★ — Subpar
★★★★★ — Poor
We rate air fryers based on the aspects that matter to you. We explain what goes into our scores in our guide to ratings.
The offers compared on this page are chosen from a range of products we can track; we don't cover every product on the market...yet. Unless we've indicated otherwise, products are shown in no particular order or ranking. The terms "best", "top", "cheap" (and variations), aren't product ratings, although we always explain what's great about a product when we highlight it; this is subject to our terms of use. When making a big financial decision, it's wise to consider getting independent financial advice, and always consider your own financial circumstances when comparing products so you get what's right for you.

This Power XL looks rather like an unhatched egg that turns into a whirring space capsule when it starts cooking.

The basket pulls out of the machine easily, but I found it hard to push back in, as it had to be done at the correct angle and with a bit of force.

There’s a piercing beep when you select a preset for a specific food and when it turns off. This is fine if you’ve left it to cook and wandered off to another room, but can be annoying if you’re close by.

The 5-litre capacity is on the low side but the well-shaped basket makes up for this. You can easily cook one component of a dish for a family of 4 or 2 smaller portions using the divider. Plus, it won’t take up too much space in your kitchen.

While it’s rapid to heat up, the Power XL can get ahead of itself – heating up if you’ve taken a brief pause when selecting a preset. This, and the fact that the functions aren’t intuitive to use, brings this space capsule quickly back to earth. 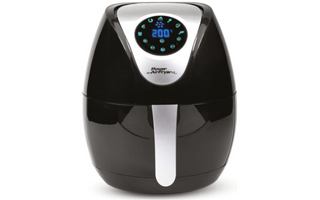