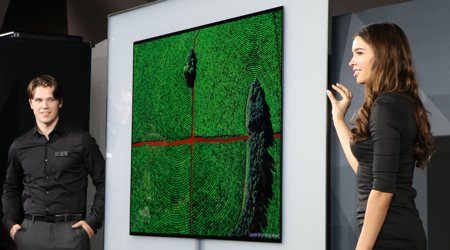 With enough money you could wallpaper your house with LG’s new TVs.

Leading into LG’s press conference at CES 2017, it seemed as though the technology giant had left itself little to really show off, thanks to a series of previous announcements around phones, floating speakers, wearable speakers and Nano Cell UHD TV.

LG is planning to throw Wi-Fi connectivity into all of its home appliance ranges for 2017, not only to simply connect them to the online world, but also to enable them to learn user habits as they go.

The idea is that, for example, robot vacuum cleaners would not only learn where your household obstacles are, but that they’d be able to discern between a chair leg and your leg. For the chair they’d avoid, but for your legs they’d pipe up and ask you to get out of the way. Your washing machine would analyse your water quality, and perform additional rinse cycles if you have hard water, or wash more deeply if you live in a very dusty environment. 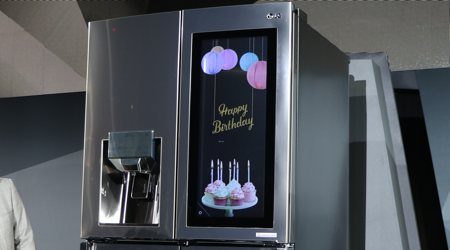 LG also demonstrated a smart fridge with a 27-inch embedded touchscreen, running the same webOS platform as its existing TV range. The fridge uses internal cameras to display its contents, but can also be used as a display board for anniversaries, or for immediate online ordering through Amazon’s Alexa voice assistant. 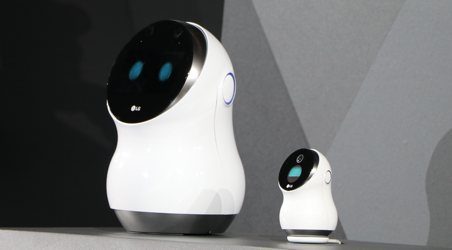 LG had pre-announced that it would demonstrate robot technologies at CES 2017. It demonstrated the Hub Robot, whose design is strongly reminiscent of Wall-E’s EVE robot. It’s designed to manage a range of home automation tasks, as well as playing music and providing alarms and updates for weather or traffic events. Again, though, Amazon’s Alexa forms a key part of its operating setup, and as such we’re not likely to see the Hub Robots this year. 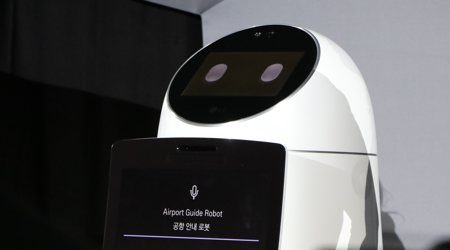 One LG robot you may come across in your travels will be LG’s Airport Guide Robot. It very much does what it says on the tin in this case, because it’s a large moving robot that displays flight information and guidance around international airports to passengers. LG stated that it’s going to install the robots in Seoul’s Incheon International airport. It also announced an Airport Cleaning Robot, which is probably bad news if you’re an airport cleaner. 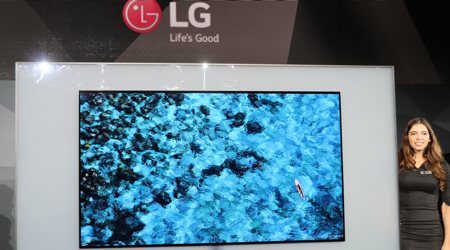 The standout showpiece of LG’s launch was the reveal of the OLED TV W. LG variously claimed that the W stands for “Wallpaper”, “Window” or “Wow”, and that’s not entirely empty hype. As with LG’s other 2017 OLEDs you can expect Nano Cell UHD performance and Dolby Atmos audio built in, but what really makes the W stand out is how little there is of it.

Not in screen size, with the demonstrated model featuring a 77-inch display, but in thickness. The OLED TV W measures in at a scant 2.57mm thick, and mounts onto a wall magnetically. LG calls this “picture on wall”, although that thickness does mean that you don’t plug additional inputs directly into the TV itself, but instead apparently to a breakout box located elsewhere. LG did not reveal pricing for the OLED TV W, but you can expect them to attract premium prices when they launch in the UK.