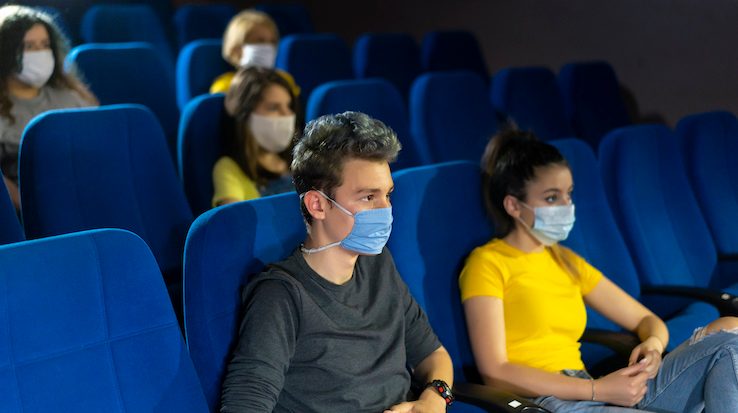 Face covering laws have been extended in England as lockdown easing is put on hold.

The wearing of face coverings will become mandatory in cinemas, museums and places of worship from 8 August, prime minister Boris Johnson has announced.

In a press conference on Friday afternoon, the prime minister revealed the change alongside the postponement of further loosening of restrictions – due to come into effect this weekend – amid concerns over an increase in coronavirus cases.

Johnson said: “We will extend the requirement to wear a face covering to other indoor settings where you are likely to come into contact with people you do not normally meet, such as museums, galleries, cinemas and places of worship.”

The rethink follows new restrictions for people in parts of northern England, after a spike in virus cases was reported by The Office for National Statistics (ONS), with daily cases rising from an estimated 2,800 to 4,200 since last week.

Highlighting these figures, Johnson added: “The prevalence of the virus in the community, in England, is likely to be rising for the first time since May.”

Since 24 July, shoppers in England have been told to wear face coverings in supermarkets and all other shops, with fines of up to £100 for those ignoring the rule.

Face coverings have also been compulsory on public transport in England since 15 June, while Scotland’s first minister Nicola Sturgeon made the use of face coverings mandatory for all shoppers in Scotland on 10 July.

Instead of medical masks used by health and care workers, both the UK government and Sturgeon have stressed the importance of choosing cloth masks made from garments found at home, such as scarves and T-shirts. Finder has published a guide on how to make your own mask.

Mandatory face coverings apply only in Scotland and England for the moment: as devolved nations, Northern Ireland and Wales can set their own guidance. Government officials in both nations have strongly advised people to cover their faces where the two-metre rule cannot be maintained.

In all cases, the public has been warned that for face coverings to be effective, people must wash their hands before putting them on and taking them off and continue to social distance.

Find out all you need to know about face coverings, including breaking news, in our mask hub.