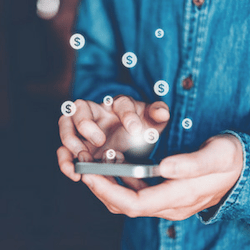 Compare blockchain smartphones, see what they can do and why you’d want one.

At the beginning of 2018 there were no blockchain smartphones on the market. Now you can choose from at least five different phones, each of which is quite different from every other.

But first, why would you even want one? What can blockchain smartphones do that other phones can’t?

Blockchain smartphones at a glance

*Prices are indicative and last updated on 19 March 2019.

What blockchain smartphones can do that other phones can’t

The exact function of a blockchain phone depends on which one you get. But in general, blockchain smartphones offer the following advantages over regular phones.

This is essentially like a secure, offline safe for digital information on your phone. This can hold various types of data and then provide them on a case-by-case basis as needed. So far it’s mostly used to hold cryptocurrency private keys.

However, not all available blockchain wallets have this type of offline storage and different phones will have different degrees of separation between components, which can also add to security. The Sirin Labs Finney is the only one with a separated processor, secure element, display, touchscreen and keyboard.

In the long run there are many applications for this, because the secure element “hardware wallet” part of the phone can hold more than just cryptocurrency private keys.

To this end, some blockchain smartphones will let you securely hold passwords on your phone’s built-in hardware wallet. For now it’s still mostly for cryptocurrency private keys. The benefits of this include:

You can already access dapps on mobile, such as with the MetaMask app for Ethereum dapps, but blockchain phones typically come with this functionality built in.

This is easier, as it’s one less thing to download and safer. The built-in hardware wallet lets you more securely access dapps on the go.

This easier and more secure dapp access also uncovers additional benefits, in line with the practical things cryptocurrency and dapps can do which regular money and apps can’t.

With better dapp access, you could do the following on a blockchain smartphone:

Although these applications are all quite specialised, they’re also things you can do with a blockchain smartphone today. As dapps continue rolling out and the world gradually leans into blockchain, the purposes will grow.

There are a few different tiers for the existing crop of blockchain smartphones, with the Samsung Galaxy S10 standing out as the most powerful one yet, with a relatively appealing price tag compared to others.

The hardware in the HTC Exodus and Sirin Labs Finney isn’t quite so advanced, but they’re both much more “native” to blockchain than the Samsung Galaxy S10, so could have some additional functions to that end.

The Pundi Xphone, with its combination of price and lower-end specs, is more distinctly aimed at crypto enthusiasts and is still much more in the nature of a limited test run than a serious phone with big goals.

The Electroneum M1, meanwhile, is clearly in a league of its own in its own way.

Compare at a glance

Disclosure: At the time of writing the author holds ETH

Was this content helpful to you?
Thank you for your feedback!
David Kleiman, Hal Finney and others helped create Bitcoin, says Dr Craig Wright Plutus review

A beginner’s guide to cryptocurrency ETFs

If you’re looking for ways to gain exposure to Bitcoin and other digital currencies, cryptocurrency ETFs could be worth exploring. Find out what crypto ETFs are and how they work in this introductory guide.

How to stake Ethereum

Learn how to earn ETH coins by locking up ETH with this guide.

How to buy Filecoin (FIL)

How to buy Polkadot (DOT)

Learn more about the DOT cryptocurrency in this beginner’s and buyer’s guide.

How to buy Aave (AAVE)

Learn more about the AAVE cryptocurrency in this beginner’s and buyer’s guide.

Here’s what you need to know about the new Apple iPhone 12, including price, size, storage, release date, model options and more.

How to buy Ren (REN)