40% of American adults will spend less this Christmas.

The coronavirus-induced recession has changed our money habits and not even Christmas is immune. Finder polled 2,001 American adults to reveal a whopping 40% plan to spend less this Christmas. Just how much less? Read on to find out.

One in five American adults plan to spend at least 30% less on average this Christmas. Spending 30% less equates to $318 less for things like gifts, food and travel, with a total forecast spend of $732 based on last year’s average household spend of $1,050.

However, some people are cutting costs more or less than others. If you’re still hoping for an expensive gift or luxurious meal then you might be out of luck if your gift giver or host is one of the 7% who plans to reduce their total spend by over 50%. The good news is that 33% of Americans who do plan to reduce costs only plan to spend 5-30% less, and really it’s the thought that counts.

How much American adults plan to reduce their Christmas spend 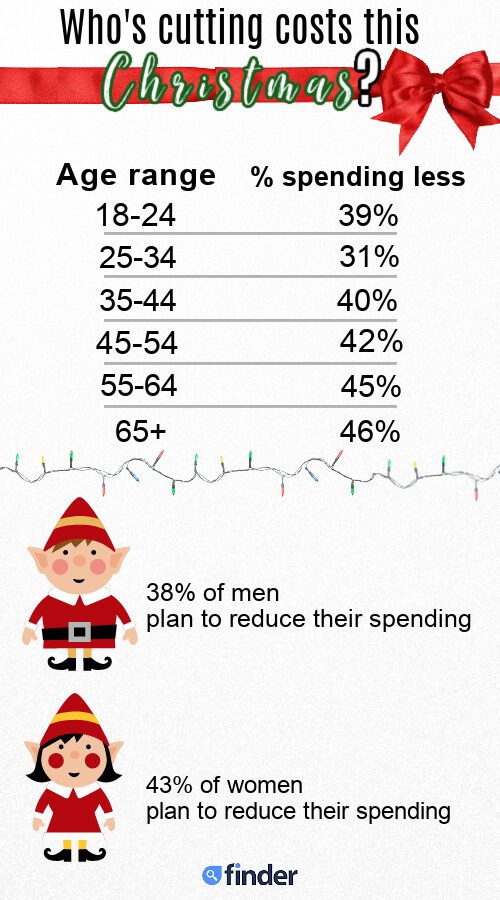 Reduced consumer spending this Christmas will weigh on the economy with our estimates suggesting retailers and service providers could lose more than $12.9 billion, with spending going from $107.2 billion to $94.3 billion.

The US has the third lowest percentage of people planning to cut costs of the 10 countries included in the study, three percentage points lower than its neighbours, Canada. Those in South Africa are most likely to reduce Christmas spend (56%), followed by the Philippines (52%), with Hong Kong and India tied in third (47%). Meanwhile the only countries planning to cut their budgets less this Christmas are Australia (37%) and New Zealand (39%).

Looking to spend less this holiday? We rounded up affordable gifts for everyone on your list

Whether you’re shopping for your BFF, SO or the furry kids in your life, we’ve got a slew of holiday gift ideas that won’t break the bank:

Finder polled 15,451 adults across 10 countries. All countries bar Australia were polled in September via a Google Survey. The sample sizes are as follows: