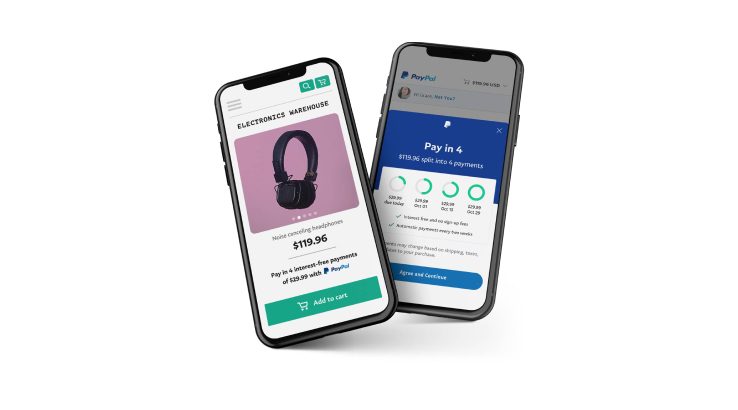 Pay for your online purchases in four installments.

The buy now, pay later industry is about to get a run for its money. PayPal is about to enter the fray with a new feature called “Pay in 4,” which allows shoppers to finance their purchases in four smaller installments. When it officially launches in time for the holiday shopping season, you can use this plan on items priced between $30 and $600, with payments due over the course of six weeks. Navigate your purchases and money owed directly through your PayPal wallet.

Until the launch, PayPal is allowing businesses, e-commerce platforms and shopping marketplaces to pre-register to offer Pay in 4 to customers as soon as it becomes available.

How does this payment plan stack up against similar services like Affirm and Afterpay? We took a closer look.

Pay in 4 vs. other buy now, pay later companies

Will my credit score be affected with Pay in 4?

The new feature may selectively perform soft credit checks, but those won’t affect your credit score, according to MarketWatch’s interview with Doug Bland, vice president of global credit. He added that “Pay in 4″ stands out from other buy now, pay later plans because “a lot of consumers want to avoid paying credit card interest and want to borrow money without a credit check.”

It’s worth noting that Splitit and Afterpay don’t perform a credit check, while Klarna and Affirm do.

It depends. If you don’t want to deal with interest and feel comfortable paying off your purchase over a shorter period, this could be a solid financing option. Should you need more time to make your payments (and feel fine about paying some interest!), then Klarna, Splitit or Affirm might be a better choice thanks to longer, more flexible payment plans.

CDC says Black Friday lines are out, but online sales are already on

Viva First is another new waitlisted app and…

With unemployment on the rise, here’s how to protect your finances

Underwhelmed by Prime Day? Here’s where to get 10 better deals on big-ticket items

Amazon Prime Day isn't the only place for…

Netflix removes US free trials: What are your alternatives?

Instead of a free trial, new users who create…