Driverless cars in the US

We value our editorial independence, basing our comparison results, content and reviews on objective analysis without bias. But we may receive compensation when you click links on our site. Learn more about how we make money from our partners.

For a long time, everyone thought that flying cars were the next big step in automotive technology. After wising up and realizing that the world needs new technology to make driving easier and safer, driverless vehicles entered the conversation.

Road accidents claim millions of lives every year and cause tens of millions of severe injuries, with human error being responsible for about 90% of these accidents. Driverless cars are the most realistic way of solving this problem.

Development of these autonomous cars is well underway, and many of the biggest names in the car and tech worlds are competing for and collaborating on self-driving cars. In just a few short years, driverless cars have gone from being a futuristic dream to an inevitable, and in some ways problematic, reality.

How do self-driving cars work?

A fully autonomous car has to obey road rules, respond quickly to unexpected situations and drive safely in all circumstances. In other words, it has to be better than the average human driver.

This level of accuracy is achieved with built-in systems that constantly analyze the car’s surroundings and automatically take the right action. The exact technologies used in self-driving cars vary between manufacturers, and are often closely guarded secrets, but generally all self-driving cars have three key parts. 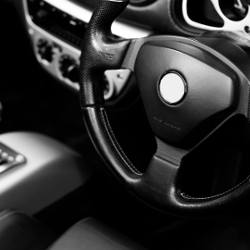 Today’s technology already has this pretty well covered, but there’s still room for improvement. The main reason all driverless cars need GPS is so that you can tell them where you want to go and they can take you there. The technology itself isn’t all that different from GPS phone apps, but having built-in GPS makes it a lot more efficient.

In order to plot where it’s going and be prepared for hazards, self-driving cars need sophisticated detection technology.

To date, most driverless cars have used a combination of LIDAR (light detection used to measure distance), radar and cameras to see obstacles like guardrails, other vehicles, buildings, pedestrians, lane dividers, road markers and even street signs.

The first ever self-driving car fatality was caused by a LIDAR error in a Tesla Model S, when a car on autopilot drove right into a truck that pulled out in front of it. This happened because it was a white truck and an overcast day. The LIDAR misidentified the off-white truck as part of the grey sky, so the car didn’t hit the brakes.

This is because it has to analyze a huge amount of information on the fly, such as the current rotation speed and traction of each wheel, LIDAR and GPS information, engine heat, the constantly updating location of surrounding vehicles and much more.

At the same time, it will be feeding this information through algorithms to determine whether any actions are required, whether surrounding vehicles are likely to change lanes or slow down and anything else.

How safe are driverless cars?

Several companies, including Google, are programming their cars to not take any action, such as changing lanes, accelerating or braking, unless there is a 0% chance of it resulting in an accident. Theoretically, this ensures perfect safety as long as all the sensors and electronics work as intended and nearby human drivers don’t do anything unpredictable.

However, it’s important to keep in mind that this technology is new and the kinks are still being ironed out. There have been accidents involving self-driving cars, including six fatalities, but many of these have come down to driver error. The future of self-driving and driverless cars promises fewer accidents and safer roads, but we’re not quite there yet.

How do Americans feel about self-driving cars?

Americans aren’t quite ready for driverless cars. The feeling is more positive than in the past, but it’s still split. According to a 2017 Pew report about automation, 54% of those surveyed were worried about potential developments in driverless vehicle technology, while 40% were enthusiastic.

Feelings are equally mixed about the benefits and downsides of self-driving cars. 39% of respondents feel driving will be safer with more self-driving cars on the road, but 30% think road safety will actually decrease. 75% of respondents felt that driverless cars will help seniors and disabled drivers be more independent. But 91% expect job losses for driving professions such as ridesharing, trucking and delivery services.

So who’s actually willing to give it a try? 56% of respondents wouldn’t ride in a self-driving car, while 44% would. Those who would skip the ride cited a lack of trust in the technology and safety and a fear of not being in control.

What are the advantages of driverless cars?

A number of positives have been speculated on as self-driving car tech develops.

The biggest and most obvious advantage of self-driving cars is safety. Autonomous vehicles outperform human drivers across the board. They have:

Another clear advantage is efficiency. By itself, an individual driverless car can be more efficient in almost every way, but having the roads full of autonomous vehicles would change everything.

April 2016 saw a successful test of self-driving truck platoons. Six convoys of self-driving trucks left factories all around Europe and drove themselves to Holland. Each convoy consisted of two or three vehicles, all connected by wireless devices, and one lead truck that determined the route and speed of all vehicles in the convoy.

It also showed real efficiency gains. The trucks didn’t need to stop for food or rest, maintained consistent speeds across enormous distances and were able to improve energy efficiency by slipstreaming, or following another vehicle closely.

More freedom for people with disabilities

When cars first hit the market all those years ago, they promised a new type of freedom. Unfortunately this didn’t really help anyone who was blind or otherwise unable to drive due to a disability. Driverless cars bring a whole new promise of freedom, which is more important than it might seem.

What are the disadvantages of driverless cars?

Like most revolutionary technology, driverless vehicles will have a big economic impact that we’re largely unprepared for. One of the best ways to get an idea of what to expect is by looking at certain critical industries. Consider trucking, for example.

Trucking will switch to driverless vehicles as soon as possible

This is because driverless trucks will earn much more and cost less. Driverless trucks don’t need to take breaks, can travel a lot faster, use less fuel and are much safer.

Any trucking company that doesn’t switch to driverless vehicles will be at a huge disadvantage next to its competitors, so most companies will likely be early adopters.

This type of pattern will be seen across many areas. Driverless cars promise much more efficiency and cost-effectiveness than human drivers and any business that doesn’t make the switch will find itself at a competitive disadvantage. This means the mass uptake of driverless vehicles for business purposes could sweep across the world before they ever become similarly popular for personal use.

The downsides will most likely be severe and largely unavoidable, particularly if you work in an affected industry.

Five driverless car problems that still need to be fixed

There are still a few problems that need to be overcome before driverless cars are ready to replace human drivers.

What self-driving car technology can you get in the US?

Fully autonomous vehicles aren’t on the roads yet, but there are many assisted driving technologies already out there. These systems are the stepping stones to driverless tech, and are quite widely available in the US.

The good news is that you can get these features without breaking the bank, and some might even save you money in the long run by preventing accidents and lowering your insurance costs. You might want to consider getting a car with these features if:

If you’re buying a car with financing, these autonomous features are still worth considering, not only as valuable features for your car, but also for how they might help your insurance costs.

Keep in mind that some car loans might require you to take out a full-coverage car insurance policy. Because these cost more, discounts can help you save. Driver-assist technologies that demonstrably lead to safer driving, such as adaptive cruise control, are recognized by some insurers who may reduce your premiums if you buy them.

Newer model vehicles are often cheaper to insure than older ones. This is because spare parts are a lot easier to get and more widely available. Paying more for a newer vehicle with driver assist technology might save you money in the long run.

No one is entirely sure what will happen to car insurance when fully autonomous cars hit the roads in large numbers, but it’s clear that it will need a lot of adjustments.

Roslyn McKenna is an insurance publisher for finder.com, where she's driven to help people get a great deal on car, life, home and other insurance to protect their families and finances. Roslyn earned a Bachelor of Arts in writing and communications from Maryville College and has written professionally for more than a decade on topics ranging from technology and pets to finance and insurance.