Is it illegal to leave a child in the car?

Leaving a kid in the car or trying to break them out could cause you more trouble than you think.

If you live in a state like Louisiana, Maryland or Nebraska, it’s illegal to leave your child unattended in a car for even a minute. But safety laws involving vehicles and kids vary widely in the rest of the country.

There’s no federal law covering when and how long it’s OK to leave your kids in the car without you, although some states have enforced laws regarding leaving your children in the car.

Only 21 US states have passed laws that specifically address kids in unattended vehicles, with another 26 states enforcing less specific “hot car” laws. Some states allow for a grace period of five minutes, and most only apply to children under six years old. A few states allow for a provision if you have a child older than 12-14 who can supervise a younger child.

States with no hot car laws

Not every state has a law on the books about whether it’s illegal to leave children in the car. But that doesn’t mean people haven’t faced criminal charges for leaving a child in the car.

Even if your state doesn’t have a specific law outlining how long a kid can be left alone in a locked car, a court may apply general abuse and neglect laws. Cases in Arkansas and Georgia, states with no hot car laws, have convicted parents of negligent homicide due to accidental hot car deaths.

How many children die in hot cars every year?

An average of 38 children die each year in hot cars, according to noheatstroke.org. And the state with the most deaths? Texas, which isn’t surprising considering its record high summer temperatures over 113 degrees.

Which month has the most deaths?

Most of those deaths occur in July, which has the highest temperatures of any month. August is a close second, especially in states where August temps rival or beat July highs. That’s why it’s most important to make sure kids aren’t left alone in cars during the summer months.

How hot can a car get in the summer?

Good Samaritan laws are designed to encourage people to help their fellow citizens without worrying about the legal consequences of their actions.

In these 23 states, Good Samaritan laws protect you and other bystanders from the damage and liability that result from rescuing someone in distress — like a child in a hot car.

6 tips for keeping kids safe in the car

During hot weather, keeping cool is the name of the game. Use these tips to check on your kids during sunny car rides to make sure they’re safe.

New tech doubles down on kids’ safety in cars

New car technology is constantly improving. Nissan has released a feature called Rear Door Alert in several popular car models. When you turn on this feature, the car detects when you’ve opened a rear door to get in the car. Drivers will see a dashboard alert if the rear door isn’t reopened upon arrival.

Your child’s car seat also could remind you about the precious cargo in the backseat. Evenflow and Cybex car seats offer SensorSafe chest clips that attach to the car’s seatbelts. If the clip’s still attached when you turn your car off, an alert will sound. This sensor pairs with an app, so you can check your car’s backseat from anywhere. 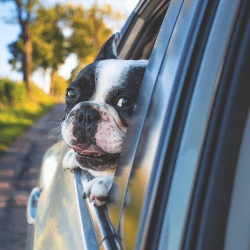 Laws for pets in cars vs. kids in cars

Only a few states make it illegal to leave a pet in a hot car. And if you live in a state where it is illegal, the punishment for leaving your pet in the car is usually minor.

For example, in Alabama, a child at or under age 8 can’t stay in the car if the car’s temperature is 99 degrees or higher. But Alabama doesn’t have official laws about keeping your pet in the car. Keep in mind that laws vary by state, and some like New Jersey keep higher penalties for leaving pets in cars.

You may live in a state that isn’t firm about leaving children in cars while you shop or run errands. But no matter what state you’re in, child abuse or neglect laws could come into play, and a little convenience while picking up milk or dry cleaning may not be worth risking a child’s health or potential legal action.

Compare and save on car insurance

How to calculate the diminished value of your car Does car insurance cover towing?