A closer look at the facts and figures of payday loans

Payday-style loans (or high-cost, short-term credit) are short-term lending for small amounts of money. These loans can be accessed quickly, even by those with bad credit or lower incomes. The tradeoff is that they usually come at a high cost. While 4 in 5 of these loans are usually paid off in one month or less, if we look at the typical interest rates charged, it works out to be 1,300% annualised. Rates vary by payday lender, but compared with most other credit options, this is an expensive way to borrow.

Take a look at the diagram below which illustrates the different types of personal loans and where payday loans fit in:

The latest facts and figures

In January 2015, a cap was introduced on the interest rates that can be charged on payday loans in an effort to regulate them. These are marketed as one-off loans for unexpected expenses. However, due to the accessibility of these loans, it has resulted in people using it for everyday expenses such as groceries, bills and car costs when they are short on cash. About a quarter of payday loans in the UK are rolled over to a new loan term and typically charge £24 a month for every £100 borrowed.

CMA determined the typical characteristics of a payday loan and its borrowers through the analysis of their loans data. Whilst the single most common amount borrowed was £100, the average loan size was £260. 75% of the customers in their data took out more than one loan in a year with the average customer taking out 6 loans in a year. 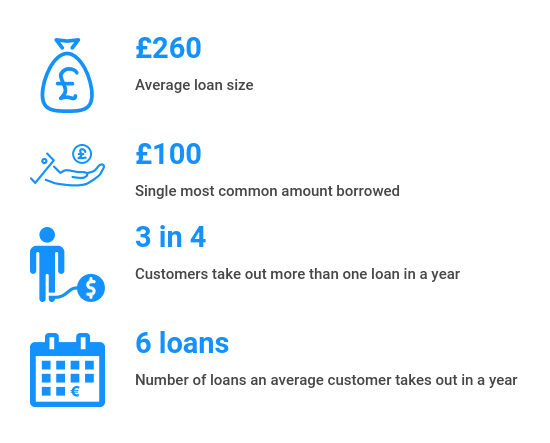 People are more likely to take out a payday loan if they are unmarried, between 25 and 30 years old, living in rented accommodation and on an income of under £1,500 per month. What are payday loans used for?

Even though payday loans were designed as one-off loans for unexpected expenses, the actual result is quite different. An alarming proportion of people have admitted to using payday loans to cover recurring expenses. Over 1 in 2 (53%) borrowers reported “Living expenses such as groceries and utility bills” as their reason for taking out a payday loan. 2% of borrowers confessed to taking out a payday loan in order to pay off another one. Other reasons include car or vehicle expenses (10%) and general shopping such as clothes or household items (7%).

Why do people need payday loans?

Over half of borrowers (52%) said they had to take out a payday loan because they suffered an unexpected increase in expenses or outgoings whilst almost 1 in 5 (19%) said it was due to an unexpected decrease in income. Of those who said their need was due to a shift in financial circumstances, 93% saw this change as temporary. Almost 3 in 5 (59%) said their payday loan was for something that they could not have gone without. Even though almost 1 in 4 (24%) of these people said that they would have gone without the purchase if a payday loan had not been available.

4 years after the interest rate cap was introduced in 2015, how has the payday loan market responded? We take a look at the latest facts and figures of the High Cost Short Term Credit (HCSTC) market to find out.

High Cost Short Term Credit is defined by the Financial Conduct Authority as unsecured loans of up to 12 months with an APR of 100% or more, but does not include overdafts and home credit or bill of sale agreements.

Year to date figures (June 2018) show over 5.4 million of the loans have been taken out, almost half the amount as the peak in 2013 (10 million) before regulatory action was taken. The number of providers has also fallen from over 100 to just 88 in 2018, the most notable provider to leave the market being Wonga in 2018. See the chart below for a more detailed breakdown over the last 2 years for the amount of loans taken out and the number of firms in operation.

Size of the market

Customers borrow in excess of £1.3 billion each year and pay in excess of £2 billion. Explore the chart below to see how much we have been borrowing each quarter since 2016.

Who is taking out Payday Loans?

Payday loans remained a popular borrowing option in 2018, but who is taking them out? The latest figures suggest the younger proportion of the population is still more likely to have taken out a payday loan.

Streaming over Wi-Fi vs. your mobile data Outbound tourism statistics