How to redeem American Airlines miles

Get value for your miles with international business or first class award flights with partner airlines.

Earning miles is easy if you’re an AAdvantage member or own an American Airlines cobranded credit card. But finding the best value for your miles can take some effort.

Often, MileSAAver flights will give you the highest value per mile — especially if you’re traveling abroad. Flying with Oneworld partner airlines on business or first class can give you higher redemption value than flying American Airlines within the US.

Since American Airlines is a member of Oneworld Alliance, AAdvantage miles can be redeemed with all alliance members and with some non-alliance member airlines. Redeem your miles for flights with:

Book your award flight online, by phone or with the American Airlines mobile app.

Choose MileSAAver or AAnytime flights when redeeming AAdvantage miles for an award flight.

The difference between the two is:

Here are the miles required for award flights if you’re flying from a mainland US state: Data obtained February 2019. Values are subject to change and should be used only as a general guide.

Here are the miles required for award Oneworld Alliance partner flights if you’re flying from a mainland US state: 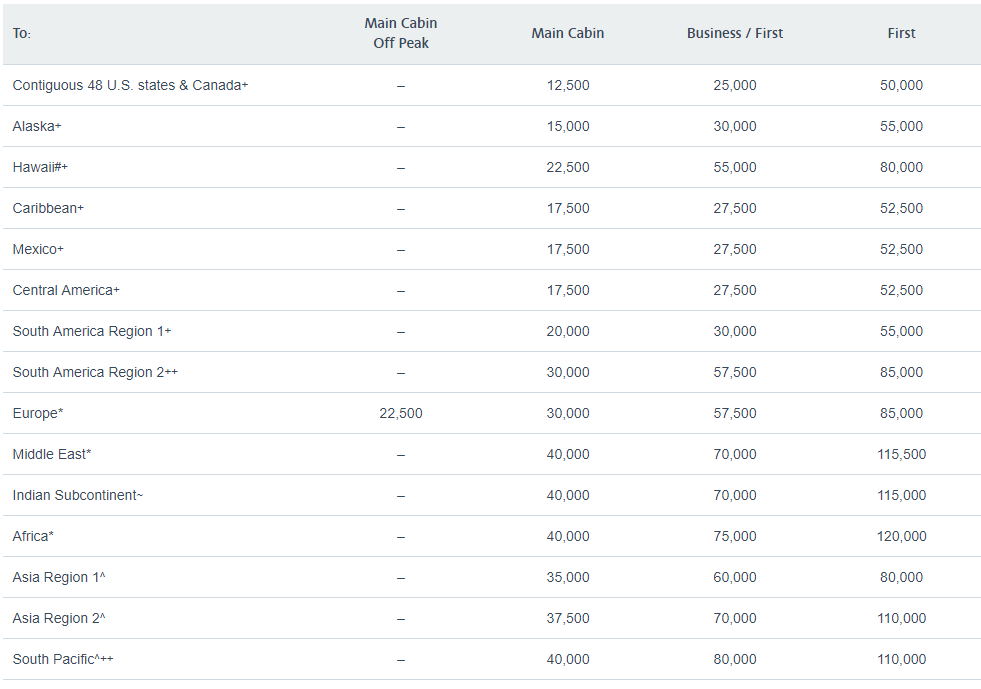 Data obtained February 2019. Values are subject to change and should be used only as a general guide.

Tip: Avoid redeeming award flights for British Airways flights, as they have high fees and taxes on award travel.

How to redeem points for maximum value

Redeem MileSAAver American Airlines flights within the US to maximize your point value in America. The values below are examples of how far your points can get you based on airline websites at the time of writing.

Did you know: You can get better results using the British Airways website

Signup free with the British Airways frequent flyer program (called the Executive Club) to find better international award flights from the US with Oneworld Alliance partners. Use the British Airways website to find seat availability for the best flight and call American Airlines to book your flight with miles.

How much are American Airlines miles worth?

It really depends on what you redeem your miles for. Flights on American Airlines typically cost above 1 cent per mile. As of November 2020, here’s what you can get with 50,000 AAdvantage miles:

Note: You still have to pay taxes and fees when you redeem miles for award flights.

How to earn American Airlines miles

Kliment Dukovski is an investments writer who has written over 600 articles to help readers find and compare the best financial options. Kliment has also written on money transfers, home loans and more. Previously, he ghostwrote guides and articles on foreign exchange, stock market trading and cryptocurrencies.