Lots of functionality wrapped in a small package.

What is Amazon Echo Dot?

About the Amazon Echo Dot 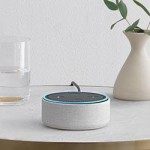 When did the Amazon Echo Dot come out? October 2018

How much does the Amazon Echo Dot cost? $50

While Echo Dot retains all of Echo’s core features, it sacrifices Echo’s large, high-quality audio speaker for a smaller built-in one. So Echo Dot is a fraction of the size, weight and cost of its bigger brother, but at the expense of lower audio quality. But you can connect Echo Dot to external speakers via Bluetooth or a 3.5mm audio cable for an extra boost.

In September 2018, Amazon announced a new version of the Echo Dot speaker that, like most Echo revisions, isn’t much different from the original Echo Dot. Amazon has slightly upgraded the speaker, replacing the old 0.6-inch tweeter with a new 1.6-inch speaker. The 3rd generation model also sports a fabric design instead of the all-plastic look of the original Echo Dot.

What can Amazon Echo Dot do?

Echo Dot can also play tracks from your Pandora, Spotify, iHeartRadio, TuneIn and Amazon Music libraries, as well as stream tracks from Apple Music and Google Play Music via a phone or tablet. Echo Dot can also read audiobooks from your Audible library. But you might want to hook up a set of external speakers if you plan to listen to your tunes in a party setting or at higher volumes.

Hands-free voice calls, on the other hand, work just fine with Echo Dot’s internal speaker. Alexa can only place calls and send messages to someone who also owns an Echo Dot, Echo or uses the Alexa app.

On the upside, you won’t have to pay a cent, no matter how long you talk.

Voice-shopping is another of Echo Dot’s big features. Provided you’re an Amazon Prime member, you can have Alexa order almost anything from Amazon’s digital shelves with a single voice command. However, non-Prime members can only add items to their shopping cart and then use the Amazon website or mobile app to check out later.

Echo Dot’s features aren’t set in stone, either. Thanks to a development platform known as Alexa Skills Kit, anyone can build new functionality into Alexa and release it for download through Amazon. This way, Alexa can be upgraded to recognize new commands, work with the latest smart devices and react more naturally to your requests.

What other devices is Amazon Echo Dot compatible with?

Amazon Echo Dot can act as a command hub for a range of smart-home devices, including TP-Link smart plugs, LIFX LED lights, Honeywell thermostats and Leviton light dimmers. By issuing voice commands to Alexa, you can activate, deactivate and adjust all these devices without getting off the couch.

How to stream Thursday Night Football live in the US

Viewing options for NFL’s Thursday Night Football change in week 5. This is how you can make sure you don’t miss a minute.

Check out the latest deals on musical instruments throughout the Amazon Prime Day event right here.

What to expect from Walmart's Big Save Event

Get ready to shop Walmart's upcoming Big Save Event to rival Amazon Prime Day, offering discounts on everything from cute winter dresses to Roku products.

What to expect from Target's Deal Days sale

Save big on Target products with the upcoming Deal Days sale, featuring discounts on everything from electronics to hot tubs to rival Amazon Prime Day.

Nintendo’s entry into the ninth console generation is the talk of the town, but how does it actually work and what games does it offer?