Whether for work or play, the right slate is out there.

Although the idea for a tablet was proposed back in the 1960s, it wasn’t until Apple introduced the iPad in 2010 that these portable and easy-to-use computers launched to the top of sales charts worldwide. The iPad is a major player still, but plenty of other products are worth considering in this competitive market space.

Data obtained February 2019. Prices are subject to change and should be used only as a general guide.

What is a tablet? 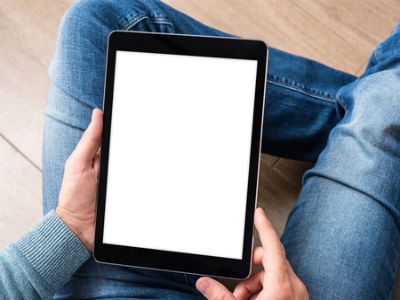 A tablet is a handheld computer that’s larger than a smartphone but smaller than a laptop. These wireless devices feature a touchscreen and a variety of software applications, and they’re designed to be portable, convenient and easy to use.

The first detailed proposal for a notepad-style computer was made by American computer scientist Alan Kay in 1968. His plans for the Dynabook imagined a portable device that weighed about two pounds and gave children easy access to digital media.

The Dynabook never got past the concept stage. But several leading tech companies, including Microsoft, unsuccessfully attempted to launch tablets until the arrival of Apple’s iPad in 2010.

Think of a tablet as device that’s somewhere between your phone and your desktop computer. Like your phone, tablets use mobile operating systems and are built for mobility. But like a desktop PC or laptop, you can also type longer documents, store files and stream videos.

Their touch-sensitive screens allow you to use your finger or a stylus to interact with the information you see. And you can wirelessly connect a keyboard or mouse to the tablet.

Why should I consider a tablet?

You might wonder why you need a tablet when you’ve got a drawer full of tech gadgets at home. But these lightweight devices offer benefits that best your smartphone, laptop and desktop:

Who shouldn’t consider a tablet?

Despite their advantages, tablets might not be for everyone. You could find that you’re able to get with just your phone — after all, you already take it with you everywhere. And newer smartphones with large screens may be enough to overcome the drawbacks of a smaller screen.

Then, you might be one of those who feel that the computing power of a tablet isn’t enough. If so, stick with the bigger screen and larger storage capacity provided by a conventional laptop or PC.

What tablet types are available?

Tablets vary widely in shapes and sizes, but they generally fall into four categories.

How to choose an operating system

You’ll find three main players when it comes to a tablet’s OS.

Apple’s latest operating system, iOS 12, runs on Apple devices only. It’s designed to be clean and intuitive to use. It’s also linked to iTunes and the App Store, which offers more than 2 million apps to choose from.

Google’s Android 9.0 OS runs across several brands of tablets — even Amazon’s Fire OS is based on Android — providing you with ample options when choosing your hardware. It’s relatively easy to use and integrates with Maps, Gmail and other Google apps. It also connects to Google Play’s more than 2 million apps.

Arriving on the tablet scene much later than its two competitors, the Windows 10 operating system is available on Microsoft’s range of Surface Pro tablets and on products from other brands. It offers a computing experience that’s similar to the one you’re used to on your PC.

Your smartphone OS will likely play a role in determining the tablet you choose. For example, if you already use an iPhone, you’re already part of Apple’s ecosystem, which means you may prefer the iPad. You can integrate your iTunes account, Apple chargers and media found on your other devices. It’s a similar story for Android phones and Android tablets.

How to compare tablets

The typical cost of a tablet ranges from $100 to $1,500, depending on brand, model and performance. Aside from the operating system and device type, you’ll want to weigh size, storage and other important factors when choosing a tablet.

Which tablet is best for me?

The best tablet for you depends on what you’ll use it for, the OS you want to use and your budget. Here’s how five popular models compare.

After you have a better idea of the type of tablet you want to buy, weigh the benefits and drawbacks of your options to find a device that’s right for your habits, lifestyle and needs.

Tablets come in a range of sizes and price points. Think about what you’ll use your device for before deciding on a model.

How did we choose these products?

Photo by Jeff Sheldon on Unsplash
Was this content helpful to you?
Thank you for your feedback!