Travel insurance for the Netherlands

Planning an adventure to the Netherlands? Don't forget to pack your travel insurance.

From the thrilling cosmopolitan that is Amsterdam to the rural charm of the far north, the Netherlands is a beautiful country with much to offer. This extremely dense and urbanized nation is one of the most developed in the world and its distinct progressive identity, combined with the fact that most people speak English, makes it an extremely attractive place for many American travelers. Before you leave, pick up a comprehensive travel insurance policy so that you can relax and enjoy your vacation carefree.

Exclusions can also vary from policy to policy, but certain things will almost always lead to a denied claim:

Am I covered if I get high? 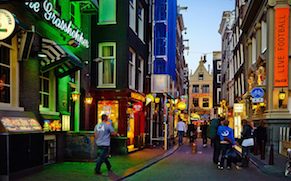 While the Netherlands has a relaxed view on drugs, the same cannot be said for travel insurance brands. Most travel policies won’t cover accidents that occur while you’re drinking or on any drugs not prescribed by a doctor — legal or not.

A balcony high up

Mark, a young backpacker from New Jersey, was enjoying his afternoon on the third floor of his apartment, situated above a famous cannabis cafe in Rotterdam. Earlier that day he had consumed a few menu items from downstairs and was now feeling the effects. Misjudging his balance, Mark slipped off the balcony and broke his leg. Mark’s insurer refused his claim on the ground that he was intoxicated, and he was forced to pay for his own medical treatment, which came to several thousand dollars.

If I participate in escort services in the Red Light District, am I covered? 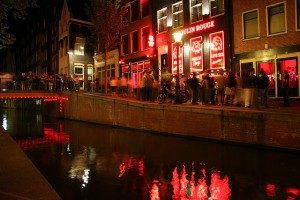 The Netherlands tends to view prostitution in a pretty liberal light, too. Amsterdam’s Red Light District is a classic example, and tourists flock to see prostitutes touting in the famous shop windows.

If a tourist were to do more than look, they could find themselves in the same position as a marijuana tourist. Insurers usually have an exclusion in their policies that states that claims arising from reckless or irresponsible behavior are not covered. This means that if you’re assaulted or have your valuables stolen while consorting with prostitutes, you probably won’t be covered.

Travel risks in the Netherlands

While the Netherlands is generally pretty safe, no destination is without risks. Caution is always your best defense, but a good travel insurance policy can have your back when that’s not enough. Key concerns while you’re in the Netherlands include:

Tony and Anne were on vacation in Amsterdam when they were approached by two men who claimed to be undercover police. The men demanded to inspect their currency for counterfeit bills, but when they handed over their wallets the two men fled, leaving Tony and Anne without any money or ID. Fortunately, they called their insurer’s 24/7 helpline and were able to get their passports replaced and their money reimbursed.

If something goes wrong, how do I file a claim?

If something goes wrong in the Netherlands and you have to claim on your travel insurance, your first step should always be to contact your insurer’s helpline. After that:

The Netherlands is a country full of beauty and excitement. With coverage for medical emergencies, lost belongings and trip cancellations and delays, you can rest easy and enjoy all this beautiful country has to offer.