The financial case for sobriety? Calculate your savings.

Analyzing the habits of the US adult population, a recent Finder survey found that more than half of us — 69.73% in fact — drink at least one alcoholic beverage a week. More surprisingly, about 177.6 million Americans admit to drinking 1.4 billion brews and booze weekly. Gulp!

Other eye-opening findings on our overall imbibing:

How much could you save by avoiding alcohol?

Use the calculator above to see how much you’ll save by abstaining from alcohol .

If you quit drinking, you’ll save …

*Average nationwide prices are based on data published in the journal Alcoholism: Clinical and Experimental Resesarch.

Prior to November 30, 2016, I was just one of the 137 million Americans — specifically, among the 56% of millennials — who relax with a beer, cocktail or spirit at least weekly. But that Wednesday morning was different: The second I opened my eyes and looked up at the ceiling, I knew I wanted to stop drinking.

I chose to give up alcohol for many reasons, and it’s probably those reasons coming together at once that made it an easy decision. All I’d hoped for came true: I had more energy, more mental clarity. I started losing weight and waking up earlier. I felt more optimistic and ambitious about my goals.

I also knew it was going to save me money. I just didn’t realize quite how much.

It’s easy to sink a lot of money into anything when you don’t limit yourself as to how much you spend on it. In general, my husband and I follow a reactionary type of budgeting that I’m sure plenty of people do — after a big month, we’ll just say, “We need to spend less on X next month.”

After two full months of sobriety, I noticed a huge difference in the “rest we spend on ourselves” part of my budget. Instead of breaking even with our usual spending habits before moving on to the next month, I found a couple hundred dollars left in my account with nowhere to be, just twiddling its thumbs. The next month, the same thing. My curiosity effectively piqued, I decided to run a few numbers.

I use the Mint app to track my spending, mainly so I can take note of trends and pinpoint the “we need to spend less on X” stuff. It’s also convenient for searching by transaction type across multiple accounts. And despite a few improvements I could suggest (hit me up, Mint customer experience department), it’s become an essential tool for my personal financial management.

Sorting by Bars and Alcohol, I found that I’d spent $1,757 on alcohol in the past year. We aren’t big bar people and live at the end of a dirt road, so this doesn’t sound like that much to me. But it also wasn’t a full picture of how much we were spending on suds and spirits.

My husband, because he is the best, chose to join me on my sobriety journey. Note that these figures are for a two-person household. Also, I live in California, where there’s at least one full aisle in the grocery store dedicated to liquor, and eating out at restaurants is a two- or three-night-weekly affair. Because line items are not recorded in credit card purchases (yet), I fooled myself into thinking we just ate a lot.

I spent $8,885 on groceries and $3,964 on restaurants in the prior year. So using those same percentages, I found that $2,666 of my grocery budget and $1,665 of my restaurant expenditures were going to alcohol.

I spent almost 12 grand on alcohol in two years. That isn’t even counting cash I spent on beers at sports games or stuffed into my friends’ hands to grab me a drink from the bar at a show. So we’re looking at a very conservative estimate here.

As I mentioned, sobriety has brought me mental clarity — so I won’t even patronize you with I was shocked! or I can’t believe it! I may not have been expecting it to be that much, but I can totally believe it. 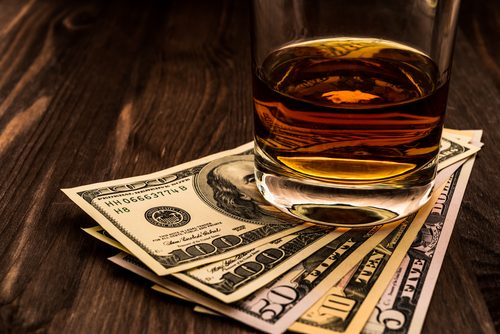 The financial case for sobriety

I occasionally scroll through my Facebook feed and come across budgeting articles. Usually listicles with titles like “Twelve ways married couples can save $5,000 in one year” or “40 ways to make money you have never heard about.” And you bet your ass I click! And then I read things like “take the bus,” “take surveys in your spare time,” “ditch your morning latte.”

I like my commute just fine, I don’t have spare time, and my morning latte is a small comfort that brings me great joy. My listicle is just one item long: Ditch booze.

You could easily take the money you save each month and put it toward old debt, your car loan, or savings. But remember to spend a portion on yourself as a reward for the improvement you’ve made to your health and your wallet. A standing massage appointment, new appliances, or a wardrobe upgrade could do a lot for your overall happiness.

Wanna see how I spent the money we saved? Read all about my $6,500 kitchen renovation.