8 things to consider before moving back in with your parents

While it helped me save, my dating and social life definitely took a hit. 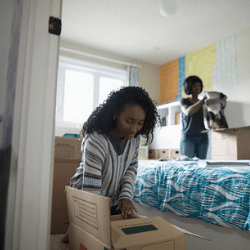 I spent the first seven years of my 20s in college, then graduate school and then working abroad. While I wasn’t technically living with my parents at the time, I still considered their place my home.

And when it came time to move stateside again, I decided to move back into their house — primarily to save some money. While it helped me make a dent in my student loans, my dating and social life definitely took a hit.

4 perks of moving back home as an adult

Moving back home isn’t as taboo for millennials as it might have been for past generations, thanks in part to the Great Recession. And it can come with some big benefits.

You can save on rent, household expenses and food.

The main benefit of moving back home is that you get to save on the cost of living on your own. That can be a huge amount of savings, depending on where you live.

My parents live in New York City, where it’s hard to find a room for less than $1,000 — often without utilities. Throw in food expenses and you’re looking at over $1,500 a month.

I set aside this money in my checking account, which I now regret. I could have earned more and eliminated the desire to spend by opening a high-interest savings account instead.

You can make a dent in your student loans.

Another benefit of those savings? You can use that extra money to pay off your student debt.

When I moved back home, one of the first things I did was increase my monthly repayments. You can also make extra one-time repayments — though contact your servicer first to make sure it’s going toward the loan’s principal.

Paying off your student loans faster can help you save on interest, since there’s less time for it to add up. And getting out of debt faster can make it easier to make other big life moves, like buy a car or home.

You have time to find that dream job.

When you’re facing rent, utilities and other bills, you don’t get to be quite as picky about your source of income. Not having those expenses gives you the time to reflect on what you really want out of your career and say no to jobs that won’t get you there.

I had some savings before I moved home, which I used to support my personal expenses while I took time to rest and then focus full time on job applications. I had the luxury of rejecting employers that didn’t offer the salary, benefits or work environment I was looking for. And when I did get a job, I started work feeling refreshed.

You get to reconnect with your family.

I’d barely seen my parents in the two years before I moved back in with them. Moving home was a bit of a shock at first — I didn’t realize how much we’d changed.

But living with them gave me an opportunity to get to know them as adults. This improved our relationship and allowed us to remain close after I moved out in a way that might have been difficult otherwise.

4 drawbacks of moving back in with your parents

While there’s rarely a financial cost to moving home, that doesn’t mean you won’t pay in other ways. And depending on your friendships, family and other relationships, it might not be worth it.

It can hurt your social life.

Chances are, your parents and friends don’t live in the same neighborhood. My parents lived about an hour and a half away from my closest friends. And it really did some damage to my social life.

I couldn’t say “yes” to last-minute party invitations. I couldn’t just stop by to hang out — or be there right away with ice cream when someone went through a breakup.

That year living at home definitely took a toll on my friendships. And helped me realize living near the people I wanted to spend time with was my top priority when I looked for an apartment of my own.

It can strain your relationship with your parents.

While I ultimately became closer to my parents, it wasn’t easy living with them all the time. It’s easy to feel like a teenager when you’re sleeping in your childhood bedroom — and easy to start acting like one if that’s where your relationship left off.

Depending on your family dynamic, this could make your relationship worse. I have friends who would never move back in with their parents because they have fundamentally different political or religious beliefs that they would have to confront every day. Others have parents who don’t approve of their career choices.

Before you move home, consider your family dynamic and if living there would exacerbate or help you work through the tension points in your relationship.

It can make dating awkward.

While some people have no problem dating a person who lives with their parents, I found it incredibly awkward. I moved in with my parents while I was in a long-term relationship. But when that fell through, I didn’t want to meet anyone new while I was still living with them.

While that stopped me from jumping back into things too quickly, it can also be a little depressing. If you’d rather have a partner and are uncomfortable with the fact that you’re living at your parent’s house, it might not be worth having to put your dating life on hold.

Depending on where you’re from, moving back home can restrict where you’re able to apply for a job. If your city isn’t a major hub for your field, you might have a hard time finding employment.

Remote workers are more common than ever. But some companies might require you to come in for an interview.

Others might not consider applicants who live outside of the city it’s located in. In some cases, you might not be able to save money at all by moving back home.

So is it worth it? It depends on your priorities.

Ultimately, the decision to move back home is a personal one. If your goal is to pay off your student debt faster — and you already have a job — it could be a great opportunity. I also have friends who moved home to meet other goals, like starting their own business. But it might not be worth the strain on your relationships, from your parents to your friends to your significant other.

Anna Serio is a trusted loans expert who's published more than 800 articles on Finder to help Americans strengthen their financial literacy. A former editor of a newspaper in Beirut, Anna writes about personal, student, business and car loans. Today, digital publications like Fundera, Business.com, and ValueWalk feature her professional advice, and she earned an Expert Contributor in Finance badge from review site Best Company in 2020.

How to save for a house Savings account statistics