Tesla Superchargers map: Where you can charge in the US

See the extent of Tesla’s Supercharger network and find out where it can take you.
Analysis by Kenneth Tsang

Have we got the power?

The map below shows where you can find those charging stations across the US as of May 2019, including Tesla’s own Superchargers, patron sites such as hotels and resorts that allow guests to charge up and Airbnb locations with dedicated chargers.

Key facts to know about your Tesla:

The beauty of an electric vehicle like Tesla is that it doesn’t need petrol and hence has low running costs; the drawback is that it needs places to charge.

Fortunately in the US, the Supercharger network is much more advanced than other countries, which Senior Marketing and Communication Manager at Tesla Heath Walker says is due to a few key factors.

“The US has built infrastructure as the population of vehicles have been adopted. In addition, [we] launched the Model S in 2012. This being said, 90% to 95% of charging is done at home, and Superchargers are for long-distance travel.” 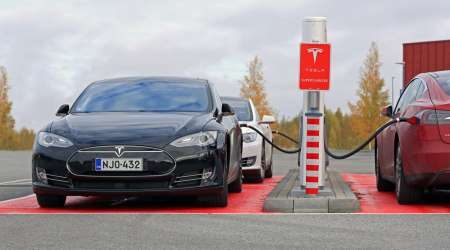 How Tesla is easing range anxiety

As of May 2019, more than 99% of the US population is covered by the Supercharger network. Tesla is hoping this ever-expanding network helps ease range anxiety, or the fear of losing charge and being nowhere near a charger, which was an issue often discussed by Tesla enthusiasts early on.

“Range anxiety was introduced by petrol vehicles. Every time the red light comes on in a vehicle, that is range anxiety. Owning an electric car is like owning a mobile phone, you get home, charge, and wake up with the equivalent of a full tank of petrol every morning. And nobody fills up twice in a day unless driving long distances, which is where Superchargers come into play.”

In fact, Tesla recently unveiled a faster V3 Supercharger that will begin popping up around the US in the next few months. This advanced Supercharger will allow a Model 3 Long Range operating at peak efficiency to recover up to 75 miles of charge in just five minutes — putting charge rates at up to 1,000 miles per hour. According to Tesla, this should help Tesla owners decrease their time spent charging by an average of 50%. And hopefully put an end to range anxiety once and for all.

Elizabeth Barry is Finder's global fintech editor. She has written about finance for over six years and has been featured in a range of publications and media including Seven News, the ABC, Mamamia, Dynamic Business and Financy. Elizabeth has a Bachelor of Communications and a Master of Creative Writing from the University of Technology Sydney. In 2017, she received the Highly Commended award for Best New Journalist at the IT Journalism Awards. Elizabeth's passion is writing about innovations in financial services (which has surprised her more than anyone else).