Americans owe an estimated $184 billion to friends and family annually

Every quarter the Federal Reserve reports on national household debt, and every quarter we’re reminded of the trillions of dollars that Americans owe in credit cards, student loans, mortgages and more. But what about FF debt — or loans from the Bank of Friends and Family?Getting by with a little help from your friends is nothing new, but especially with peer-to-peer lending and digital wallets making lending to people we know easier, we wondered how much do we rely on our loved ones? And how much does it contribute to our national debt?

What we found is that we borrow money for much bigger expenses than to cover lunch (despite what your Venmo feed may say) — to the tune of $184 billion annually. That’s a figure that is more than student loan and credit card debt combined and deserves a closer look.

How did we calculate how much we borrowed from friends and family?

Traditional household debt (i.e. annual mortgage debt, student loan debt, credit card debt etc.) is measured each quarter by how much debt remains rather than how much has been borrowed in total. As a result, we needed to determine how much of this $288 billion remains unpaid to those who lend to friends and family to make our figures fit into the Fed household debt reports. Near half of our takers (49%) claim to have paid back all of their funds. These borrowers are more punctual than the other 51% who haven’t yet made good on their loans, and we found that they averaged borrowing amounts of $2,819.

The 26% who said “Yes, some of it” when asked if they’ve paid back their loan also borrowed above-average amounts of $4,337. These respondents did not specify how much of their loans they’ve paid back. But if we take a middle-of-the-road approach and say that these takers returned half of their average borrowed amounts of $4,337, then those who paid part of their funds back would have returned $55 billion and those who paid in full $121 billion, leaving $112 billion outstanding — and we’re not even considering debts from previous years.

Because we conducted our survey in October 2016, we can compare our results to the findings of the Federal Reserve’s November 2016 Quarterly Report on Housing and Debt. In doing so, we found that our $112 billion in friends-and-family debt surpasses annual changes in mortgages ($90 billion) as well as the combined debt of student loans ($76 billion) and credit cards ($33 billion). In other words, when including FF debt as part of the total Q3 2016 household debt, friends-and-family debt made up 28% of it. Assuming FF debt remained 28% of household debt, we estimated the annual change would have been $184 billion in FF debt had it been reported this past quarter with the rest of the Federal Reserve’s household debt.

While only 16% of baby boomers and 38% of Gen Xers had FF debt, 60% of Gen Y said that they owe their friends and family money.

Given the recent outpourings of different versions of P2P lending and digital wallets, it would make sense if we could gain some additional insight from millennial FF debt. Looking particularly at them, finder.com found some interesting data:

What are friends and family borrowing for?

To further understand this debt landscape, it’s key that we understand the purposes of these FF loans. Regardless of their ages, participants listed utilities and bills (46%) as their top reasons for borrowing, followed by rent (23%) and medical emergencies (17%). Notably, the greater their income, the higher the percentage of respondents who used their FF loans for medical emergencies or to fund starting a business. In comparison to those who made $75,000 to $100,000 a year, those with incomes from $100,000 to $150,000 a year were near three times more likely to borrow money to start a business.** The estimated average amount entrepreneurs borrowed was $7,500, which is more than twice the average amount borrowed ($3,239) for all purposes.

However, the most popular reason for borrowing isn’t necessarily contributing the most to FF debt. If we take into account the average amount of those loans by purpose, we can see where the real economic impact is on friends and family. For example, although only 4% of takers said they used their funds toward a down payment on a home, the average amount borrowed was $16,869,*** resulting in 26% of the estimated $288 billion borrowed.

Who is so generous to lend such large amounts towards a mortgage downpayment? Parents, of course, making up 81% of these givers. Partners and friends also chipped in, both coming in as the second most popular response. And before you assume borrowing from parents because of a mortgage is only a millennial occurrence, GenX were reported at significant rates to have done so as well.

How does debt from friends and family differ from the bank?

Financing the American Dream is an expense that our friends and family carry with our banks. As you can see in our chart above, both reasons No. 1 (new mortgages) and No. 3 (payments on existing mortgages) are in the top three expenditures of FF debt — just as we see in traditional reporting of household debt. Because mortgage related payments plays such a large role in FF debt, perhaps increases in FF debt could signal confidence in the housing market the same way increases in mortgages has been touted lately.

For the 26% of Americans who say they or someone in their household have problems paying or an inability to pay medical bills, the No. 2 reason for FF Debt, medical expenses, should come particularly as no surprise. How much that contributes to credit card and bank loan debt is unclear, but a 2014 CFPB report found individuals with medical debt owe $1,766 on average. No small change. Still, medical debts are often directly owed to hospitals and insurers rather banks. 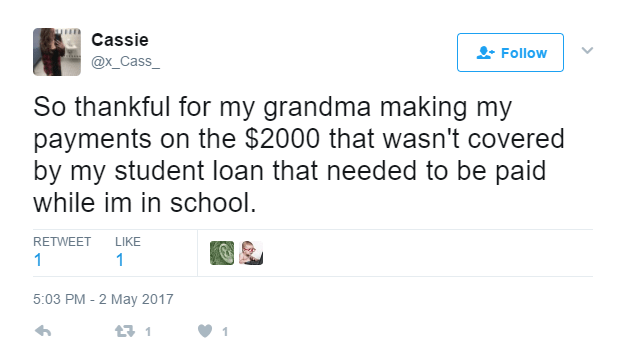 They are notoriously difficult and expensive to collect and can strike families at all economic strata, even more so with those with greater incomes as we saw above. Until we find a healthcare solution from the government that serves all, who you know and how much money they have could continue to determine your ability to get treatment or avoid financial ruin.

What about for the smaller costs? We asked our 2,000 respondents to select from a list the method they’d take if they were short on cash and found friends and family to be the most popular response (49%) further demonstrating our reliance on our personal safety net. Credit cards (43%) and personal loans (24%) followed. Of the takers, those who responded that they would borrow from friends and family jumped to 73%. The remaining 27% of those who’ve borrowed in the past did not list that as a choice in the future, which could imply that it didn’t go well or they’ve maxed out their FF credit. Interestingly, givers were more likely to choose to borrow from friends and family than average. 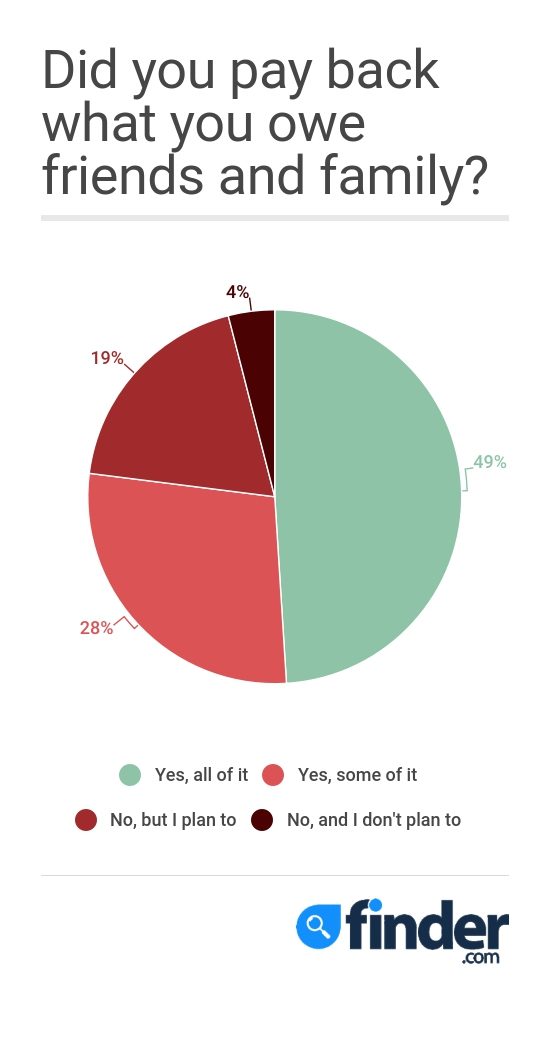 Although 49% of our takers said they paid back their loans in full, there will always be a part of the population that doesn’t pay back the money you’ve lent them. In fact, 4% of takers admitted to not paying back nor having any plans to pay back the loan, which can strain a relationship. Being deemed “delinquent” by a bank is one thing, but being labeled this by friends and family can be another. 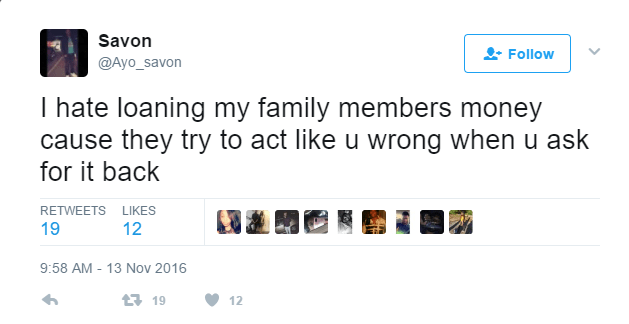 For those who can afford to and qualify, turning to personal loans could be an overlooked option. Today online lenders make getting cash much simpler, since you can compare lenders and apply for loans all from your living room. Depending on your credit score, your interest rate could be lower than getting a credit card. Philip took out a loan through Prosper, an online lending platform, and avoided having to borrow money from friends and family. He instead can enjoy focusing on spending time with them.

“Before Prosper I was juggling multiple credit card payments. Now with the help of a loan through Prosper I am able to get on top of my finances. I make one easy payment every month and I have more flexibility and alot less stress. And I have more money to spend time with my family.” – Phillip W.

Nonetheless, credit cards may be the less complicated solution. Of course, there is always the option of trying to find additional ways to earn money to avoid the need to borrow or pay down your debts faster.

*Note: Because dramatic differences by generation resulted in survey data, data was adjusted to reflect generation results when scaling responses to a national level. This still is not representative of the US population, but we believe is a more accurate representation than without adjustments
**Note: Our sample size for borrowers who have incomes of more than $150,000 wasn’t large enough to include in our results.
***Note: Our respondents selected reasons beyond those listed here as reasons for their loan. However, when we looked at borrowers who listed a down payment on a home as their only reason, the average amount borrowed was higher at $20,373. We took the more conservative estimate as to not over-inflate our figures.

Compare loans to pay business tax debt What is a personal loan?