How to buy Kimberly-Clark Corporation stock in Canada | $131.63

Own Kimberly-Clark Corporation shares in just a few minutes.

How to buy shares in Kimberly-Clark Corporation

Interactive Brokers
Our 'promoted' products are presented as a result of a commercial advertising arrangement or to highlight a particular feature. Promoted products are not a recommendation, an indication a product is the best in its category, nor represent all products in the market. It is important to compare your options and find the right product for you.

Is it a good time to buy Kimberly-Clark Corporation stock?

Since the stock market crash in March caused by coronavirus, Kimberly-Clark Corporation's stock price has had significant negative movement.

If you had bought $1,000 worth of Kimberly-Clark Corporation stocks at the start of February 2020, those stocks would have been worth $781.89 at the bottom of the March crash, and if you held on to them, then as of the last market close they'd be worth $916.14.

Use our graph to track the performance of KMB stocks over time.

Kimberly-Clark Corporation shares at a glance

Is Kimberly-Clark Corporation under- or over-valued?

The PEG ratio provides a broader view than just the P/E ratio, as it gives more insight into Kimberly-Clark Corporation's future profitability. By accounting for growth, it could also help you if you're comparing the share prices of multiple high-growth companies.

The EBITDA is a measure of a Kimberly-Clark Corporation's overall financial performance and is widely used to measure a its profitability.

There are a few different ways that this level of interest in shorting Kimberly-Clark Corporation shares can be evaluated.

Such a low SIR usually points to an optimistic outlook for the share price, with fewer people currently willing to bet against Kimberly-Clark Corporation.

Environmental, social and governance (known as ESG) criteria are a set of three factors used to measure the sustainability and social impact of companies like Kimberly-Clark Corporation.

Socially conscious investors use ESG scores to screen how an investment aligns with their worldview, and Kimberly-Clark Corporation's overall score of 21.73 (as at 01/01/2019) is pretty good – landing it in it in the 27th percentile of companies rated in the same sector.

ESG scores are increasingly used to estimate the level of risk a company like Kimberly-Clark Corporation is exposed to within the areas of "environmental" (carbon footprint, resource use etc.), "social" (health and safety, human rights etc.), and "governance" (anti-corruption, tax transparency etc.).

Kimberly-Clark Corporation's payout ratio would broadly be considered high, and as such this stock could appeal to those looking to generate an income. Bear in mind however that companies should normally also look to re-invest a decent amount of net profits to ensure future growth.

Kimberly-Clark Corporation's most recent dividend payout was on 4 October 2021. The latest dividend was paid out to all shareholders who bought their shares by 9 September 2021 (the "ex-dividend date").

Have Kimberly-Clark Corporation's shares ever split?

Kimberly-Clark Corporation, together with its subsidiaries, manufactures and markets personal care and consumer tissue products worldwide. It operates through three segments: Personal Care, Consumer Tissue, and K-C Professional. The Personal Care segment offers disposable diapers, training and youth pants, swimpants, baby wipes, feminine and incontinence care products, and other related products under the Huggies, Pull-Ups, Little Swimmers, GoodNites, DryNites, Sweety, Kotex, U by Kotex, Intimus, Depend, Plenitud, Softex, Poise, and other brand names. The Consumer Tissue segment provides facial and bathroom tissues, paper towels, napkins, and related products under the Kleenex, Scott, Cottonelle, Viva, Andrex, Scottex, Neve, and other brand names. The K-C Professional segment offers wipers, tissues, towels, apparel, soaps, and sanitizers under the Kleenex, Scott, WypAll, Kimtech, and KleenGuard brands. The company sells household use products directly to supermarkets, mass merchandisers, drugstores, warehouse clubs, variety and department stores, and other retail outlets, as well as through other distributors and e-commerce; and away-from-home use products directly to manufacturing, lodging, office building, food service, and public facilities, as well as through distributors and e-commerce. Kimberly-Clark Corporation was founded in 1872 and is headquartered in Dallas, Texas.

Kimberly-Clark Corporation in the news

15 Dividend Stocks For The FIRE Type And Retired 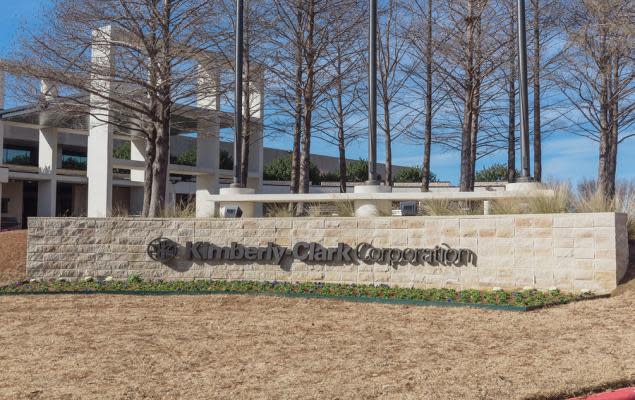