Find out if your credit card will work overseas and learn about possible fees you might face.

Save on fees by taking the right travel credit card on your next trip. Compare low fee travel cards
Chelsey Hurst

Trying to figure out which countries accept your type of credit card and which still primarily work on cash systems can seem overwhelming along with all the other trip planning you have to.

That’s why we’ve created this guide to using a credit card while travelling internationally. We’ve highlighted tips to help you use your card safely, and outlined the credit card fees you could encounter with tips to avoid them. We also included country-specific credit card details for over 30 countries around the world. So no matter where your travels take you, you can enjoy yourself without worrying about how to use your credit safely and cost effectively.

Can I use my credit card in another country? 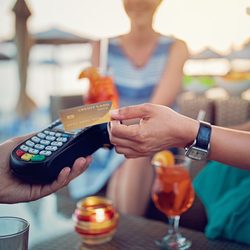 Yes, most countries in the world accept credit cards, at least in major cities. The most widely accepted credit card brands internationally are Visa and Mastercard. Other card brands, like American Express, are generally less accepted by merchants around the world. That’s why it’s always a good idea to carry at least two different credit card brands with you at all times when travelling overseas in case the place you’re visiting doesn’t accept one of your cards. It also doesn’t hurt to have a back-up card in the event one of your cards fails to process or gets compromised.

5 tips to prepare to use your credit card internationally

Before going overseas, make a few preparations to ensure that you can use your credit card with no problems.

1. Get a credit card with no foreign transaction fees

2. Consider getting a Visa or Mastercard

While you may be able to use American Express credit cards at some locations, you’ll find that many merchants won’t accept them. One reason for that is that American Express charges merchants a relatively higher fee than its competitors, so merchants have to pay more our of their pocket to accept Amex cards at their store. That being said, with Amex’s increased popularity around the world, it’s becoming more widely accepted. But since there are still many places in other countries that don’t currently accept Amex cards, you should make sure to carry a Visa or Mastercard credit card with you when travelling as well, just to make sure you’re never stuck if a retailer doesn’t accept your usual Amex card.

3. Give your card provider a heads-up

If your credit card provider notices a foreign transaction on your card, they may put a hold on your account for suspicious activity. To avoid this, give your provider a quick call letting them know where and when you’ll be travelling. That being said, many Canadian financial institutions have developed technology to automatically detect when you’re using your card while travelling, so you no longer are required to let them know ahead of time. Just to be on the safe side though, it’s still a good idea to give them a call before heading out.

If your credit card ends up lost or stolen, you’ll need the right number to call to freeze the card and to get a replacement. Make sure the number is local to your destination or toll free and keep it on you at all times. You can just copy the contact number from the back of your credit card or call your card issuer ahead of time to get the right contact number. Keep it separate from your wallet in case your wallet gets stolen.

5. Know where you’ll get cash once you arrive

Even if you have a credit card, it’s smart to have cash on hand. To save you time and money, plan out beforehand where you’ll be able to safely and easily get your cash from. Use your debit card to withdraw money from an ATM if possible. Although you’ll likely incur an ATM fee each time you withdraw cash, you can avoid the excruciatingly high interest rates that come with getting cash through a cash advance from a credit card.

Compare no foreign transaction fee credit cards to use overseas

The benefits of using a credit card overseas

There can be big advantages to using your credit card while travelling. Some of the benefits include:

5 credit card fees and how to avoid them while travelling

So, should I just use my credit card for everything?

Though a credit card can be convenient, you might not want to solely rely on it when travelling. You’ll also want to avoid using your credit card to withdraw cash from an ATM.

Some merchants at your destination may not even accept credit or debit cards, preferring that you pay in cash instead. This could be the case at a lot of small family-owned shops and restaurants, as well as smaller towns and villages located worldwide. Before departing on your trip, it’s helpful to know whether your destination is credit card friendly.

In conclusion, carry a debit card, a couple of credit cards and some cash when you travel. Your cards will make transactions safer and more convenient, while cash will cover you in situations where plastic won’t.

How to keep you cards safe while travelling internationally

Depending on where you’re travelling, you’ll need to be extra careful when using your credit or debit card. Follow these tips to help keep your finances safe:

Learn more about using a credit card overseas by country

Don’t see the country you’re visiting on this list? Check below for our full guides to the some of the most popular travel destinations around the world.