How to play to earn with Skyweaver

Battle, summon and compete in this fun, free-to-play NFT card game on Ethereum.

Skyweaver is a free-to-play (F2P), web-based card game that blends trading card mechanics and strategy gameplay with the advantages of non-fungible token (NFT) technology. The blockchain game features a player-versus-player (PvP) game mode, which can be played anytime via an Internet browser or mobile device.

Skyweaver allows you to earn collectible cards, which can be accumulated as part of your arsenal or traded on marketplaces like OpenSea or RareBits to make money. You can also build custom decks to launch battles thanks to the cards won from battles. Another option is to buy cards from other players.

Skyweaver is a game designed to be accessible and playable for all types of users with its relatively low skill floor. All of its components are easily understandable and there are tutorials available for newcomers. The development team believes that users can enjoy Skyweaver regardless of previous experience with trading card games (TCGs).

NFT games have, following the early success of CryptoPunks and NBA Top Shot, grabbed the public’s attention due to the additional utility they unlock for owners. The prospect of blockchain technology finally beginning to crack the massive gaming market, which is predicted to be worth a whopping $545 billion by 2028, is driving growth in the sector.

What are NFTs on Skyweaver?

The NFT assets on Skyweaver are simple: they are the cards that you can play, collect and trade. Through the use of NFT technology, you own the cards you hold. Neither Horizon nor the Skyweaver developers can claim or move your assets since you’re the only one who can access them. This also means that you can trade them as you wish with virtually no restrictions.

NFTs on Skyweaver follow Ethereum‘s ERC-1155 standard for both fungible and non-fungible tokens. This type of token standard is slightly more efficient to trade and incurs smaller fees than the default ERC-721 since ERC-1155 allows the creation of various types of NFTs under a single contract. This is important because it reduces the gas costs for using the Ethereum blockchain. To know more about NFTs and how they function, check out Finder’s detailed guide here.

Skyweaver has 3 NFT card grades: base, silver and gold.

Where can I sell Skyweaver cards?

You can sell Skyweaver cards in the game’s own marketplace powered by Niftyswap. Other options are secondary marketplaces such as OpenSea or RareBits. 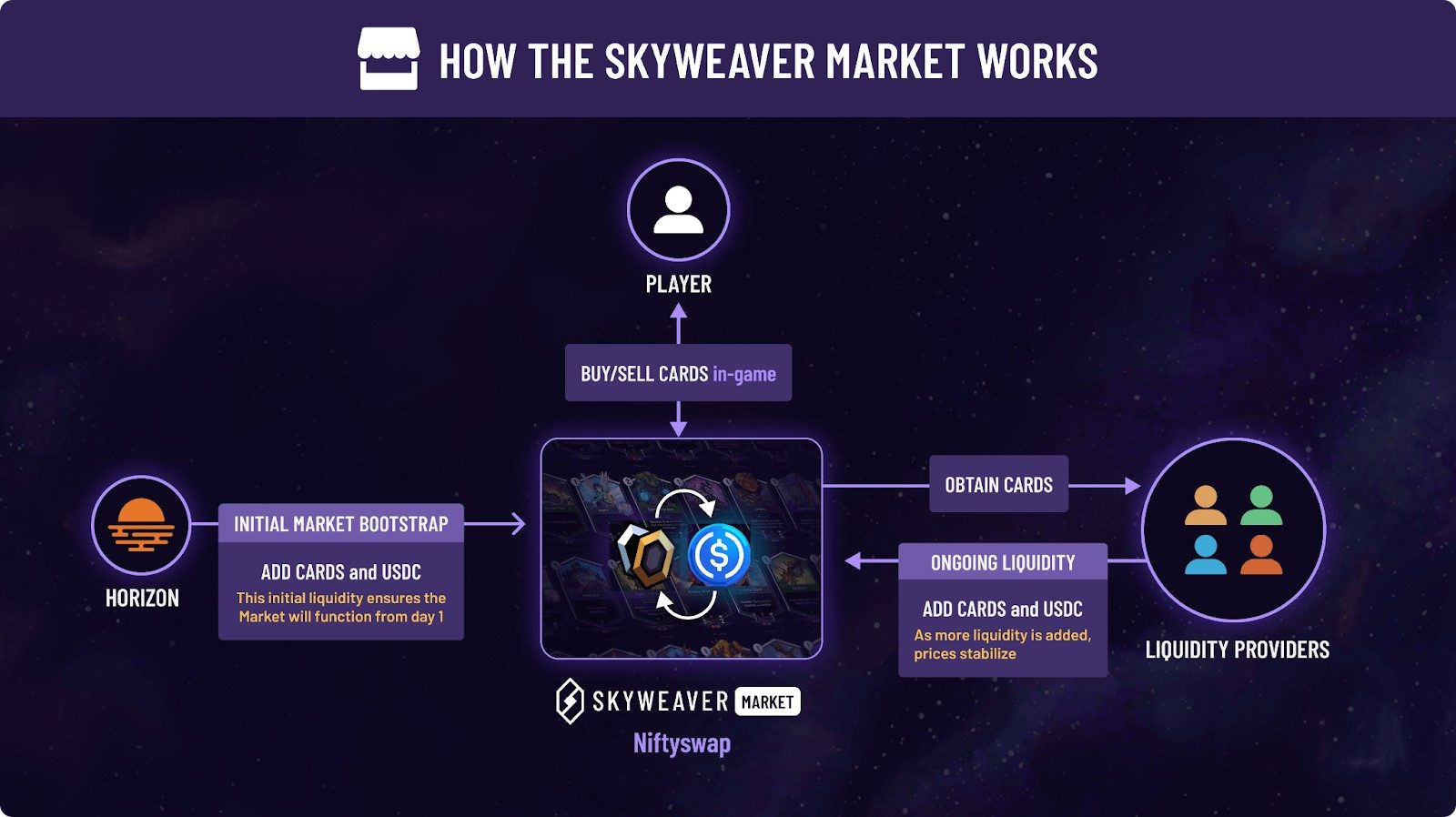 How does play to earn work within Skyweaver?

The Skyweaver game is free to play and crypto can be earned by using base cards as the starting point. However, you need to win weekly ranked rewards or conquest game modes to earn tradable cards, which you can sell to other players to make money.

How to play Skyweaver

Skyweaver is a turn-based card game. As soon as you register, there is an option to choose a hero and then up to 2 prisms for that hero. A prism is a randomly constructed deck that showcases a particular play style. There are 5 prisms:

You can use prisms individually by selecting just 1 or by combining 2 prisms to create a combination deck. This is the discovery game type. There is another game type called constructed where you use custom-built decks from unlocked cards.

Each turn lets you play cards, which perform several functions either against your opponent or to empower your hero. It costs mana to launch any particular card, and the amount of mana varies depending on the card.

Mana is the resource used in order to play cards on Skyweaver. You get 1 more mana per turn and refill all mana at the start of each turn. The second player always starts the game with 1 more mana than the player who goes first. The mana cost of spells can be altered. A green number shows that the cost has been lowered, but a red one shows an increase in cost.

There are 2 kinds of cards that can be played each turn: unit cards and spell cards.

Unit cards let you attack your opponent. Some units have spells attached to them. They can also cost mana but are played similar to how spells are played from a player’s hand. However, if the unit holding them is defeated, the spell is lost. Your hero always begins with the spell Man Vial, which provides bonus mana when cast. A spell card provides a one-off effect to units or heroes, and you can use it to either attack your opponent or enhance your character. The sequence wallet is where you store all the cards that you have earned. This allows you to organize all your cards to collect, gift or trade in the market.

Conquest mode is a win-streak oriented PvP game mode. You enter this mode with only 1 life and get the best reward by winning 3 matches. Once a game is lost, you are eliminated. You can win rare Gold NFT cards in this mode.

Ranked mode lets you battle against other players in order to improve rank on the leaderboard. You can win Silver NFT cards in this mode. You can play with friends through private matches or with bots through practice modes. There are tutorial modes available too, which teach you how to play different types of games and strategies.

Discovery lets you experiment with different heroes and deck builds through a randomized deck of cards provided in each gameplay. Choose up to 2 prisms from the 5 available to generate a deck.

Constructed lets you customize a deck according to play style. You earn cards to customize your deck by playing the game or by buying them.

Infinite Fleet review How to play to earn with Chainmonsters