How the Lightning Network works, what makes it so fast and cheap and what it might mean for cryptocurrency.

The picture below shows some of the test nodes active on the Lightning Network main net at the time of writing on 7 February 2018. You’ll notice that all of the nodes, with the unusual exception of that one called Satoshi’s Vision for some reason, are connected to at least one other node. 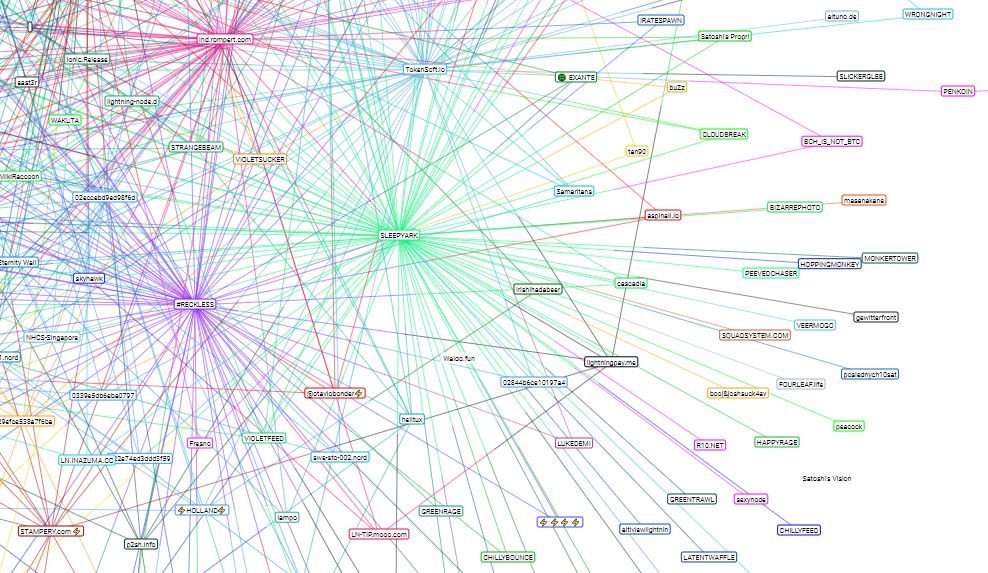 This is because the connections are actually multisignature cryptocurrency wallets. Multisignature wallets are like shared bank accounts, where the contents can be accessed by more than one person. In this case, those people are two connected nodes. Lightning Network smart contracts keep track of how much money in the connection belongs to each party and make sure people can only access their own money.

Transactions can be bounced along between as many nodes as needed, so you don’t need to have a direct connection to send money to someone. This will be facilitated through hubs like those you can see in the picture above.

Bob wants to send money to Jane on the Lightning Network, so he opens a node and connects it to Jane’s node. He puts 0.5BTC into the connection. This information goes on the blockchain as the first snapshot. If it was written in words, the information would say something like “Bob has 0.5BTC and Jane has 0BTC”.

The same information also shows up on the Lightning Network, telling the network who the money belongs to. Right now Bob can access 0.5BTC in the wallet, while Jane cannot access any.

Then Bob sends 0.25BTC to Jane. Instead of going to the trouble of actually moving money around, or sending information to the main bitcoin blockchain, the Lightning Network simply updates to say “Bob has 0.25BTC and Jane has 0.25BTC.”

Other than this, payments can happen at the speed of data and can be completed in a fraction of a second. It doesn’t actually move money, it simply changes who can access the money that’s already there, and how much they can access. In the digital world, this is the exact same thing.

As you might have realized, this means the system needs to be full of money. A connector wallet might not be able to bounce along a transaction if it doesn’t have enough money to pass it through. This is a downfall, but the nature of the network means it might not be as crippling as it sounds.

The main downsides are:

Thirdly, the connections need to be loaded with bitcoin. If you try to send too much money all at once, the system might have trouble finding connector wallets with enough money in them to facilitate your transaction. When this happens, it might hit a dead end. You won’t lose the money, but it might be MIA for a few hours.

This is why the Lightning Network is, by necessity, geared towards small and micro transactions equivalent to just a few dollars or cents. There should easily be enough bitcoin in the network pipes to conduct those kinds of small transactions.

The Lightning Network will still have fees, although they’re expected to be only around a fraction of a percent of the transaction amount. These fees are paid to the other nodes that your transaction travels along, as an incentive for them to keep nodes online and functional (ie loaded with enough bitcoin to pass transactions through).

Users realistically won’t have a connection with everyone they want to pay, and new connections need to be recorded on the blockchain so they can’t really be opened on the go too well. As such, these hubs are most likely going to be an important element of the network.

The non-bitcoin Lightning Networks can probably be topped up with negligible fees, even when using the main blockchain. But to dodge the bitcoin blockchain fees, people might start using intermediaries who have both Litecoin and bitcoin lightning nodes.