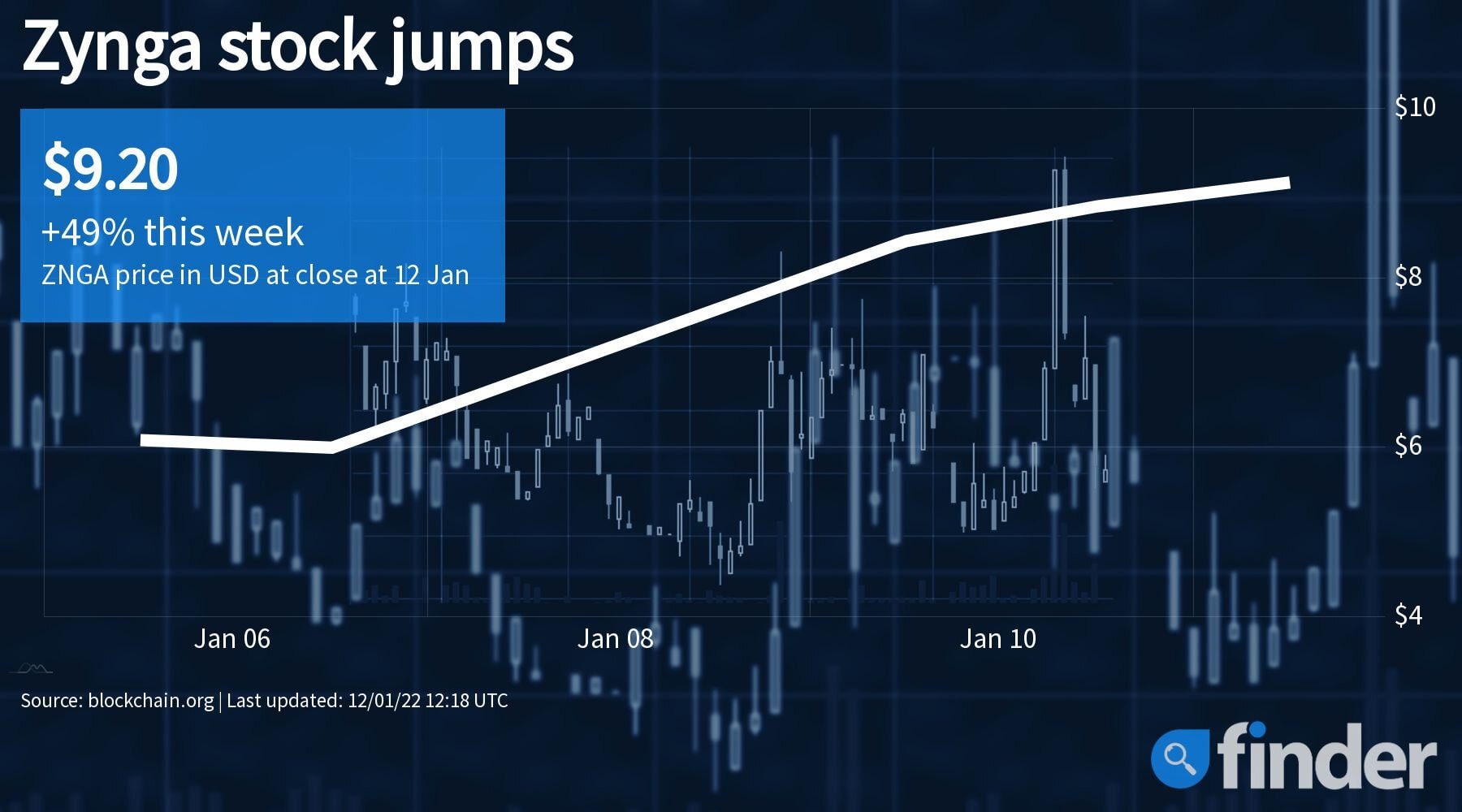 Take-Two looks to expand its mobile portfolio with hits like “Words With Friends” and “FarmVille.”

Shares of Zynga (ZNGA) soared as much as 49% this week on news that it’s been acquired by video game giant Take-Two Interactive Software.
Take-Two Interactive (TTWO) agreed to buy Zynga in a roughly $13 billion cash and stock deal. Under the terms of the agreement, announced Monday, Take-Two Interactive will acquire all the outstanding shares of Zynga in a transaction valued at $9.861 per Zynga share, based on the market close as of January 7. Take-Two, maker of popular series Grand Theft Auto and NBA 2K, will pay $3.50 in cash and $6.36 in Take-Two common stock for each Zynga share, the companies said. The video game giant looks to expand its mobile portfolio with hits like Words With Friends and FarmVille.
The transaction is expected to close in the first half of 2022.
“We are thrilled to announce our transformative transaction with Zynga, which significantly diversifies our business and establishes our leadership position in mobile, the fastest-growing segment of the interactive entertainment industry,” Take-Two Chairman and CEO Strauss Zelnick said. “This strategic combination brings together our best-in-class console and PC franchises, with a market-leading, diversified mobile publishing platform with a rich history of innovation and creativity.”
Zelnick added, “As we combine our complementary businesses and operate at a much larger scale, we believe that we will deliver significant value to both sets of stockholders, including $100 million of annual cost synergies within the first two years post-closing and at least $500 million of annual Net Bookings opportunities over time.” Shares of Zynga closed Monday at $8.44, up 41% for the day, and were trading a bit higher by Tuesday. Take-Two’s stock, in contrast, fell more than 13% on the announcement.

A good deal for investors?

For investors who owned Zynga before the move, the deal represented a profitable premium. But the stock is now approaching the deal price. When the transaction closes, shareholders will receive $3.50 in cash and $6.361 in shares of Take-Two common stock for each share of Zynga stock, valued at $9.861 per Zynga share. If you’re looking to cash in on the deal, keep an eye on the stock to see if it pulls back from its current price, or you’ll be waiting for a smaller gain at the current price.

Zynga is a social and mobile game developer founded in 2007 and headquartered in San Francisco, California. The company’s first game was a social poker game. Today, Zynga is one of the largest developers of mobile games. Zynga went public in December 2011, joining the Nasdaq under the ticker symbol ZNGA. The stock rose 67% to a high of $14.69 in the three months following the company’s IPO before plummeting 87% to a low of $2.14 per share nearly a year after its debut on the market. Over the last few years, Zynga has seen a steady increase in revenue, which, for a long time, translated into a rising stock price. Since 2018, the company has reported at least 46% year-over-year revenue growth. Shares of Zynga achieved a 52-week high of $12.32 in February 2021 following a strong 2020 earnings report. The company reported record revenue and bookings performances, with revenue of $1.97 billion, up 49% year-over-year, and bookings of $2.27 billion, up 45% year-over-year. Still, shares had slumped to about $6 before the deal announcement.
The stock is currently trading at around 28% below its 52-week high.

What is Take-Two Interactive?

How has its stock performed?

Take-Two stock went public back in 1997 but has seen the majority of its growth over the last decade, rising 900% since 2012.
The company has a market cap of around $17.1 billion.
Is this Take-Two stock worth a buy?
Coming off a strong second quarter of its fiscal year 2022, Take-Two raised its outlook for the fiscal year 2022, ending March 31, 2022. The company expects net revenue for the year to be between $3.35 and $3.45 billion.
The stock hit an all-time high of $214.91 in February 2021 but has since pulled back. Take-Two’s stock now trades down roughly 35% from the 52-week it hit last February.
Take-Two stock is currently rated a Buy by analysts with a 12-month price target of $214.54 — a 45% premium over its current price. At the time of publication, Matt Miczulski did not own shares of any equity mentioned in this story.