Learn how to easily invest in Activision Blizzard shares.

Activision Blizzard Inc (ATVI) is a leading electronic gaming & multimedia business based in the US. It opened the day at USD$63.75 after a previous close of USD$62.67. During the day the price has varied from a low of USD$62.17 to a high of USD$64.08. The latest price was USD$62.38 (25 minute delay). Activision Blizzard is listed on the NASDAQ and employs 9,500 staff. All prices are listed in US Dollars.

Prime XBT
Our 'promoted' products are presented as a result of a commercial advertising arrangement or to highlight a particular feature. Promoted products are not a recommendation, an indication a product is the best in its category, nor represent all products in the market. It is important to compare your options and find the right product for you.

How to buy shares in Activision Blizzard

Since the stock market crash in March caused by coronavirus, Activision Blizzard's stock price has had significant negative movement.

If you had bought $1,000 worth of Activision Blizzard stocks at the start of February 2020, those stocks would have been worth $970.15 at the bottom of the March crash, and if you held on to them, then as of the last market close they'd be worth $985.44.

Is Activision Blizzard under- or over-valued?

Valuing Activision Blizzard stock is incredibly difficult, and any metric has to be viewed as part of a bigger picture of Activision Blizzard's overall performance. However, analysts commonly use some key metrics to help gauge the value of a stock.

Socially conscious investors use ESG scores to screen how an investment aligns with their worldview, and Activision Blizzard's overall score of 21.84 (as at 12/31/2018) is excellent – landing it in it in the 17th percentile of companies rated in the same sector.

Recently Activision Blizzard has paid out, on average, around 12.73% of net profits as dividends. That has enabled analysts to estimate a "forward annual dividend yield" of 0.82% of the current stock value. This means that over a year, based on recent payouts (which are sadly no guarantee of future payouts), Activision Blizzard shareholders could enjoy a 0.82% return on their shares, in the form of dividend payments. In Activision Blizzard's case, that would currently equate to about $0.47 per share.

Activision Blizzard's most recent dividend payout was on 5 May 2021. The latest dividend was paid out to all shareholders who bought their shares by 13 April 2021 (the "ex-dividend date").

Activision Blizzard, Inc. , together with its subsidiaries, develops and publishes interactive entertainment content and services in the Americas, Europe, the Middle East, Africa, and the Asia Pacific. The company operates through three segments: Activision Publishing, Inc. ; Blizzard Entertainment, Inc. ; and King Digital Entertainment. It develops and distributes content and services on video game consoles, personal computers, and mobile devices, including subscription, full-game, and in-game sales, as well as by licensing software to third-party or related-party companies that distribute Activision and Blizzard products. The company also maintains a proprietary online gaming service, Battle.

Activision Blizzard: Stay On the Sidelines for Now 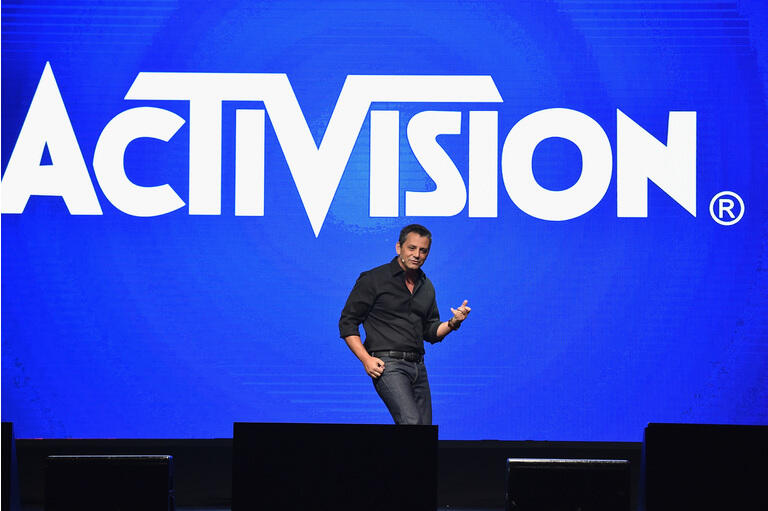 Activision Blizzard Is Cheaper Now, But Understand This First

Disclaimer: This information should not be interpreted as an endorsement of futures, stocks, ETFs, CFDs, options or any specific provider, service or offering. It should not be relied upon as investment advice or construed as providing recommendations of any kind. Futures, stocks, ETFs and options trading involves substantial risk of loss and therefore are not appropriate for all investors. Trading CFDs and forex on leverage comes with a higher risk of losing money rapidly. Past performance is not an indication of future results. Consider your own circumstances, and obtain your own advice, before making any trades.
Was this content helpful to you?
Thank you for your feedback!
How to buy IBM (IBM) shares How to buy eBay (EBAY) shares