Where to find the purple Stranger Things sweatshirt for Black Friday 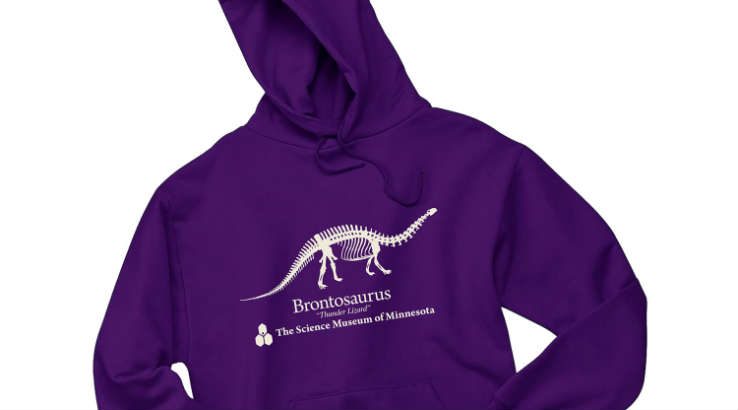 A vintage 1980s sweatshirt depicting a brontosaurus skeleton is one of the hottest Black Friday items.

A purple sweatshirt from the Science Museum of Minnesota has skyrocketed in popularity after being featured on the Netflix original show Stranger Things. You can pick it up online this weekend and receive 10% off.

The dinosaur hoodie was worn by the show’s character Dustin Henderson, portrayed by 15-year-old actor Gaten Matarazzo, during the first episode of the second season, which premiered on October 27 this year.

The purple sweatshirt depicts the skeleton of a Brontosaurus with words “Thunder Lizard” and “The Science Museum of Minnesota”. It was first spotted by one of the American museum’s social media followers.

The pullover made a brief appearance in the Explore Store of the Science Museum of Minnesota more than 30 years ago. However, its sudden reappearance on the Netflix hit series caused fans to inundate the St. Paul non-profit organization with calls, posts and requests to purchase the throwback sweatshirt.

The museum says the overwhelming response by fans of the show has been just as strange and unexpected as the experiences that confront the character who wore the “Thunder Lizard” sweatshirt on the show.

“The museum has been flooded with phone calls, emails and social media posts from fans who are anxious to get their hands on the vintage sweatshirt,” the Science Museum of Minnesota said in a statement.

The hoodie was re-released by the museum on November 7 and generated $400,000 in sales in just a few hours.

The Science Museum of Minnesota’s physical store and website currently stock the purple hoodies, along with T-shirts and crewnecks, in adult and children’s sizes, costing between $15 to $40 each.

Explore Store orders have been restricted due to demand. However, on Black Friday and through the weekend until Sunday November 26, the museum is offering 10% off all online orders using the coupon code THANKS10.

Orders are thundering in for Brontosaurus apparel. Due to demand, our website is slow. We have an unlimited supply online – be patient!

Picture: The Science Museum of Minnesota