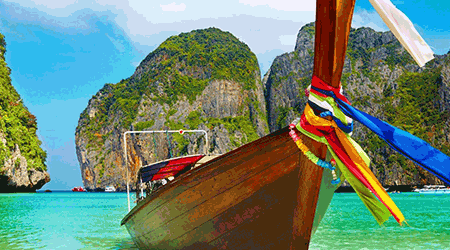 The interest we’re paying on the $12.64 billion borrowed for holidays can sting beyond any sunburn. A survey commissioned by finder.com and conducted by global researcher provider Pureprofile found that almost a quarter of Americans (23.2%) who say they’ve borrowed money in the past year did so to pay for a vacation. The seduction of palm trees and a relaxing oasis might make us forget that most loans are sealed with interest, potentially leaving crippling debt-lag on top of that jetlag.

With 19.1% of Americans having taken out a loan, that’s roughly 10.91 million adults who’ve put a hand out for a holiday.

Our research also reveals the average amount we’re borrowing for our getaways: a whopping $1,159, totaling some $12.64 billion among us. That’s not counting the interest banks and other lenders are charging us for the convenience.

We further crunched the numbers among the average rates and terms that come with popular loan types, finding that Americans collectively accrued $778.77 million in interest across them to pay for vacations in the previous 12 months.

Finder set out to unpack the true cost of taking on a loan for vacation, discovering which of the ways we’re most likely to borrow through results in the highest interest.

How do Americans borrow for vacation?

According to our research, the No. 1 method for borrowing money to fund a vacation is the convenient credit card. Nearly half of those surveyed (46%) say they used this method over personal and other loans.

In second place were loved ones, with 35.7% of Americans asking family and friends to fund their vacation, followed by personal loans (12.7%), short-term payday loans (4.8%) and peer-to-peer lending (0.8%).

How much do each of these methods end up costing us?

The majority of loans are a costly convenience. To find out how much interest Americans pay on top of the average $1,159 borrowed, we compared the vital stats of popular loan types.

We considered the average interest rate for each loan’s industry, assuming that borrowers would pay back their loan’s interest and principal over the course of a distinct repayment period. We determined this repayment period by averaging industry data from our research for each type of borrowing method.

Those who paid for vacation with a credit card ended up paying an average $115.23 in interest, assuming an industry average 18.62% APR calculated over 13 months, the average repayment period for credit card balances.

Likewise for personal loans: Americans ended up paying an average $121.22 in interest, despite a lower 10.57% APR and higher 24-month repayment period typical of personal loans.

Less popular peer-to-peer lending resulted in $311.19 paid on top of our principal, calculated over an average 38-month repayment period at 18.01% APR.

What are Americans paying in debt-lag overall?

Interest totals by method don’t provide a complete picture of just how much Americans pay to borrow. It turns out that Americans are paying a hefty $778.77 million in interest alone. That’s the result of multiplying the number of people for each method with the average interest paid per person.

Breaking down this $778.77 in interest, we see the largest chunk comes from credit cards. Plastic represents about $578.1 million (74%) of the pie, followed by personal loans which are about $167.88 million (22%). Peer-to-peer lending makes up only about 3.49%, with short-term payday loans contributing less than 1%.

Of course, if you borrow from family and friends, chances are that you’ll avoid interest altogether.

With several options to consider for vacation financing, you may want to first determine if paying interest is worth the relaxing time away from responsibilities.