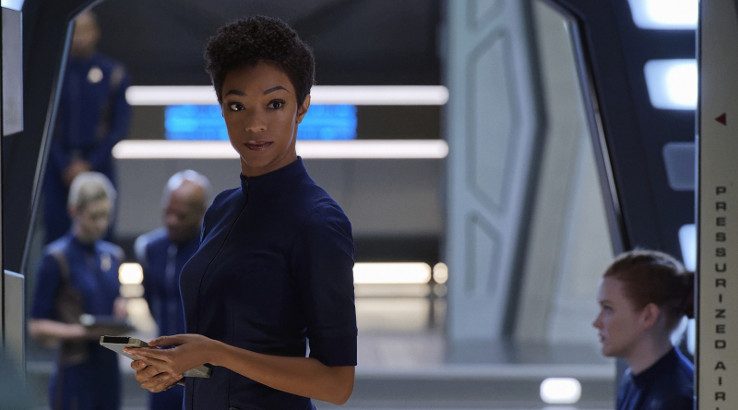 Well, pack a picnic basket with pok tar and a thermos of plomeek tea, because it’s Vulcan road trip time! More specifically: Ambassador Sarek, accompanied by Adjunct V’Latak, are en route to the Cancri system for a secret meeting with two independent Klingon houses. Sarek’s plan is to get there and sue for peace. V’Latak, being an undercover anti-human extremist, has a daily planner entry that reads: suicide-bomb Sarek, but not before monologuing just long enough for him to escape the kill zone. Highly illogical, folks.

On the Discovery, Sarek’s adopted daughter, Michael Burnham, is whipping Cadet Tilly into shape. Essentially, this space-crossfitter suggests a physical commendation could be one important step on the road to Tilly earning a captaincy, possibly to a Constitution-class vessel like the Enterprise (awesome original series mention #1!). Green tea and nutrient-filled burritos are also prescribed, but it’s clear that Tilly is hungry for Lieutenant Ash Tyler instead. This dashing rescuee is now in the good graces of Captain Lorca, thanks to a hologram deathmatch where Tyler impressed his superior with 360 no-scope Klingon kills, and more importantly, he didn’t brag about his post-match kill-death ratio. Understandably, Lorca recognises he’s not only an awesome co-op companion but also the perfect fit for Chief of Security. 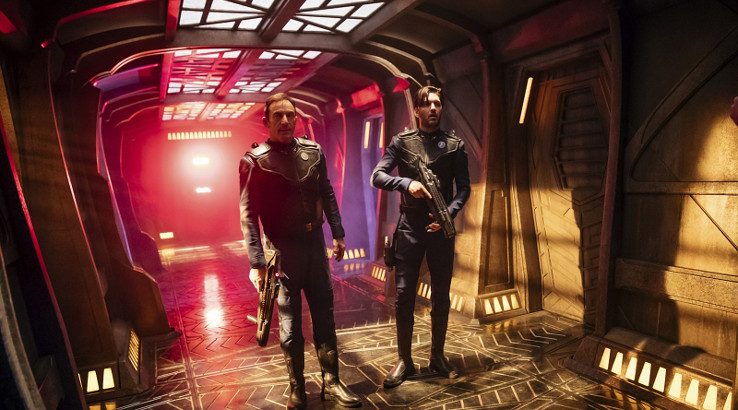 Just as Burnham is making her introductions, a mind-meld distress call from Sarek rips reality out from under her. Her foster father is in an extreme state of delirium, so his katra is extremely hostile. Before she is hadokened out of his mind, Burnham recognizes the scene of what may be his last thoughts. Sarek lingers on the memory of his daughter’s fateful Expeditionary Group graduation day. Despite acing the tests, the foster child is deemed too human to be permitted entry. This painful memory, combined with the Suus Mahna arse-kicking, makes Burnham feel like more of a failure than ever.

When Lorca flips the bird at protocol and mounts a rescue mission, Tyler – the survivor of a few near-death calls – offers Burnham a different interpretation. He posits that Sarek’s mind isn’t attacking her out of hate, it’s protecting itself out of fear and shame. At the end of our lives, we most often think about what we’d want to change about ourselves, not others. Sure enough, when Burnham reestablishes a link she’s shown a behind-the-scenes conversation between Sarek and the head of the school. The facility is uneasy about having too much half-Vulcan diversity too soon. Vulcan Dumbledore suggests compromise and offers Sarek a choice: he will admit only one of his family members – Burnham or his younger son, Spock (awesome original series mention #2!).

We all know how that decision panned out: ironically, Spock opted to go to Starfleet Academy anyway (you really zigged when you should have zagged there, Sarek). Reconciled by the true version of the memory, Burnham and her ashamed father form a stronger link. Sarek regains consciousness just long enough to smack the transponder beacon and the Discovery team exfil him. Subplot-wise, the damaged Captain Lorca is starting to show some serious cracks. Firstly, he’s impulsive and reckless – something that earns him a personal visit and reprimand from Admiral Kat Cornwell. Discovery is an extremely important Starfleet asset, but she’s concerned he’s treating it like his own fiefdom. Cornwell considers relieving him of command, but he’s passed all of the psych exams (and besides, they’re friends who go way back). Yes, sir, just some old pals who end up necking a bottle of whiskey together and engaging in, shall we say, “docking procedures”.

Post-coitous snuggling doesn’t go smoothly, however. When Cornwell inspects the scarring on Lorca’s back, he wakes in fear and quick-draws a pillow phaser on her. Clearly he lied on the psych tests that were issued after the loss of the Buran. His obsession with war – and also possibly his love of tribbles – are warning signs of impending disaster. Cornwell flips and leaves, but not before saying there’s a demotion in his near future, right after she attends this truce meeting on behalf of the wounded Sarek.

And, wouldn’t you know it, the meeting is a complete ruse; the on-site Klingons shank everybody but the Admiral. These so-called independent houses are in league with General Kol, the ambitious git who broke away from the unified Klingon effort and stole their cloaking tech. Uncharacteristically, Lorca doesn’t cowboy up and teleport in to mount a rescue. Much to First-mate Saru’s surprise, he decides to confer with Starfleet first. Is Lorca trying to turn a new leaf and prove he can play ball and follow procedure? Or is the good Captain anything but? Admiral Cornwell, you might be about to have yourself an accident.