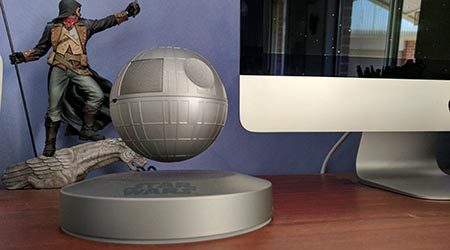 That’s no moon… It’s a Bluetooth speaker from Plox, and it is most definitely on the Dark Side of audio quality.

It turns out that the true power in the Galaxy isn’t Emperor Palpatine, or Darth Vader, or even the Force. Instead, it’s the Disney marketing team’s merchandising arm, which manages to create some of the craziest and most impressive Star Wars-branded products.

This time around, Disney has partnered with accessory manufacturer Plox to create what seems to be impossible: A Death Star shaped Bluetooth speaker that uses the Force (or some strong magnets) to levitate about an inch above its base.

Is the Force strong with this speaker? Not so much.

There are two main parts to the speaker: the large, heavy magnetic base and the Death Star itself. Sadly, both parts require independent power sources.

The base needs to be plugged into the mains to power the magnetic field that keeps the speaker floating, while the Death Star has an internal battery with enough juice for about five hours of playback, which needs to be charged via MicroUSB (and annoyingly the cable is not included). 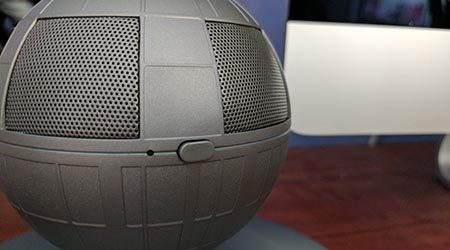 You can take the Death Star speaker with you and use it independently of the base. But that takes away the real cool factor of the device, and leaves you with what amounts to be a sub-standard speaker.

Admittedly, the speaker does look incredible. It may feel a bit plasticky, but the dull grey paint is mesmerising to watch as it spins unaided in space. The concave dome where the laser merges to destroy planets is intricately detailed, and with the right lighting you could almost use this as a prop for your own Star Wars fan film. 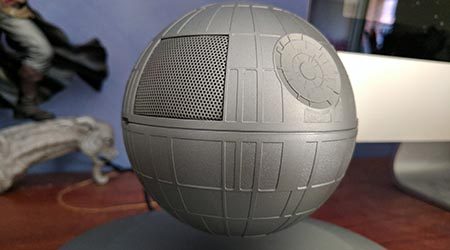 Downsides: Why you might not want the Levitating Death Star Speaker

This is a product for Star Wars fans only. If you saw Rogue One and immediately added it to a personal ranking of the best Star Wars films, then you would appreciate the design of this device.

And to be fair, while the Death Star does a poor job of being a speaker, the cool factor of this being a floating Death Star cannot be understated. As a desk ornament it may be pricey, but it is an incredible feat of design.

If you’re after a Bluetooth speaker, something like the UE Boom 2 or the Bose Soundlink Mini II would be much better investments from an audio perspective. But then again, neither of those float in space.

The Plox Star Wars levitating Death Star speaker is available online through Plox’s website, or you can pick it up for around £189.99 through ebay.

<p>Here’s what you need to know about…

<p>Book a memorable trip to a galaxy far, far…

<p>In the market for a new laptop? Feast your…

<p>If you’re searching for a cryptocurrency…

<p>Find out whether your favourite studio is…

<p>Should you upgrade to the latest…