From the new models of Apple's popular iPhone to the cheaper and smaller HomePod Mini, here's what you need to know about the "Hi, Speed" Apple iPhone 12 launch.

As expected, Apple used its “Hi, Speed” event this morning to unveil its 2020 line of iPhones, as well as a new and much more affordable model of its HomePod speaker, the HomePod Mini. Here’s everything Apple announced and what you need to know about the new iPhone range.

Which new iPhones are available? 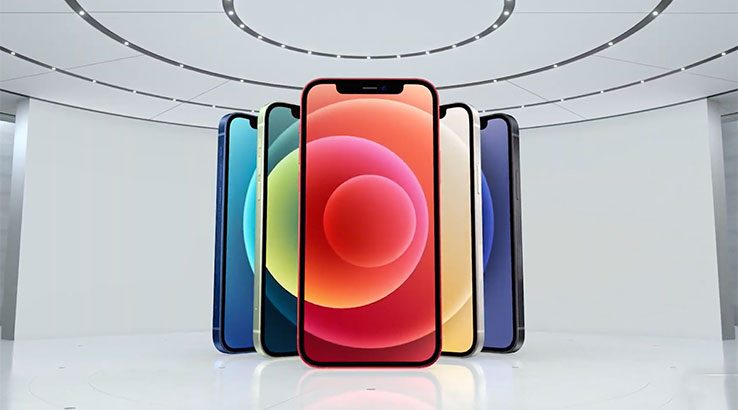 At the baseline, there’s iPhone 12, a phone with a design that’s strongly reminiscent of the more solid lines of the classic iPhone 4. It’s a phone with a 6.1-inch “Super Retina XDR” OLED display available in five colours. Apple loves its “retina” marketing term, although with the shift to OLED it’s offering a bit more in terms of screen resolution and contrast ratio than previous years.

Apple’s claim is that the Corning glass on the Apple iPhone 12 is stronger than anything else on the market, a process it calls “Ceramic Shield”. Apple says that it’s four times better at surviving drops than other phones. 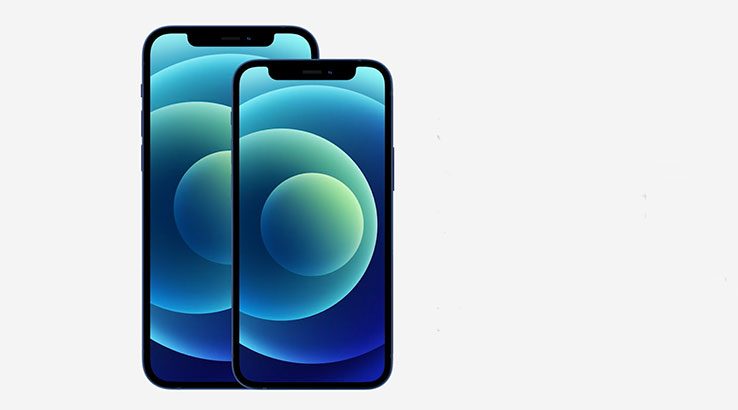 Then there’s the even-smaller iPhone 12 variant, the iPhone 12 Mini. This runs on the same essential hardware as the iPhone 12, but with a smaller 5.4-inch display. Apple’s claim here is that it’s the smallest 5G phone in the world, but otherwise, the experience should be the same, and it’s just a matter of what size phone you want. Both the iPhone 12 Mini and iPhone 12 will be available in blue, green, black, white and (PRODUCT)RED finishes. 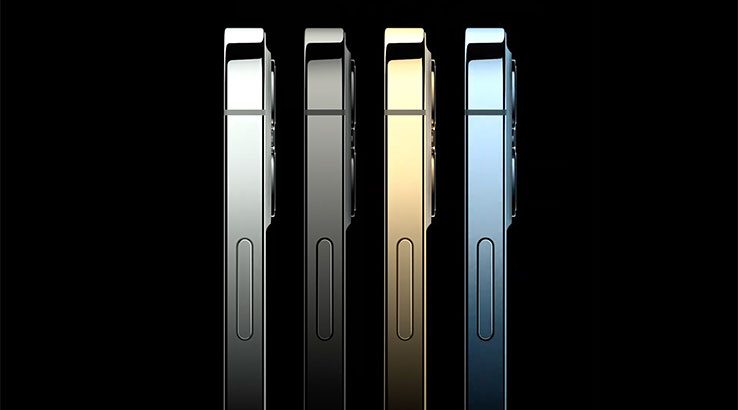 Are the new iPhones 5G-capable?

They certainly are – Apple CEO Tim Cook described the shift to 5G as “A step change in what we can do with our iPhones” at the launch event. The phrase “5G just got real” also got a solid if rather overhyped workout too. 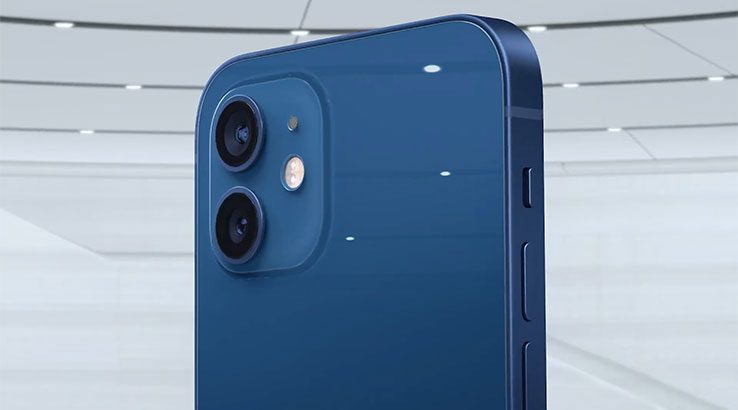 What’s interesting here is that every single model in the new iPhone 12 range is 5G-capable, with no lower-cost 4G-only models in the new line-up.

Apple’s claim is that its iPhones are capable of taking on more 5G bands worldwide than any other phone. Apple’s new “Smart Data Mode” will switch between 5G and 4G LTE depending on user need (and of course network availability) to maximise battery life, which is an interesting conceptual feature if nothing else. It’ll be fascinating to see how well it plays with networks where 5G isn’t available across every plan.

Being US-centric, there was a focus on American 5G networks, as well as on mmWave networks. For what it’s worth, Verizon, a US network, claims it can hit up to 4Gbps down and 200Mbps up on its network using the new iPhone models. Apple’s claims around worldwide compatibility mean that it should be 5G-capable for networks like those already deployed in the UK as well.

Will the new iPhone 12 be faster? 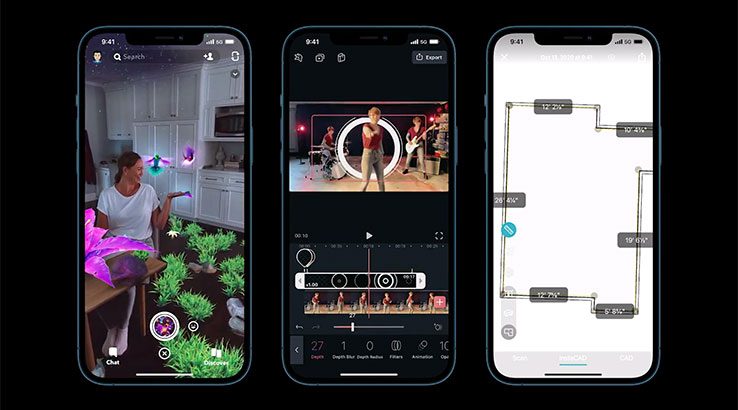 It certainly should be. Apple is basing the new line on its new A14 Bionic processor, built on a 5nm process technology. That smaller transistor size should make for a more power-efficient chip with 11.8 billion transistors, up 30% compared to the A13 Bionic, which was already outpacing anything else in the market in straight-line benchmarking terms.

As an example of how powerful the iPhone 12 will be, Apple also announced that League of Legends would be coming to iOS, in the form of League of Legends: Wild Rift, although it’s fair to bet that this title won’t only be limited to the new iPhone 12 range.

What about the new camera features? 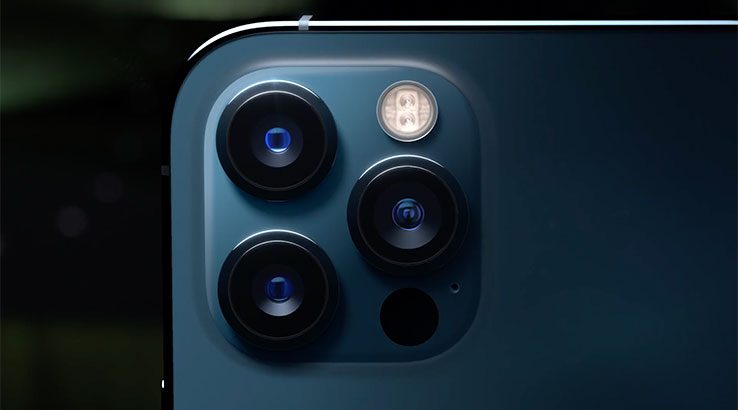 Camera technology has long been a big selling point for Apple and again there’s a big differentiation between the entry-level iPhone 12 models and the Pro lines.

The iPhone 12 and iPhone 12 Mini feature a dual-camera system, pairing a 12MP wide and 12MP ultra-wide lens, with a claimed improvement in low-light performance over prior models. This includes a new Night Mode Time Lapse feature, although you’ll need a tripod to take advantage of that.

It’s in the iPhone 12 Pro and especially the iPhone 12 Pro Max lines that Apple is really pushing its photographic capabilities. Both Pro phones feature a triple-lens camera system with ultrawide, wide and telephoto lenses. Predictably they’re a little bit sharper and nicer on the Pro Max phone, at least according to Apple. This includes a 12MP Telephoto lens – 52mm on the Pro and 65mm on the Pro Max – with 2.5 optical zoom capability and a 12MP Wide f/1.6 lens with an astonishing sounding 87% boost to low-light capability. That’s a big boost, but then Apple has somewhat lagged behind the very best in the market when it comes to night shooting.

Apple first introduced LIDAR on the iPad Pro line, but it’s now coming to the iPhone 12 Pro line, used for depth sensing in both photography and for AR apps.

It’s in the video space where Apple made the most noise, with the capability to record in 10-bit HDR and Dolby Vision HDR for the first time on any smartphone. That shooting capability even extends to editing on board the phone, which should at least give the phone’s new A14 Bionic processor a heavy workout.

What else is new for iPhone 12? 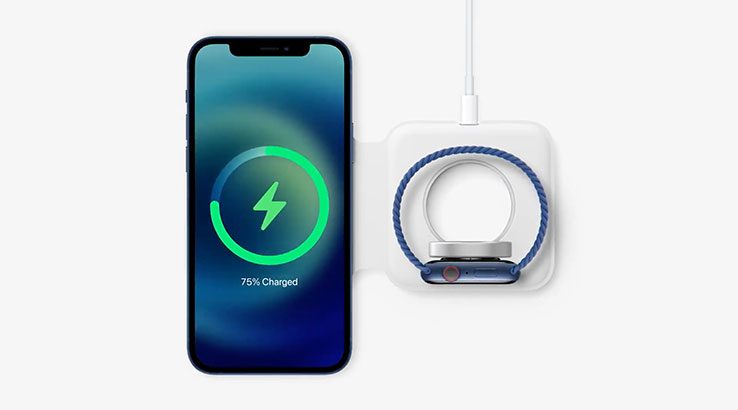 Long-term Apple MacBook users might fondly remember its MagSafe chargers, which used a neat and very convenient magnetic connection for power. Before you get too excited, it’s not coming back to MacBook, but it is coming to the iPhone line for the first time. Compatible MagSafe accessories, which at least Apple and Belkin will sell, will magnetically “snap” to the back of the iPhone 12 devices for more accurate wireless charging experiences and up to 15W wireless Qi charging. 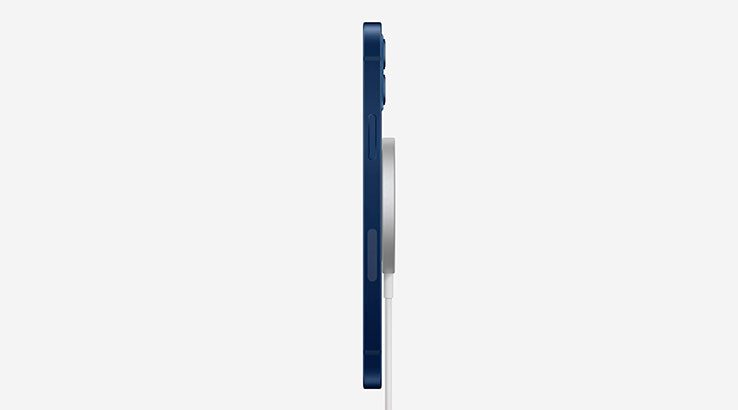 Apple showed off a standard MagSafe disc charger, a MagSafe Wallet and a MagSafe Duo Charger for iPhone and Apple Watch, slightly reminiscent of the AirPower charger that it at one time was going to bring to market. However, we’ll have to wait a while for that MagSafe Duo Charger, with Apple noting that it will come to market “at a later date”. Here’s hoping it doesn’t meet the same fate as the AirPower charger.

If wireless charging isn’t your thing, the iPhone 12 line-up still supports wired charging, using Apple’s own Lightning connector at the phone end, although the other end is USB-C. While you will get that cable in the box with the new iPhones, what you won’t find is any kind of wall charger, or for that matter headphones. Apple says it’s smaller and more environmentally friendly this way. Apple will still sell those products, but you’ll have to buy them separately.

When will the new iPhones launch in the UK? 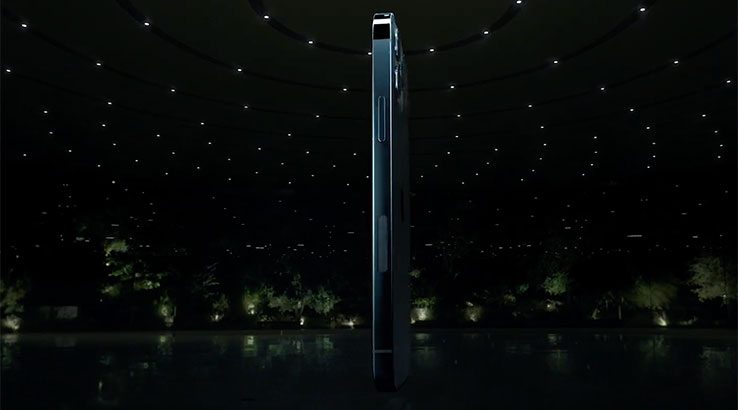 The iPhone 12 and iPhone 12 Pro will go on pre-order from 11pm AEDT this Friday 16 October, with actual availability on Friday 23 October.

The new MagSafe Charger and Leather Wallet with MagSafe accessories will be available from 16 October, while the MagSafe Duo Charger will arrive “at a later date”.

How much will the new iPhones cost in the UK?

Inevitably the iPhone 12 family will be available on all the major phone networks in the UK and we’ll update as soon as those plans are available.

The answer there is yes, but only to some of its lines. The Apple iPhone SE 2020 is still available, as you’d expect, but joining it in the lower-cost iPhone line-up is the iPhone 11, as well as the older iPhone XR. Where Apple has in prior years reduced previous iPhones to a single storage capacity, you can still order the iPhone 11 in 64GB, 128GB and 256GB capacities, while the iPhone XR ships in 64GB and 128GB capacities.

What else did Apple announce?

Early on, rumours had suggested that Apple might launch everything from its “Apple Silicon” MacBook lines to its Apple Tile competitor to new Apple Studio Headphones, but it seems as though Apple wanted to keep a sharp focus just on the iPhones for now, with the only new product announced being an updated and smaller Apple HomePod Mini. 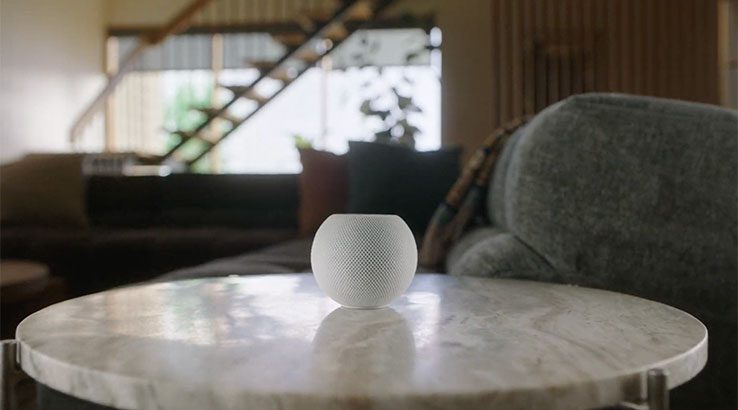 HomePod Mini is, as the name suggests, a smaller HomePod smart speaker with a much more spherical design than the original “full fat” HomePod Mini. It features an ambient lit touch display on the top and as you’d expect, access to Apple’s Siri assistant and Apple’s HomeKit for smart home features.

Apple’s claim is that the HomePod Mini uses a pair of bass radiators and that its round shape delivers consistent audio through 360 degrees, as is the case for the existing larger HomePod. Like many of its competitors, Apple’s claim is that it delivers better sound than its competitors and like any other smart home audio solution, you can set multiple HomePod Minis to play the same song, or pair them for stereo sound. 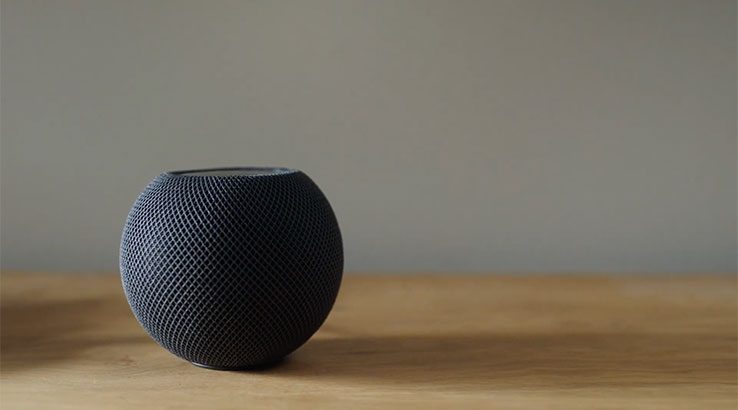 Later this year Apple will also release an update that synchronises the HomePod Mini with any nearby iPhone, but this won’t be available at launch. In terms of Siri, HomePod Mini will be able to access and utilise apps on a paired iPhone for sending messages or other interactive activities.

Apple is also borrowing the “broadcast” feature already available in Google Smart speakers, although it now calls it “Intercom”. It will work across other Apple devices in your home as well, although on iOS and iPadOS devices it will appear as a notification rather than an audio file.

When will Apple HomePod Mini be available in the UK?

The Apple HomePod Mini will go on pre-order in the UK on 7 November, with on-sale availability from the week beginning 16 November 2020.

How much will Apple HomePod Mini cost in the UK?

1.4 million customers to stop using bank branches due to COVID-19 Get cosy at home with Very autumn accessories