If you’ve ever heard of cold storage, then you probably know a thing or two about Armory. Before the Armory wallet, cold storage was mostly a theoretical subject that had very few real-world applications.

The development of cold storage capability has made Armory an instant hit in the cryptocurrency community. High-end security features and an open source protocol have also made the wallet popular among developers.

This wallet isn’t available through Finder right now, but there are plenty of other cryptocurrency wallets for you to consider.

Armory is widely regarded as one of the most secure Bitcoin wallets available. Through a combination of robust security features and a user-friendly interface, it’s designed to help individuals and businesses safeguard and manage their Bitcoin tokens.

Amory allows you to set up multiple wallet addresses so that you can easily separate your personal Bitcoin account from your business holdings. The function of sending Bitcoin can also be password-protected, giving you an added layer of security.

Armory is free to install and use. Sending Bitcoin over the blockchain network is subject to a transaction fee, which is set by the network itself. As a general rule, the network discourages sending less than 0.01 BTC by requiring a fee.

Adding and receiving Bitcoins is straightforward with Armory. To receive payments, you must first have a Bitcoin wallet. To send payments, you’ll need to have Bitcoin in one of your wallets. The “Balance” column lets you know how much Bitcoin is available.

When it comes to security, few Bitcoin wallets can compete with Armory. The wallet provides multi-signature support and decentralised lockboxes, which gives users full control over the creation and storage of cryptographic keys.

By enabling cold storage, the only way to lose your Bitcoin is if someone physically stole your offline system, such as your offline computer. But even then, they’d have to penetrate Armory’s sophisticated wallet encryption, which the company says could take centuries to achieve.

Armory is also popular because it works with something called the Glacier Protocol, which is one of the most well-known cold storage systems for Bitcoin. 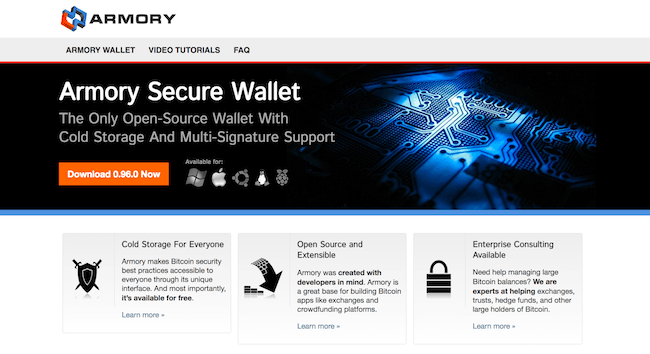 To get started with the Amory Bitcoin wallet, simply head over to their website and download the app. After downloading the wallet and creating an account, you should get up to speed with the platform’s advanced security features and learn about all your options.

Sam Bourgi is a contributing writer to Finder.com, where he specializes in financial markets. He has spent the past nine years focused on economics, markets and cryptocurrencies. His work has been featured in and cited by some of the world's leading newscasts, including Barron's, Yahoo, CBOE and Forbes.