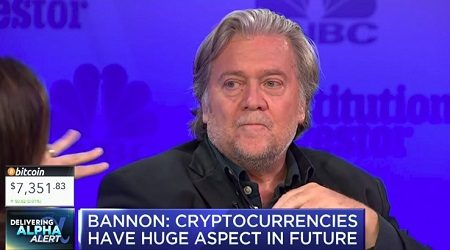 Bannon realizes that there are problems associated with digital currencies but is optimistic for the future.

President Donald Trump’s ex-political advisor Steve Bannon has proclaimed his fondness for digital currencies and has revealed that he is working on the development of global utility tokens for the “populist movement”.

“I like bitcoin… I own bitcoin,” Bannon declared during a recent interview with CNBC.

“I think cryptocurrencies have a huge aspect in the future,” he said.

“I’m working on some tokens now, utility tokens, potentially, for the populist movement on a worldwide basis.”

However, Bannon said that he understands that there’s problems with the way cryptocurrencies are used.

“They have to be quality,” Bannon said. “The problem is that there’s been too many investors that have been blown out by things that were not thought through.”

Bannon’s initial interest in cryptocurrencies was first reported in June by The New York Times.

At the time, Bannon revealed that he had private meetings with cryptocurrency investors and hedge funds to discuss launching ICOs via his investment organization, Bannon & Company. He also considered naming one of these digital currencies the “deplorables coin”, referencing Hillary Clinton’s description of Trump supporters.

A number of celebrity-backed ICOs have popped up in recent months, some receiving scrutiny from authorities.

For example, the New Jersey Bureau of Securities issued a cease and desist order against Bitcoiin, otherwise known as Bitcoiin2Gen (B2G). In February, the company enlisted actor Steven Seagal as its brand ambassador.

However, in late March the founders of the controversial cryptocurrency, along with Seagal, withdrew their association with the cryptocurrency company in order to reportedly help establish total decentralization.

Wu-Tang Clan, a hip-hop collective from Staten Island, New York City, are revered as one of the greatest rap groups of all time. One of the founding member’s offspring, Young Dirty, decided to launch a cryptocurrency.

Low-cost carrier AirAsia is considering entering the cryptocurrency space through the launch of an initial coin offering (ICO) which would become part of the Southeast Asian airline’s BIG Loyalty frequent flyer program.