Planning to visit the Hagia Sofia or Anzac Cove? Protect yourself on your Turkish adventure. 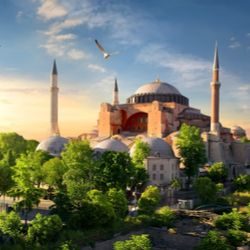 A gateway between Europe and the Middle East, Turkey is home to a bustling blend of cultures and host to centuries of unique history from both sides of the Mediterranean, offering unique man-made landmarks and a diverse range of natural attractions, adventure tourism and resort-style relaxation. It’s also currently a risky place to visit, so make sure you pick up a travel insurance policy before you leave to keep you safe.

What does travel insurance for Turkey cover?

Dangers to be aware of in Turkey

As mentioned above, Turkey is a country that the US government currently considers risky for travelers. Travel insurance can help protect you against financial ramifications, but caution is always your best first line of defense. Risks to be aware of include:

There are six destinations in Turkey that have become particularly popular with travelers. However, they are not without risks that you should be aware of.

Turkey has a robust network of private hospitals, many of which have agreements with different insurers so you can access them with travel insurance. There are plenty of medical facilities and options in Turkey, and both public and private hospitals can be expected to provide effective treatment. Whether you’re visiting as a tourist or for business, you need to know how your travel health insurance policy will work. Note the following:

Tips for traveling safely in Turkey

When traveling in Turkey:

Whether you’re going to visit Istanbul for a weekend before continuing on to Dubai or spending a month traveling around the northern part of the country, Turkey is undeniably beautiful and full of adventure. Unfortunately, it’s also full of risks — pick up a travel insurance policy before you leave to help keep you, and your wallet, safe.