Thetan Arena: How to play and earn

A new, free-to-play MOBA crypto game based on the blockchain. Thetan Arena is a blockchain-based multiplayer online battle arena — or MOBA — game whose active gameplay heavily relies on skill. It also has elements of the battle royale genre. It incorporates non-fungible tokens (NFTs) as heroes that you can collect and potentially profit from, with goals that differ by arenas you join. And it offers a free-to-play model. 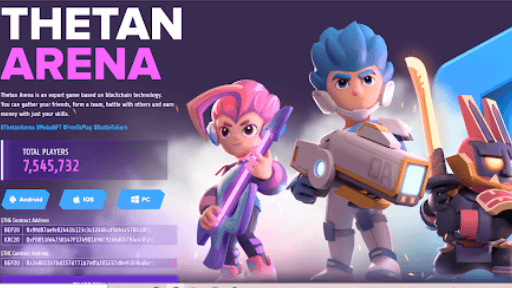 What is Thetan Arena?

Thetan Arena is a popular multiplayer online battle arena (MOBA) game that set a record in late 2021 for 6 million active players only two weeks after its release. It incorporates non-fungible tokens (NFTs) in its gameplay in the form of heroes available on its marketplace, where you can also sell and trade limited characters to other players.

Stylistically, the characters are reminiscent of Splatoon — their chibi, cute design and short stature. Playwise, it’s similar to the popular MOBA game League of Legends, with its playstyle and isometric — or top-down — perspective.

Thetan Arena is built on the Binance Smart Chain, a blockchain network that runs parallel to the Binance Chain and is an alternative to Ethereum. You must connect to the game through the MetaMask browser extension and your MetaMask wallet for transactions.

The game’s economy is based on the in-game Thetan Coin (THC), which you earn by participating in matches and tournaments and earning ranked awards. You can exchange your earned THC, trade it or use it to buy Common or Epic Thetan Boxes.

The game also includes the exclusive currency Thetan Gem (THG), which is used to evolve heroes and staking. It has a maximum supply of 420 million THG and is worth $7.80 USD at the time of writing, according to CoinMarketCap. You can use THG to buy limited Legendary Thetan Boxes.

The game is free to play, which gives newbies looking to break into crypto games an opportunity to try it before you buy it.

You’re given one normal hero — Raidon — at signup for active gameplay in game modes that include:

The free, normal hero offers fewer opportunities to earn money, and you can’t buy, sell or trade it as you would with premium heroes. But you can use your free hero to progress through the ranks, ultimately earning second and even third heroes if you hit the higher ranks.

Games can be played solo, in pairs or in teams of four, and you can team up with friends. If there aren’t enough live players to fill out a match, non-player characters (NPCs) are added to fill up the roster. Don’t expect an NPC to match a live player’s skill, though, as many players report that NPCs aren’t so great in team matches.

For an in-game advantage, purchase heroes that better fit your playing style, which requires sinking crypto into the game. Or, you can earn enough tokens to purchase premium heroes with your gifted normal hero at signup.

How does play-to-earn work with Thetan Arena?

If you’re a beginner, the easiest way to start earning is by participating in matches. You can build in other play-to-earn methods as you improve your skills and earn more tokens.

The NFTs on Thetan Arena are heroes that you can buy and sell on the Thetan Marketplace.

Thetan Arena heroes are varied and come equipped with their own special skills — like the ability to freeze enemies or burrow underground — that you can choose to fit your play style. The 25 available characters fall within three rarity levels, three different classes and three skin rarity levels.

In addition to your hero’s level, their skin influences battle rewards. There are three different skins available for each hero. The rarer a hero’s skin, the more likely you are to earn extra battle rewards:

Heroes are categorized within one of three classes:

Thetan Arena Review: Why is this NFT game so popular?

How to buy heroes

You’re gifted Raidon at signup for free and immediate play. Play it in enough battles and earn enough in-game THC, and you just might be able to level up to two additional free heroes — and even premium heroes, if you can earn enough tokens.

To buy premium heroes, you must head to the Thetan Marketplace to buy heroes with wrapped BNB or buy Thetan Boxes with THC or THG.

Buying heroes on the marketplace

You need Wrapped BNB (WBNB) to buy NFT heroes on the marketplace, which requires swapping out your BNB for WBNB in your MetaMask wallet. The transaction or “gas” fee is typically around $0.10 USD per transaction but can fluctuate greatly.

With WBNB in your wallet, look through the hero selections, sorting by cost, hero class or rarity to pick the characters you want to buy. Once you choose a character and complete the transaction, the NFT hero appears in your wallet.

Thetan Boxes are like loot boxes that you buy to get characters.

Choose from among three types of boxes:

Before you purchase a box, check the Drop Rate Detail, which lets you know what level rarity levels NFTs you could get and the available characters based on the box you choose.

Legendary Boxes are limited, and cost depends on a formula based on the THG real-time rate:

Thetan Arena’s marketplace is open, so you can look through characters and choose the ones that best suit your play style. Collectors can also try their hand at buying and selling NFTs on the marketplace.

The value of an NFT varies widely, depending on health points, attack power, abilities and more. And the rarer a hero, the more it’s worth — and the higher the chance of earning bonuses in battle rewards.

If you’re into MOBA games like League and DOTA, the popular Thetan Arena could be for you. The game requires skill and active gameplay. The better a player you are, the more real cash you can earn. If you enter a match and let your character camp in Battle Royal, the shrinking map and other heroes are sure to knock you out of the game.

A big plus among play-to-earn titles is that Thetan Arena doesn’t require an investment to start. However, in-game purchases can get you stronger characters that you can sell and trade.

Bethany Hickey is a writer for Finder, specializing in car and life insurance. Before joining Finder, Bethany published around 800 auto finance articles aimed to help people make better car-buying decisions. She’s contributed to multiple automotive sites including CarsDirect, Auto Credit Express, Drivers Lane, and The Car Connection. She has a Bachelor of Arts in English from the University of Michigan-Flint, and has always been fascinated by digital content’s impact on current writing practices. When Bethany isn’t writing, she’s either crocheting or playing cozy games on her Switch.