Study Shows Singaporeans Are More Financially Literate Than They Think

Singaporeans are more financially literate than they think

And they also have the highest financial literacy rates in SEA as well! According to the 2019 GoBear study, Unlocking Financial Health in Asia: Creating a Financial Health Index, Singaporeans are leading SEA counterparts like Indonesia and Thailand, as well as Hong Kong, and the APAC region in financial health.

The study is a gauge for financial wellness, based on three major components: financial literacy, financial inclusion, and financial security. These pillars make up GoBear’s Financial Health Index.

Among the four markets surveyed, Singapore ranked highest across the board for financial literacy (78%), financial security (60%), and financial inclusion (51%) to earn a financial health index score of 68%.

The study also revealed that Singaporeans have a lower perception of their financial literacy compared to their actual understanding and savvy. In other words, Singaporeans know more about money than they think.

The research carried out from mid-August to early-September 2019 comprised a sample size of slightly more than 1,000 people. They were surveyed and interviewed to measure their perceived and actual financial literacy, financial inclusion, and financial security.

Participants in the study were middle-class individuals (household income group from SGD7,000), aged between 18 and 65 years; balanced across age groups and spread of gender, and had daily access to the internet.

To gauge the level of actual understanding of financial literacy, participants were asked questions related to financial concepts, e.g. the time value of money and inflation, etc.

And to measure the participants’ perception of their financial health, they were asked their opinions on related topics. For instance, “how would you describe your current financial knowledge vs. other people in your country?” or “on a scale of 0-10, how financially secure do you think you are currently?”. The study also included in-depth interviews with a financial expert.

The gap between the perceived and actual financial understanding for Singaporeans stood out with the majority being much more financially literate than they assumed.

The figures are roughly equal in terms of actual financial savvy between Singaporean men and women.

However, the study revealed a large gap of 22 points between the actual (81%) and perceived (59%) financial literacy for the women surveyed.

Singaporean men, on the other hand, showed a smaller gap between their actual (83%) and perceived (70%) financial literacy score. 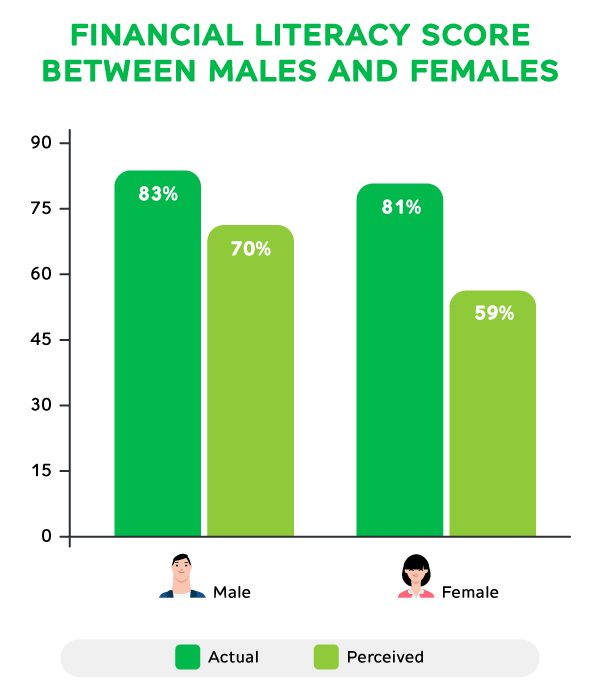 The gap difference between Singaporean men and women is rather significant at almost 10%, perhaps indicating that men are more confident about their financial savvy when compared to women. And this lack of confidence may also explain why women are moreconservative when it comes to investing.

Another key difference between Singaporean men and women in the realm of financial wellness relates to what motivates them to save.

After saving to clear off debt and achieve financial independence, the men were mostly motivated to put money aside for retirement, whereas Singaporean women prioritised saving for education.

More key takeaways from the study

The study comprehensively revealed a great deal about the financial behaviours and attitudes of Singaporeans. Here are some of the more interesting findings extracted:

What motivates Singaporeans to save?

Saving is a top priority for Singaporeans with almost 80% of participants saving their money in a bank account. But what exactly are they saving for?

According to the study, retirement, financial independence, and emergencies are major motivators for Singaporeans to save.

Family obligations, education, debt, and future lifestyle rank on the lower end of the spectrum and may be considered less of an incentive to save.

As mentioned, education is one of the top motivators for women, but in general, it appears to rank as the lowest priority for the sample surveyed.

One of the reasons why women are prioritising education might be linked to the percentage of female graduates with tertiary education increasing relative to population.

The World Bank in 2016 charted Singaporean female grads at 52.18%. Now even though there are more men than women at university in Singapore; this could be due to a difference in population, as men outnumber women 1,020 to 1,000

Another reason could be that women in Singapore are still earning 6% less than their male counterparts (though the gap is narrowing), and thus, continuing education might be viewed by women as a way to increase earning potential.

Note also, that education in the context of the study also includes education for children, and it is likely that women are accounting for the future cost of their children’s education when they save.

Along with those from Hong Kong, Singaporeans as well expect to retire at least three years later than those from Indonesia and Thailand. The expected average retirement age for Singaporeans is 61.2 years.

The most likely reason for the relatively delayed retirement age is linked to a disparity between the cost of living and wages earned.

54% of the middle-class income earners in Singapore that were surveyed noted that the cost of living is outpacing earnings.

Sadly, 13% of respondents took a slightly bleaker view on retirement, expecting to never be able to retire. This again coincides with the cost of living vs. earning potential problems that could see a segment of Singaporeans working their entire lives to simply sustain.

Singaporeans feel the need to be self-reliant

This might explain why Singaporeans prioritise savings and emergency funds (55%) for which they can live off for six months or more in case of loss of income, compared to Thai (44%) and Indonesian (37%) respondents.

So even though Singaporean respondents are less confident about their financial health or perceived financial literacy, they appear to be better prepared with contingency plans (a stocked emergency savings account) to withstand income loss.

How to further improve your financial health

Even though Singaporeans are relatively financially literate and healthy, there’s room for improvement.

The study identified at least three areas — investing, retirement planning, and enhanced financial literacy — that deserve more attention if Singapore is to keep it up and advance their score on the financial health index.

According to Singapore’s qualitative expert in the study, many people are still too conservative and want to feel their money. In the context of investing, Singaporeans haven’t explored investing as a method of growing their wealth at a level that is in line with their earnings. Although, comparatively they do hold more investments products than Indonesians or Thais, who prefer to invest in physical assets like gold or property. Still, if you aren’t already investing or are investing very little; it might be time to consider how to use investment to grow your wealth.

Even with a relatively high financial literacy rate, 40% of Singaporeans are aware that they aren’t optimising their finances — or getting their money to work for them. 25% don’t know when or how to get started planning for retirement. Adding to this, those below the age of 35 are likely to spend more than they should, and half of the Singaporean millennials expect that they will still be carrying debt when they retire. Thus, there is an urgency to plan for retirement as soon as possible, especially for millennials, as according to the study, the average age of those who have not started financial planning at all” is 30 years old.

While Singaporeans can easily access information about wealth and personal finance online, it lacks a significant presence on social media sites like Twitter, Facebook, Instagram and the like. At the same time, these are the spaces where the younger Singaporeans are spending their time and giving their attention. Introducing finance as a topic of conversation for youth, and engaging their interests can be an effective way to educate about finance.

Was this content helpful to you?
Thank you for your feedback!
When to Start Financial Planning? Study Shows Singaporeans Start at Age 41 Work from Home (WFH) Lessons Learned From The Circuit Breaker in Singapore