Best hybrid cars in Singapore: How much fuel do you save?

Reliable, fuel efficient, environmentally friendly and boasting everyday usability, hybrid cars are the sustainable vehicles for eco-friendly drivers. A hybrid car uses petrol or diesel and combines it with electric power. It does this by having one or more electric motors which assist the conventional petrol or diesel engine.

And with ever increasing options, leaner and meaner designs and better performance, hybrid cars are shedding their plain vanilla image and giving their conventional counterparts a run for their money.

Here are some of the best hybrid cars in Singapore to consider, as well as how much fuel a hybrid car could help you save.

How do hybrid cars work?

Hybrid cars feature a petrol or diesel engine, an electric motor and a small battery pack. Once you step down on the accelerator, the regular engine kicks in. As the engine runs, this kinetic energy is sent to the battery pack, also known as the generator, and the electric motor stores this power.

This is sometimes referred to as “self-charging”. Once the car starts to accelerate again, the electric motor is powered by electricity from the batteries, helping the car gain speed.

Advantages and disadvantages of hybrid cars

So, how do they compare to regular cars? What are the pros and cons?

Pro #1: Save on fuel expenses

Hybrid cars run on petrol or diesel just like conventional cars, but every time you coast along, drive at a moderate speed, or get stuck in traffic, the electric drivetrain kicks in so you don’t burn fuel. In this way, hybrid cars can travel further distances on less petrol and also reduce exhaust emissions.

With the electric motor assisting the engine, the latter does not have to work as hard to generate sufficient torque to get going. As such, there is less load on the engine and it will experience less wear and tear over time.

Hybrid cars also have regenerative braking systems that can reverse the function of the electric motors and generate electricity while slowing the vehicle down. This translates to more lasting brake pads.

Hybrid cars have two drivetrains and an electric motor that assists the petrol engine, giving you some extra power when you need it, such as when you are overtaking some cars on the road, or accelerating from a standstill.

While hybrid cars are lower maintenance, they are more expensive to repair if they break down. This is due to the presence of two engines in the car which makes it more complicated to repair. The technology used in the hybrid car to achieve great gas mileage and low emissions is also more complex and costs more to maintain.

How much do you save if you drive a hybrid car in Singapore?

Under the Vehicle Emission Scheme (VES), cars with low pollutants like hydrocarbons (HC), carbon monoxide (CO), nitrogen oxides (NOX) and particulate matter (PM) will qualify for rebates up to $20,000. For the top tier of the rebate, only fully electric vehicles will qualify for a $20,000 deduction.

The amount of your VES rebate depends on the type of hybrid you purchase and how well it manages emissions. Under the VES, if you register a car or taxi under bands A1 and A2, you will qualify for an emission rebate which will be used to offset the car or taxi’s Additional Registration Fee (ARF).

If you register a car or taxi under bands C1 and C2, you will have to pay an emission surcharge instead. 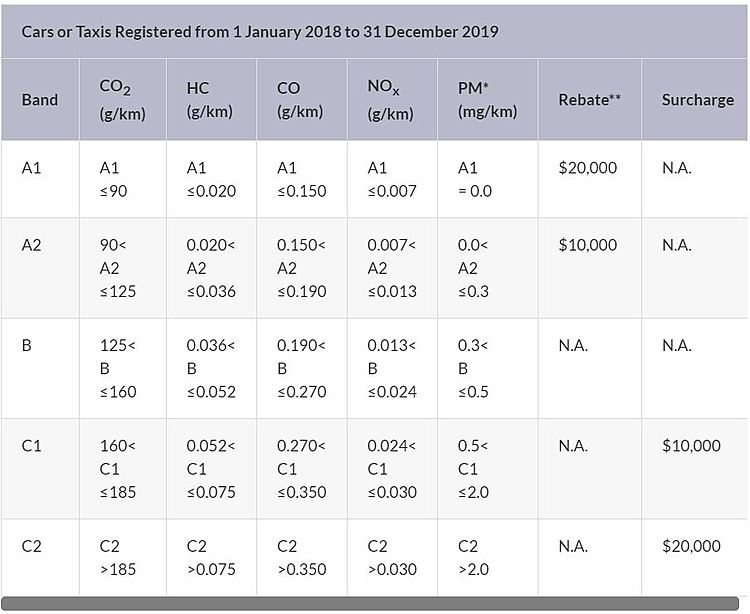 And if you register an electric or plug-in hybrid car or taxi from now to Dec 31, an emission factor of 0.4g CO2/Wh will be applied to its electricity energy consumption to rate its carbon emission.

Road taxes are calculated based on your car’s open market value (OMV). As hybrid cars are generally more expensive and have a higher OMV, you would have to pay a relatively higher road tax for them as compared to their petrol counterparts.

For a low cost hybrid car such as the Suzuki Swift Hybrid 1.2 RS, the road tax starts at $534.

But, the government has announced in 2020 that the current road tax scheme for electric vehicles and some hybrids will be revised from January 2021 onwards, resulting in lower taxes for these vehicles.

Going by fuel cost alone, hybrid car drivers do save more than those who drive cars running solely on petrol. Let’s compare the fuel cost of driving a popular Toyota Corolla Altis Standard vs Toyota Corolla Altis Hybrid. Let’s estimate that the average Singapore car travels 16,700km annually and round petrol costs up to $2.00/L after discounts.

The amount saved on fuel costs, while not substantial at each pump, can make a difference to your day to day expenses over a long period of time.

However, to find out how much you can truly save driving a hybrid car, we would also need to take into account its higher price tag.

The Toyota Corolla Altis Standard is priced at $91,888 while the Hybrid is $115,888. Without even factoring in road tax, car insurance, and car loan interest, we can already see that the amount you save on fuel will not be sufficient to offset the price difference of $24,000 for the hybrid car.

Private hire drivers have been known to clock up to 400km per day. This could push your fuel savings over 10 years in the region of more than $40,000, which would more than offset the high upfront cost of the hybrid car.

Diehard motorheads are unlikely to be thrilled with the idea of driving a hybrid. In the words of one purist, “I love cars for their dirty, oily, smokey, air polluting nature, and will never drive anything else, not even a Tesla.”

Enthusiasts who live for the majestic reverberating roar of their engines are also unlikely to take to the quieter, less exciting drives of hybrid cars.

In addition, those looking for a high performance car are also unlikely to be impressed by a hybrid car. Hybrid cars are generally heavier than an equivalent petrol car, and the additional weight tends to blunt handling and performance.

What about driving an electric car in Singapore?

Electric cars are another increasingly attractive option, especially due to the Singapore government’s push to encourage more EV usage to combat climate change.

Schemes will also be implemented to make EVs more attractive. For example, the Vehicular Emissions Scheme will be extended to light commercial vehicles.

Also, an early-adoption incentive scheme will be rolled out for EV buyers from 2021 to 2023. It will offer rebates capped at $20,000 per vehicle.

Some other reasons to go electric include the quietness of the ride, the silky smooth and instant acceleration. You’ll also get to enjoy lower running costs as electricity is significantly cheaper than petrol per kilometre travelled. And unlike hybrid cars, EVs have very few moving parts and are thus cheaper to service.

Was this content helpful to you?
Thank you for your feedback!
Costs of Owning a Motorcycle: License, Insurance and Prices AXA car insurance Singapore review (2020)