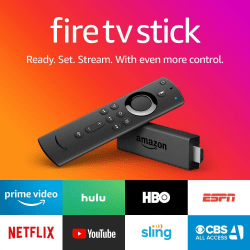 The Amazon Fire TV Stick is a streaming media player that lets you watch your favourite HD content on the big screen. If you’re an Amazon Prime and Alexa user and haven’t decided to move up to a 4K TV yet, the Fire TV Stick could be your best option.

The Fire TV Stick is the simplest and most affordable model from Amazon’s line-up of streaming devices. You can just plug the device into the HDMI port of your HDTV and use the new Alexa Voice Remote to start streaming thousands of channels and apps.

Read on to know exactly what the Fire TV Stick has to offer and find out why Amazon claims it as its bestselling streaming media player.

What is the Amazon Fire TV Stick and what does it do?

The Fire TV Stick was originally introduced back in 2014. Its second generation was released in 2016 with hardware upgrades to significantly improve its performance. Later in early 2019, the device was then reissued to include the new Alexa Voice Remote, an updated version of the remote from the 4K version of the stick.

The included new Alexa Voice Remote makes the Fire TV Stick an even stronger contender among its rivals in the non-4K streaming device competition. This special remote lets you easily find, launch and navigate content as well as control compatible smart home devices, like the Echo Dot speaker, with Alexa voice commands.

There is a volume rocker and a mute button below the menu and playback controls. There is also a little power button next to the built-in microphone on the top. You can control the stick as well as the volume and power on your TV, soundbar or AV receiver with Alexa voice commands.

The Fire TV Stick comes with integrated dual-band 802.11ac connectivity for the best possible Wi-Fi connection. However, like other streaming devices that use Wi-Fi, such as Chromecast or Apple TV, the video streaming quality critically depends on the speed and signal strength of your network. If you choose to have a wired connection, there is also an Ethernet adapter for Fire TV devices that you can get separately.

As the Fire TV Stick supports Bluetooth 4.1 technology, you can pair the streaming device with compatible Bluetooth headphones for private listening. In addition, there’s also the Amazon Fire TV Remote dedicated app for both Android and iOS. With an onscreen keyboard, a handful of playback controls and a voice search function with your device’s microphone, you can use your smartphone or tablet as your streaming companion.

What content is available for the Amazon Fire TV Stick?

The Fire TV Stick allows you to watch favourite content from thousands of channels and apps, including services like YouTube, Netflix, HBO, WatchESPN and Disney. You can also stream for free with Pluto TV, Tubi TV, IMDb TV and many others.

If you’re an Amazon Prime member, you can get unlimited access to the world of entertainment on Prime Video, including award-winning Amazon Originals, popular movies and TV shows, live events, sports and many more. These come with no extra cost to your existing Prime membership and no additional apps to download.

You can enjoy millions of songs through services like Amazon Music, Spotify and Apple Music. Some may require subscription fees. Browsing millions of websites on the big screen is also possible using Firefox or Silk web browsers.

Please note that at the time of writing (August 2019), Amazon is not officially supporting its streaming media players in Singapore yet. As a result, most of the apps available for the Fire TV Stick as well as other Fire TV devices are geographically locked to the US. If you want to maximise your streaming experience and enjoy all available channels, you will need a workaround, such as using a VPN.

What devices are compatible with the Amazon Fire TV Stick?

The Fire TV Stick is compatible with most high definition TVs with HDMI input, capable of 720p or 1080p video at 50/60Hz. These include popular HDCP-compatible models from brands such as Samsung, LG, Sony, Sharp, Panasonic, Pioneer, Vizio and many others.

How much does the Amazon Fire TV Stick cost?

The Fire TV Stick is not officially available in Singapore at the time of writing and there’s no indication the product will launch here. If you’re looking for one, you can buy the imported US version either through online stores like lazada.sg or through local retailers in major electronic centres such as Sim Lim Square.

You may be able to get it for around S$60, but prices tend to vary from one seller to another. Make sure to check the complete list of what is included in the box as well as what kind of warranty it carries before you buy.Back to top

Ardiansyah Lubis is an associate editor for Finder specialising in cryptocurrency, money transfers and Internet TV. Having an educational background of banking management and business administration, Ardi loves to write about finance and technology. He has also been a professional translator for almost a decade. When not tied to his laptop, he spends most of his time with his little family visiting interesting places and trying new food.