For most transfers, Remitly comes out on top for both fees and exchange rate. 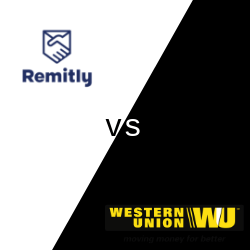 Western Union is one of the most well-known international transfer services in the world. But let’s see how it compares to Remitly, an up-and-coming provider, to see which transfer service can take your dollar further.

The fees and rates used in this comparison are accurate as of August 6, 2019.

Which has lower fees?

Remitly’s fees depend on the currency you’re sending, how much you’re transferring and the speed of the transfer. Higher fees are applied on express transfers.

If you’re sending through the slower option, the fees are generally between $2 and $4 and can even be free in some cases.

Western Union’s fees for an online money transfer vary greatly currency to currency and can either be a flat fee or calculated based on a percentage, so it’s vital to check the currency you’re exchanging using the Western Union price estimator.

Although there is a lot of variety with both, Remitly often has lower flat fees for slower transfers than Western Union.

To see how these two services stack up, let’s compare how Western Union and Remitly fare for two different transfer amounts to the Philippines. Keep in mind, rates vary for other countries.

In this example, we’ll be using the quickest transfer possible. This means Remitly’s express option and paying with debit card for cash pickup with Western Union.

Sending $100 to the Philippines

In both cases, Remitly ends up giving your receiver a few extra pesos in their pocket. Remitly offers both lower fees and a better exchange rate.

Remitly will normally add a margin to the exchange rates which varies for each currency. The margin varies from currency to currency

For example, if you want to send money to South Africa:

In this case, Remitly’s markup is about 0.9%

Remitly often runs promotions that offer an exchange rate better than the mid-market rate for your first transfer on certain currencies.

Western Union also adds a margin, but it tends to be quite a bit higher, ranging from 1% to 6%.

For example, if you want to send money to South Africa:

Remitly offers an express option that will get your money to the destination near instantly, but it does come with a higher fee. If you opt for the cheaper economy option, you’re looking at a transfer time of two to five business days.

Some Western Union transfers arrive the same day, while some take up to five business days. It also depends on the transfer and receiving method but in general, bank account to bank account transfers will take the longest and be the cheapest.

Both Remitly and Western Union can transfer your money quickly, but they also take up to five business days for some transfers.

Once you have an account with Remitly, you log in on either the website or through the app, then enter the amount, currency, recipient’s information and your payment information. After that, Remitly will convert your money and transfer it to your recipient.

After registration, open your profile and choose the “Send money” option. After you’ve entered your receiver’s details, which includes their bank name and code as well as their bank account number if a bank transfer, you choose your payment method. Once you’ve paid, Western Union will transfer the funds. You also have the option to send money in-store at an agent location.

Remitly offers both lower fees and better exchange rates, with the option to send money just as fast as Western Union. However, it doesn’t offer as many currencies as Western Union and this could be the deciding factor.

It’s a good idea to compare a range of international money transfer services before committing to any provider to make sure you’re getting the best deal possible.

Use our calculator below to compare additional providers and see if you can get a better rate elsewhere.

Isabel Sandercock-Brown is an international money transfers writer at Finder. She's written for a number of organisations, from the Salvos to Bumble. She has a Bachelor of Arts in Communications from the University of Technology, Sydney.