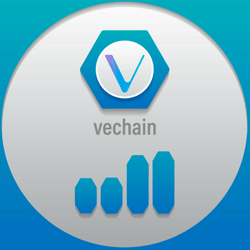 The network’s native token, VET, has attracted considerable interest from crypto enthusiasts and experienced substantial fluctuations throughout late 2017 and early 2018. To find out where its price could be headed next, it’s important to consider a few key factors.

Cryptocurrencies are complicated and volatile, and there are many factors that can contribute to the growth or decline of their price. With this in mind, it’s important to research and analyse those factors to form a clearer picture of where the value of a particular coin or token could be headed.

If you are thinking of buying VET, consider the following factors:

What key milestones are coming up in VeChain’s future? By far the most important development in the roadmap will be the launch of the VeChain Thor blockchain, which is expected to occur in June 2018. Thor will allow for the creation of dapps on the VeChain platform, and is a crucial phase in the project’s plan to become an enterprise-grade platform for these types of applications. Understandably, the launch will be watched with interest by many in the cryptosphere.

VeChain v4.0 is slated for Q4 of 2018 and is expected to feature the introduction of crosschain and sidechain technology, and IoT integration. By 2019, the team expects to be focused on the expansion of the VeChain Thor ecosystem.

Beyond 2022: What does the future hold for VeChain?

It will also be interesting to see what unfolds as VeChain faces off against its competitors, not only in the supply chain management field but also as a dapps platform. Ethereum is the current king of the latter and very well established, so becoming a viable competitor to the world’s second-largest cryptocurrency will be a huge challenge.

That said, if VeChain can continue its record of securing big partnerships, this will go a long way towards keeping it towards the pointy end of the competition.

The bottom line for VeChain is that there are both challenges and opportunities that lay ahead. The platform has a solid base, a working product and some impressive partnerships to its name. However, 2018 looks like being a huge year for the project and the official launch of VeChain Thor is one to watch. Monitor the latest crypto news and announcements closely and do your own research before deciding whether or not you should buy any tokens.

How to buy VeChain Was this content helpful to you?
Thank you for your feedback!
Best VeChain (VET) wallets

How to buy yearn.finance (YFI) in Poland

How to buy SingularityNET (AGIX) in Poland

If you want to know how to buy SingularityNET’s AGI tokens, where to store them and what the SingularityNET project aims to do, you can find out here.

How to buy NEXO (NEXO) in Poland

Want a comprehensive explanation of how to buy, sell and store Nexo tokens (NEXO)? You’ll find it here.

How to buy High Performance Blockchain (HPB) in Poland

Want to know how to buy and sell High Performance Blockchain tokens (HPB)? Find out in this handy guide.